Sept. 10 D10 Football: Night of Blowouts as Every Game Decided by Double Digits 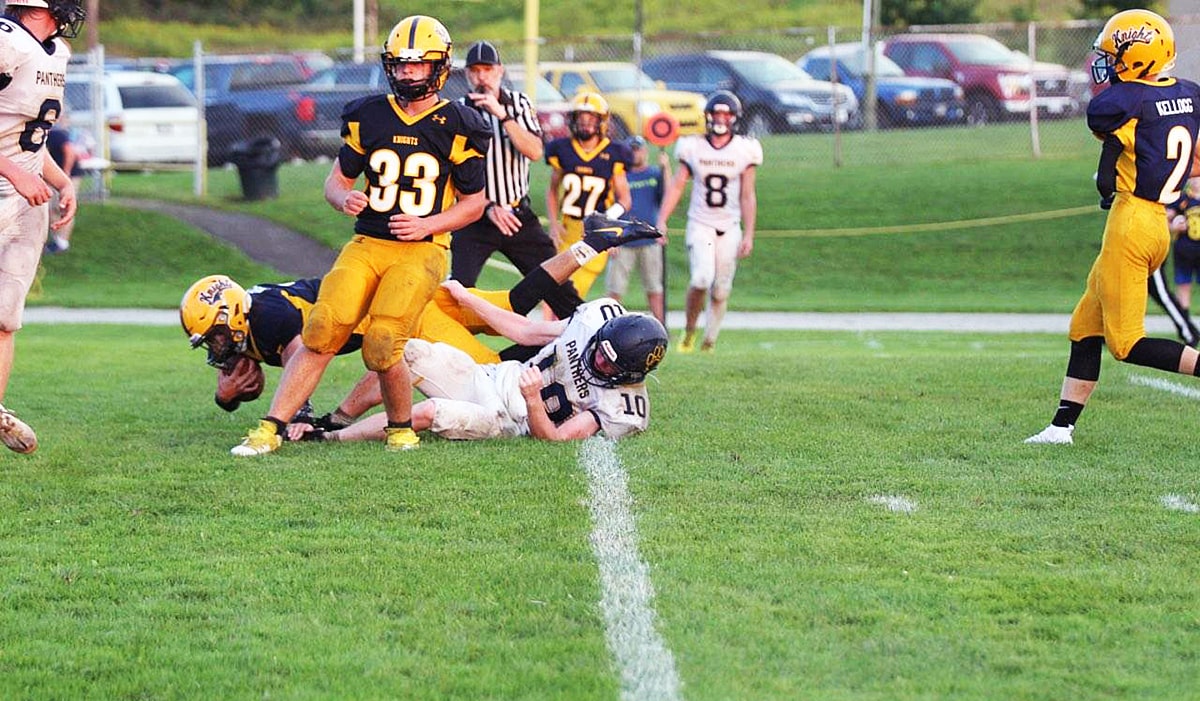 RUSSELL, PA. – Eisenhower scored 29 points in the first quarter en route to a 55-14 win over Franklin.

Keegan Eckstrom got the scoring on a 25-yard touchdown run, which was followed by a Benij Bauer rushing touchdown and a 34-yard strike from Garrett Jensen to Wyatt Lookenhouse. It was Shawn Pascuzzi’s turn next, scoring from seven yards out, and Franklin was called for an intentional grounding in the end zone for a safety.

Jensen and Lookenhouse connected for their second touchdown in the second quarter, and Shawn Pascuzzi scored on a screen pass to make it 42-0. Bauer scored his second rushing touchdown of the game late in the second quarter and Steven Reilly capped the scoring for the Knights with a 2-yard run in the third quarter.

Carson Wilbe had 89 yards rushing and both of Franklin’s touchdowns.

GROVE CITY, Pa. – Grove City’s offense was firing on all cylinders in a 42-20 win over Conneaut (Ohio).

Curtis Hovis ran for 174 yards and a touchdown, Anthony Nemec rushed for 66 yards and two scores and Hunter Homan tossed a pair of touchdown passes, one each to Nemec and Gavin Lutz, the latter of whom led the team in receiving with 83 yards. Hohman had 189 yards through the air.

The Eagles led 28-7 at halftime thanks to a touchdown run from Hovis, a 25-yard scamper from Nemec and a pair of touchdowns from Lutz on a 35-yard fumble recovery and a 29-yard reception from Hohman.

The Cardinals led 35-0 at halftime, putting the mercy rule in effect for the second half.

Martinec had three touchdowns rushing on carries of 5, 24 and 67 yards and also caught a 40-yard touchdown from Noah Cummings. Martinec finished with 247 yards on the ground, while Stephen Martinec and Blake Foulk also had touchdown runs for the Cardinals.

With the win, Cochranton moves to 2-0 on the season.

MEADVILLE, Pa. – With the game tied at 7-7, Butler rattled off three unanswered touchdowns from the second quarter to the fourth quarter en route to a 27-13 win over Meadville.

Cooper Baxter scored on runs of 69, 4 and 10 yards for the Golden Tornado, and also threw a touchdown pass to Braylon Littlejohn that covered 11 yards. Baxter finished with 131 yards rushing and 134 yards passing.

For Meadville Brady Walker scored on an 11-yard run in the first quarter and Khalon Simmons a 74-yarder in the fourth quarter. Simmons finished with 150 yards on the ground and Griffin Buzzell 91 for the Bulldogs.

The Ramblers also returned a pair of kickoffs for touchdowns courtesy of Crawford (75 yards) and Suhtaun Lewis (80 yards). Michael Parks also carried the ball for 117 yards and at touchdown for Prep.

Warren’s touchdown came on a 9-yard toss from Eric Dippold to Justice Green. Dippold threw for 74 yards but was also intercepted three times. Ben White caught a pair of passes for 41 yards for the Dragons.

MERCER, Pa. – Jalen Wagner scored on a pair of rushing touchdowns as Reynolds powered past Mercer, 26-7.

The Raiders led 14-7 at halftime on the strength of a Wagner 9-yard run and a Haydin McLaughlin 22-yard scamper.

The Mustangs got on the board courtesy of an Ethan Wiley 7-yard touchdown pass to Logan Turton.

Reynolds’ defense dominated in the second half and offensively, Wagner punched it in from five yards out and Clyaont Rhoades capped the scoring with a 3-yard run.

Wagner finished with 69 yards on the ground.

HARBORCREEK, Pa. – After a pair of losses to Cathedral Prep to open the season, Erie got in the win column with a 36-20 victory over Harbor Creek.

Harbor Creek led 7-2 at halftime, but the Royals outscored them 38-13 in the second half.

Marquell Darnell caught three touchdowns, two from Adrian Tate and another from Denzel Driver. For the game, Darnell had 100 yards receiving, with all three of his receptions going for touchdowns.

Jermaine Selby also eclipsed 100 yards on the ground and score a touchdown.

For Harbor Creek, Cam Williamson went over the 100-yard mark for the third-straight game to start the season, rushing for 105 yards and a score.

WEST MIDDLESEX, Pa. – Playing at West Middlesex, Sharpsville’s co-op with the Big Reds looked great on this night in a 33-7 win over Greenville.

Zack Tedrow had a monster game for Sharpsville rushing four three touchdowns on 105 yards, while also throwing a touchdown pass to Brandon Flanigan that covered 48 yards.

Gennuso scored on a pair of 1-yard runs, while Frazao hauled in touchdown strikes of 30 and 64 yards from Corbin, who finished with 230 yards through the air, 105 of which went to Frazao.

Girard actually led 7-0 after a Zach Lowe touchdown run in the first quarter, but the lead was short-lived.

Gunnar Bax had 90 yards rushing to pace the Yellow Jackets.

Kyler Shaffer rushed for two touchdowns and totaled 55 yards on the ground and also threw a touchdown pass to Skylar Olmstead that covered 43 yards.

NORTH EAST, Pa. – Tyler Wittman had three rushing touchdowns as North East scored six times on the ground en route to a 47-14 win over Corry for its first win of the season.

Casey Burch also had 100 yards on the ground and a score for the ‘Pickers, while Jackson Humes had a pair of short touchdown runs as well.

District 9 and District 10 Football Live Scoreboard – Week 3 2021 (Sept. 9-11)
Wingard Helps Keystone Beat Brockway and Move to 3-0
This website or its third-party tools process personal data.In case of sale of your personal information, you may opt out by using the link Do not sell my personal information.
×
Manage consent