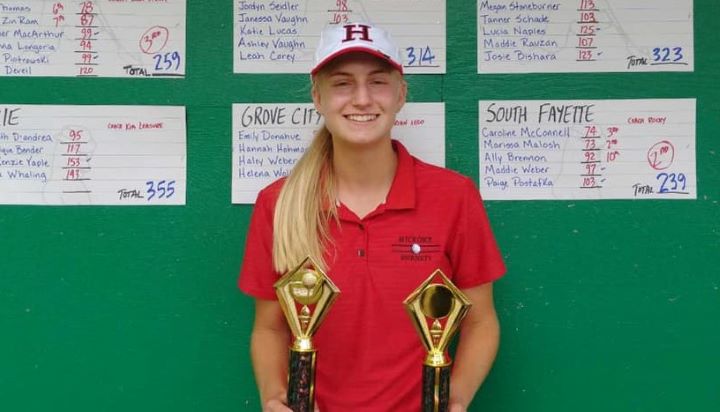 Gustus’ 66 broke a record that had stood since the 1960s at Tam O’Shanter, according to a tweet from Bob Greenberg, who said Tam O’Shanter owner John Kerins said the previous women’s course record was 68 shot by Maureen Riley in the 1960s.

Behind Gustus, Hickory beat second-place South Fayette 219-239. South Fayette’s Marissa Malosh was second with a 73 while teammate Caroline McConnell was third with a 74. Hickory’s Sasha Petrochko finished fourth with a 75 and Hickory’s Leah Benson was fifth with a 78.

Sophia Seduski also had a strong match for the Lady Beavers firing a 48.

Rowane was low scorer on the day shooting a 74 with Taylor right behind him with a 75. That helped the Ramblers easily outpace second-place Warren, 310-336. The Dragons were a shot in front of third-place McDowell (337).

Teagan Gray was the top golfer for Warren taking third shooting a 77, while Owen Blum shot an 81.

Nate James also shot an 83 for the Beavers, who shot a 335 as a team easily winning, while Tyler Hasbrouck fired an 86. Second-place Titusville shot a 380 led by a 93 from Tyler Durstine.

HUBBARD, Ohio – Sam Norris and Toby Matson each shot a 74 to lead Grove City to its Region 2 Mega Match win of the year.

The Eagles shot 317 as a team to beat out second-place Hickory, which shot a 332 behind a 78 from Cameron Colbert. Grove City and Hickory are tied for first place in the Region after four matches.

Slippery Rock’s Jacob Wolak was the low man on the day shooting a 73.

The Mustangs shot a 358 as a team and moved into a first-place tie with Lakeview in region play when the Sailors finished third, a stroke back of second-place Greenville (372-373).

Nate Stuyvesant was the top golfer for Greenville shooting an 89, while Anthony Grim led Lakeview with an 86.

Siegel fired a 36 one shot back of Moniteau’s Jacob Felsing, who won the match with a 35. Jackson Fox and Devon Lauer of Clarion and Hayden Callen of C-L tied for third with all three golfers shooting a 40.

Sept. 10, 2020 Golf Scores Powered by Hunter Station
Full Slate of Games Highlight Week 1 in District 10
We use cookies on our website to give you the most relevant experience by remembering your preferences and repeat visits. By clicking “Accept All”, you consent to the use of ALL the cookies. However, you may visit "Cookie Settings" to provide a controlled consent.
Cookie SettingsAccept All
Manage consent