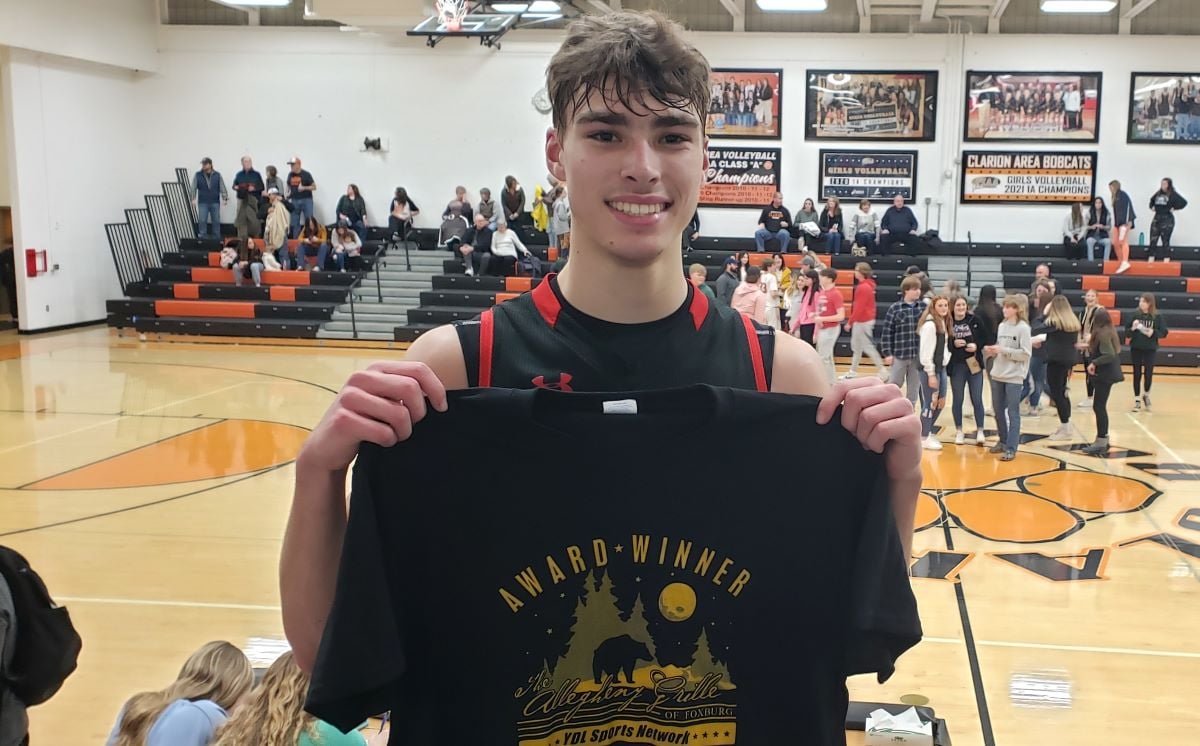 Mason Clouse had 15 points in Redbank Valley's win over Clarion Thursday and was named the Allegheny Grille of Foxburg Player of the Game. Photo by Chris Rossetti

It was the sixth consecutive win for the Bulldogs, who climbed back to .500 (8-8) with the victory after starting the season, 2-8/

Redbank Valley trailed 22-17 at halftime and was down 24-17 early in the third quarter before going on a 13-1 run that was punctuated with a Mason Clouse basket a ½ minute into the fourth quarter.

Clarion got back within one, 30-29, on a Devon Lauer 3-pointer, but Kieran Fricko hit back-to-back triples for Redbank Valley to push the lead to 36-31 with just over 4 ½ minutes left.

Clarion was able to get it back within four, 42-38, on a 3-pointer by Dawson Smail with just over a minute to play, but Ortz responded with a layup on the other end to set the final score.

Mason Clouse had a strong game for Redbank Valley with 15 points and was named the Allegheny Grille of Foxburg Player of the Game.

Mason Clouse talked about the victory

Owen Clouse and Fricko each chipped in eight points with Ortz adding seven.

Bryce Brinkley had 12 points for Clarion with Lauer adding 11, but only three after halftime. Dawson Smail chipped in seven.

DUKE CENTER, Pa. – Landon Francis led four Otto-Eldred players in double figures with 18 points as the Terrors picked up their second win of the season over Port Allegany, 63-35.

Francis was named Allegheny Grille of Foxburg Player of the Game and talked about the win.

Splain finished with 15 points, while Cousins had 12 and Shene Thomas 11 (9 in the second half).

SMETHPORT, Pa. – A 22-11 second-quarter advantage helped Smethport rebound from a two-game losing streak with a 54-38 home NTL win over Coudersport.

The teams were tied at eight at the end of eight minutes before Preston Alfieri scored 1 of his game-high tying 18 points in the second quarter to give the Hubbers a 30-19 halftime lead.

Hayden Leet then took over in the third quarter scoring 12 of his 18 points in the frame to help grow the advantage to 12, 46-31.

Dawson Hooftallen, meanwhile had a big double-double with 16 points and 15 rebounds while tacking on a pair of steals.

FOXBURG, Pa. – Cole Henry and Kyle Nellis combined to score 41 points to help Keystone to its sixth straight win with a 71-50 victory at A-C Valley.

Henry scored 21 points with Nellis adding 20 for the Panthers, who have won 7 of 8 since starting the season 0-5.

FRILLS CORNERS, Pa. – Andrew Zepeda had 19 points and five assists to help visiting Moniteau to a 64-47 win over North Clarion.

Micah Rupp added a double-double for the Gremlins with 12 points, 10 rebounds, four blocks, and two assists while Jacob Callihan also had 14 points to go with five rebounds, three blocks, two assists, and a steal.

Payton Johnston and Zander Laughlin each scored nine points for Union, which shot 25 percent (12 of 48) from the field.

GALETON, Pa. – Braiden Cimino had 14 points to help Galeton to a 67-53 home win over Oswayo Valley.

Braden Ward, John Martin, and Corey Anderson each added 10 points for the Tigers.

Jenna Kasmierski had a game-high 17 points for Ridgway.

The Tigers also got 14 points from Alison Hatajik.