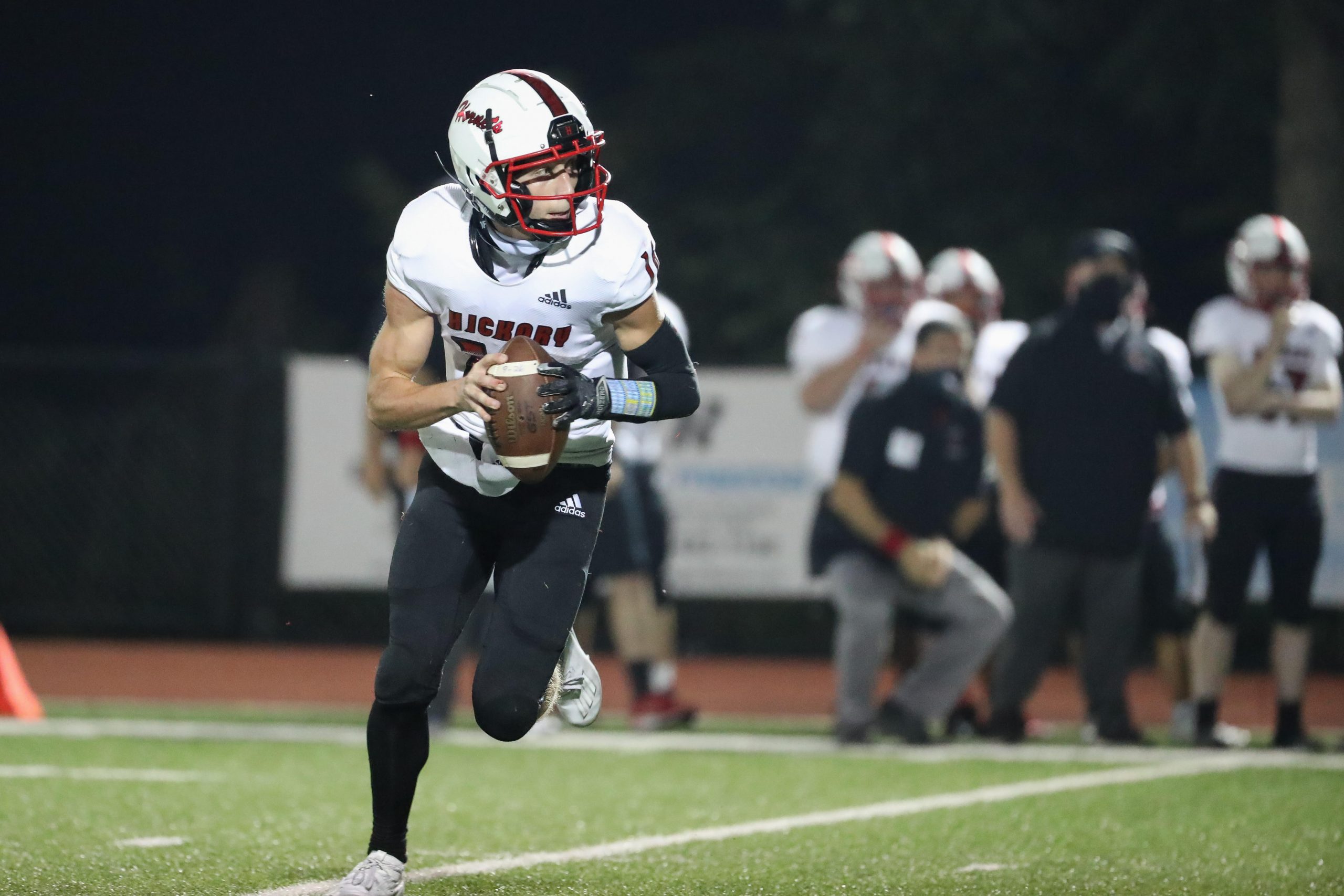 WATTSBURG, Pa. – Cael Black rushed for three touchdowns, Owen Trumbull threw for three and Eisenhower rolled to a 50-6 win over Seneca to improve to 6-0.

Black scored all three of his touchdowns in the first half on runs of 46, 14 and 39 yards, finishing with 151 yards on the ground.

Trumbull connected with Caleb Robinault on a 41-yard strike to open the scoring, and also tossed scores of 24 yards to Dillon Benson and 6 to Zane Alexander.

Benji Bauer added a third-quarter rushing touchdown for the Knights, while Seneca’s Ryan Miller broke the shutout with an 86-yard touchdown run in the fourth quarter.

Trumbull was a perfect 5-of-5 through the air for 108 yards, while Benson had a pair of receptions for 63 yards. Trumbull also had 66 yards rushing.

Henwood threw for 275 yards and two scores and rushed for 123 yards and a touchdown as the Hornets beat the Rockets for the second time this season.

After a scoreless first quarter, Hickory scored 21-straight points in the second to take control.

Henwood’s 41-yard touchdown run got the Hornets on the board at the 9:25 mark of the second stanza.

The Hickory defense got in on the scoring act, as Rocco Iacino pounced on a fumble and returned it 8 yards for a score with just 2:42 to go before the half.

The back-breaking came when Hickory got the ball back and Henwood completed a 41-yard Hail Mary touchdown to Jackson Pryts as time expired in the half.

Slippery Rock (2-4) got on the board in the third quarter. Quarterback William Mokel completed a 23-yard touchdown pass to John Sabo to make it 21-7.

Henwood put the finishing touches on the Hickory victory in the fourth quarter, hooking up with Ramarion Whitehead on an 18-yard touchdown pass.

Whitehead finished with 10 receptions for 141 yards.

Mokel threw for 80 yards and Shane Thompson had 48 on the ground for the Rockets.

This game was much closer than the first time around, however, which was a 75-14 win for the Raiders.

After a big kickoff return, Toy scored on the Raiders’ first play from scrimmage, a 16-yard scamper, but Kennedy Catholic’s Matt Jordan broke free on a 66-yard rushing score to give the Eagles’ life.

The Eagles connected on another big play in the second quarter, as Nick Ondo hit Sky’Ler Thomas on a 80-yard touchdown pass to get KC within 1, 13-12.

That score held until the third quarter, when Toy broke free on his third touchdown of the game.

Toy’s fourth touchdown with 5:52 left in the game put the game out of reach at 34-18 after Ondo scored on a rushing touchdown to get KC within 27-18.

ERIE, Pa. – Fairview stopped Mercyhurst Prep on a 2-point conversion with just over two minutes to go in regulation to preserve a 21-20 win over Mercyhurst Prep.

After Gus Campbell’s 20-yard touchdown run got the Lakers (1-5) within a point, the Fairview defense stood tall.

Fairview (3-3) led 13-7 at the half on a pair of Tyler Corbin touchdown passes to Jared Gennuso and Jeremy Frazao.

Mercyhurst Prep scored on a Campbell 8-yard run in the third quarter to take a 14-13 lead after the extra point.

Fairview responded, however, as Frazao scored on a 5-yard run in the fourth quarter and caught Corbin’s 2-point conversion pass for a 21-14 lead.

Gennuso finished with 114 yards on the ground for the Tigers, while Campbell had 65 for the Lakers.