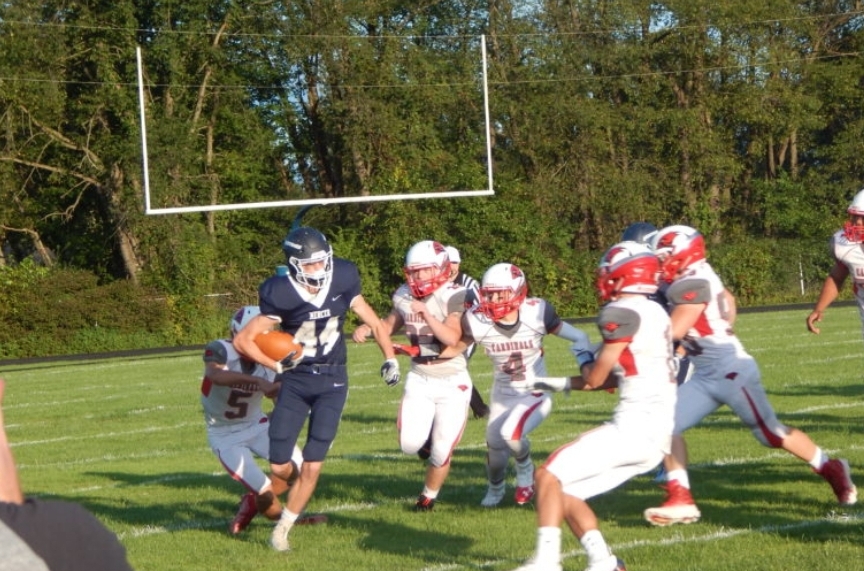 HERMITAGE, Pa. – Aidan Bright rushed for 229 yards and scored all four Mercer touchdown in a 26-0 win over Kennedy Catholic on Saturday.

It was the Mustangs second win over KC this season.

Bright scored on a 3-yard run in the first half and runs of 47 and 51 in the second half. He also scooped up a fumble and ran 25 yards for a score.

Matt Jordan had 109 yards on the ground for Kennedy Catholic

ERIE, Pa. – The duo of Todd Essman and Gunner Bax powered Girard past Mercyhurst Prep for the second time this season, 35-19.

Essman rushed for 133 yards and a score and Bax for 111 yards and two touchdowns.

Austin Barrett was 3-of-3 passing for 56 yards, including a 13-yard scoring strike to Essman in the fourth quarter.

Campbell led the Lakers with 185 yards and a touchdown.

Cochranton got on the board first, when Wyatt Barzak connected with Kendrick Hostetler for a 75-yard strike to make it 6-0.

Ben Gilberto scored on a 45-yard run for Maplewood in the third quarter to pad the lead.

Donor finished with 58 yards on the ground and Dominick Kinnedy threw for 91 for the Tigers.

Barzak had 104 yards through the air for Cochranton and Jon Gallo had 56 yards on the ground.

Leading 28-22 in the third quarter, the Braves rattled off 28 unanswered points in the second half, thanks to touchdown runs of 7 and 3 yards from Hoopsick, as well as touchdown rushes from Dante Carr and Antonio Rodriguez.

Rodriguez scored twice in the game.

Ryan Miller scored a pair of rushing touchdowns for Seneca.

EDINBORO, Pa. – Leading 10-6 at halftime, General McLane rattled off 21 unanswered points in the second half to beat North East, 31-15.

Jared Iavrone-Campbell scored on a 59-yard touchdown run in the third quarter, followed shortly after by a Matt Leehan to Luke Salamonsen 35-yard scoring connection.

Iavrone-Campbell converted his second TD run of the third quarter to make it 31-6.

Guest Commentary: Still Finding a Way for Sheffield Football
PA Football News’ Conversation with Coach – Larry Wiser, Central Clarion County
We use cookies on our website to give you the most relevant experience by remembering your preferences and repeat visits. By clicking “Accept All”, you consent to the use of ALL the cookies. However, you may visit "Cookie Settings" to provide a controlled consent.
Cookie SettingsAccept All
Manage consent