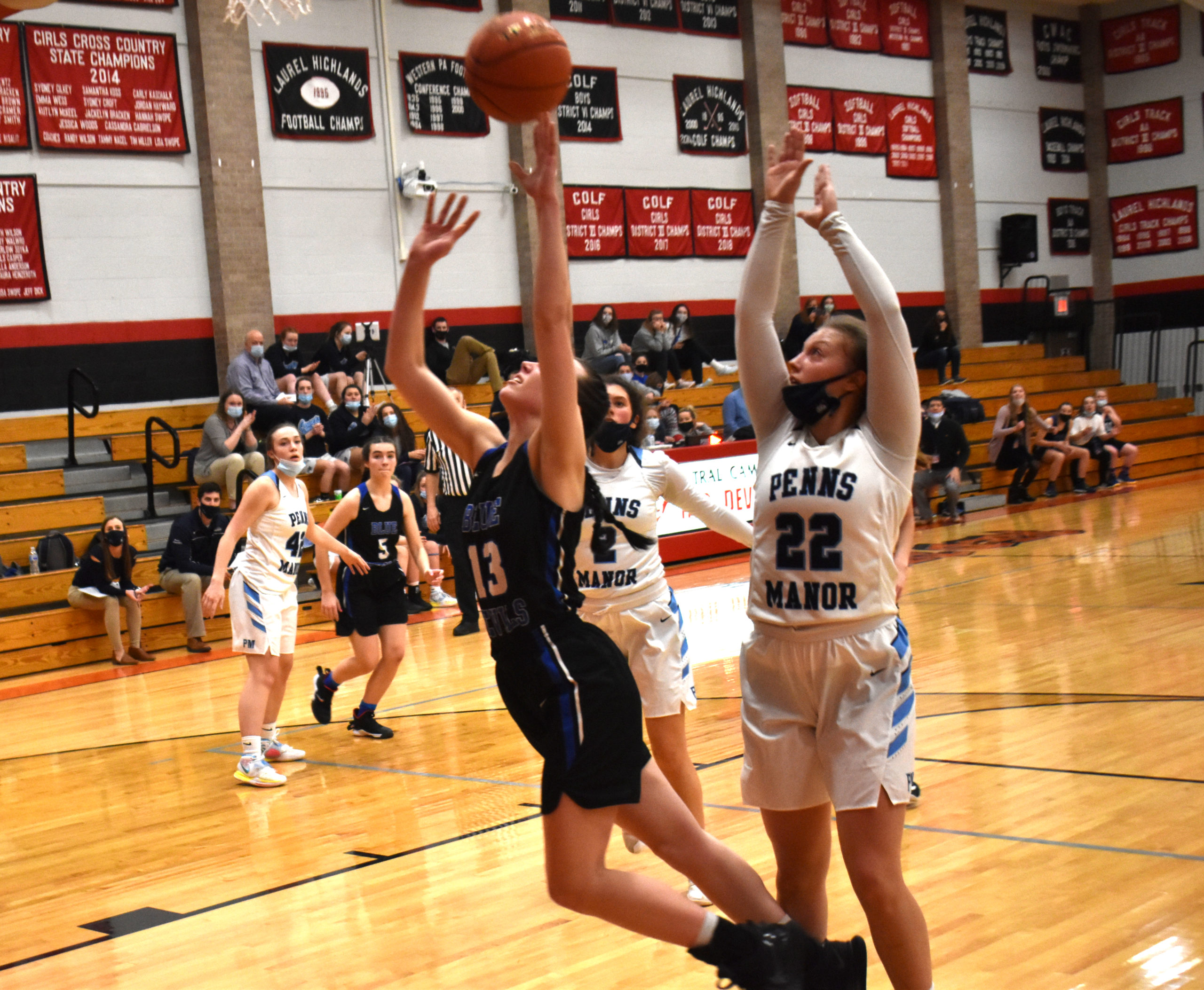 SAEGERTOWN, Pa. – Maggie Triola scored eight of her team-high 15 points in the fourth quarter to help lift Saegertown to a 48-45 win over Grove City.

Hailee Gregor scored six of her 12 points in the fourth quarter for Saegertown, while Lindsey Greco also had 12 points and Lyndzee Amory nine.

Piper Como scored 11 of her 21 points in the fourth quarter and overtime for Grove City, while Delaney Callahan had 13 points and Izzy Gamble nine.

SHARPSVILLE, Pa. – Malana Beach hit the game-winning shot with under five seconds to go in double overtime to lift Hickory to a 42-40 win over Sharpsville.

Hickory outscored Sharpsville by three in the fourth quarter, 16-13, to force overtime.

Kaelyn Fustos had 14 points for Hickory, while Mariah Swanson added 10 and Beach nine.

Warren built a 34-11 halftime lead en route to the win.

The Blue Devils outscored the Bears 30-11 in the second half.

Yanc also had five steals and four assists, while Wheeler and Rauscher had seven rebounds each.

RUSSELL, Pa. – Eisenhower held Titusville to single digits in three of the four quarters while scoring in double figures itself as the Knights topped the Rockets, 51-20, for their fourth straight win.

Mackenzie Dunn set the tone early with her quick hands defensively and offensive rebounds leading to seven points in the frame.

Steinberg took control of the offense in the second quarter as she scored 11 of her game-high 20 points in the second.

It was Lainey Font’s turn in the fourth quarter as she scored seven points.

Font finished with 13 points and Dunn had 10 points.

CJ Sabo and Julia Coffaro had eight points each for Slippery Rock.

The Eagles outscored the Orioles 16-3 in the second quarter on their way to the win.

Draya Neavins scored nine of her 15 points in the first-quarter surge for Erie.

Aubrey Neavins and Lex Cruz scored 10 points each for Erie.

Libby Opp had a big game for General McLane with 23 points, 16 of which came in the first half. Bailey Cannon added eight points for GM.

Jamie Blum scored 13 of her 16 points in the second half for Franklin, while Jenn Blum had 13 points and Katie Boal eight.

Carly Perrye scored 14 of her 18 points in the fourth quarter for Conneaut and also pulled down seven rebounds.

Hannah Brady had a game-high 20 points for CASH, while Kaitlynn Crabb had five rebounds and three steals, and Eliza Harrington had seven rebounds and two steals.

COCHRANTON, Pa. – Madison Eimer led a balanced Maplewood effort with 13 points in a 58-26 win over Cochranton.

Maplewood built an 18-4 lead after the first quarter en route to the win.

The Ramblers built a 25-2 lead after the first quarter en route to the win.

Jayden McBride had 15 points for Prep, while Tori Mayes and Addie Biel added 11 points each.

Emma Marsteller and Kelsey Seddon added 10 points each for Lakeview.

TRANSFER, Pa. – LeaMiller had eight points to lead Reynolds to a 26-18 win over Commodore Perry.

WATTSBURG, Pa. – Meghan Konkol had 12 points as Seneca earned a 36-30 win over Northwestern.

McKayla Presser-Palmer had 12 points for Northwestern.

MEADVILLE, Pa. – Marlaya McCoy had 10 points as Meadville earned a 37-33 win over Corry.

Pressley Washil had 10 points for Mercer.