Rushing into Semifinals: Smethport has 3 100-yard Rushers in D9 1A Quarterfinal Win over Curwensville 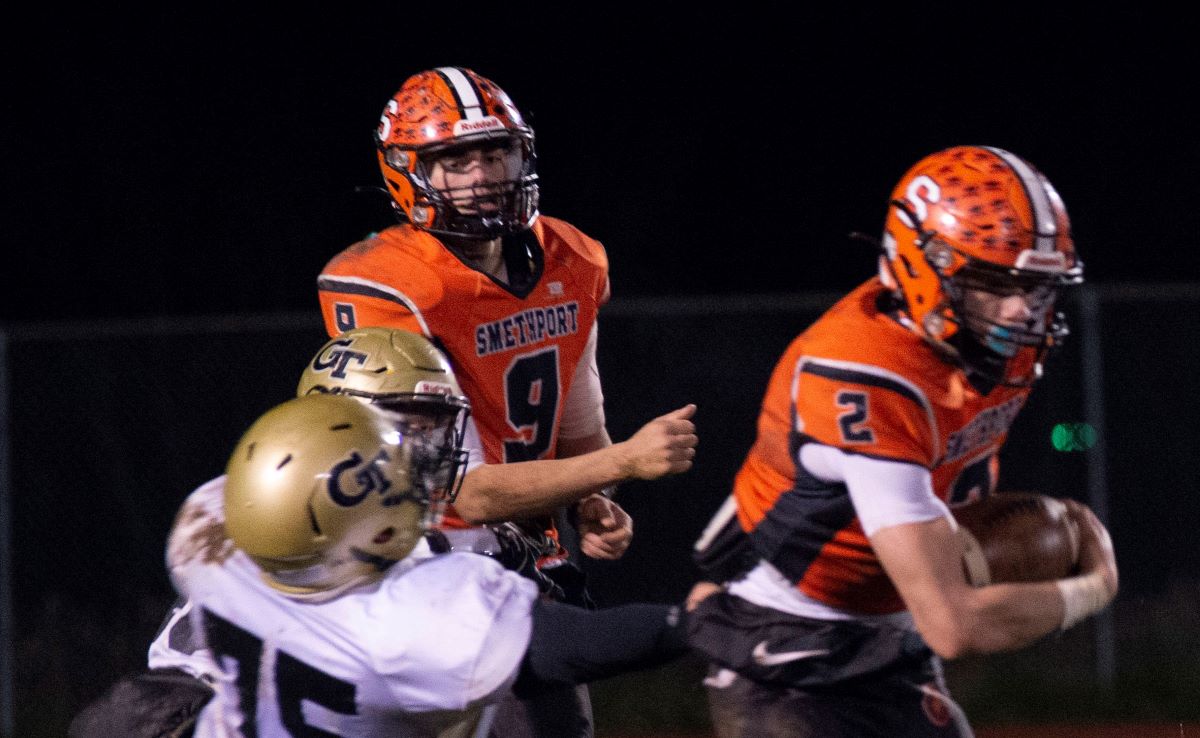 Smethport's Ryan Mason bursts through a gap during the Hubbers' playoff win Friday night. Mason was one of three Smethport players over 100 yards with 123 and 2 TDs. Photo by Barb Davis. See more of Davis' work here

SMETHPORT, Pa. – The Smethport/Curwensville District 9 Class 1A quarterfinal football game turned out to be a contrast in styles with the Hubbers’ ground-and-pound game being too much for the Golden Tide’s high-flying attack in a 46-27 win at Smethport.

Smethport put three runners over 100 yards each while rushing 56 times for 433 yards in the victory.

“Curwensville is young up front, and we were a little better up front,” Smethport head coach Adam Jack said. “And with Noah coming back (from an injury that forced him to miss the Coudersport game two weeks agl), the kids had a little extra confidence. They did a good job of execution up front, and Coach (Joel) Lent and (Ryan) Yingling did a great job with their game plan this week.”

Lent and Mason each scored two touchdowns and Pelchy one, as Smethport made a commitment to possess the ball as much as they could to keep an explosive Curwensville offense off the field.

That strategy worked to perfection with Smethport holding onto the ball for 35:11 to Curwensville’s 12:49.

“Part of the discussion at halftime was to use every second of the clock with the run game,” Jack said. “I thought they were having trouble with our run game, and we could run on them all night. We had trouble stopping their pass game and wanted to keep the ball out of their hands as much as possible.”

Jack was correct in both cases.

Lent credited the offensive line for the lengthy drives.

“They are studs,” Lent said. “They really executed tonight. They dug deep and got the job done. Give it all to them.”

The long drives were important considering Curwensville showed a quick-strike ability that had the Golden Tide score all four of their touchdowns in less than two minutes with scoring “drives” of 2:32, 1:09, 13 seconds, and 44 seconds.

Dan McGarry was 16 of 26 passing for 346 yards, three touchdowns, and an interception with Ty Terry having a monster game receiving with six catches for 209 yards and two scores.

McGarry also added a rushing touchdown, and Thad Butler chipped in with four catches for 82 yards and a touchdown and ran six times for 67 yards.

Despite Butler averaging 11.2 yards per carry on his six totes, Curwensville never really committed to running the ball and finished the game with just 15 rushes with four of those being sacks.

The turning point in the game came on Smethport’s final drive of the first half and its first drive of the second half.

It seemed like Smethport was content to just run out the clock knowing it was going to get the ball back to start the second half, as the first four plays were runs that yielded 11 yards.

But on second-and-9 from the Smethport 26, Lent found Alex Ognen over the middle for a 29-yard gain to the Curwensville 45-yard line changing the team’s thinking.

“That was Coach Lent,” Jack said. “He recognized they didn’t have a safety in the middle of the field. They brought their safety up into the box to stop Noah. He said, let’s take a shot and see what happens. Then once that happened (the pass to Ognen) we said let’s try to score before halftime.”

Score they did, as Lent hit Ognen again, this time from 40 yards away, to put Smethport ahead at the break, 24-20.

The Hubbers then got the ball to start the second half and proceed to go 65 yards in six plays taking 3:25 off the clock with Mason scoring on a 2-yard run to make it 30-20.

Curwensville got back within three, 30-27, on a 44-yard McGary to Terry touchdown pass late in the third quarter, but again Smethport had the answer.

Curwensville’s offense stalled going three-and-out on its next possession, and with just eight minutes to play the Golden Tide decided to punt from its own 40 despite having had trouble stopping the Smethport run game.

That backfired when the Hubbers marched 75 yards in nine plays putting the game away on a Lent 5-yard run with 2:30 left in the game.

For a moment. midway through the second quarter, it didn’t look like Lent nor the Hubbers would have a chance to put the game away.

On a 56-yard touchdown pass to Butler that saw Butler race down the far sideline for the score, Lent was hurt with his shoulder popping out.

The senior quarter was on the ground for about four minutes being tended to by the Smethport athletic trainer before sprinting off under his own power. He did miss the ensuing Hubbers’ possession, but returned on the punt and then played the rest of the game.

“When I looked across the field and saw the undershirt, Noah always wears an undershirt, I knew it was him,” Jack said. “I thought, oh boy, here we go. But once they (helped him) and he said ‘let’s go’ I knew we were still in this.”

“It was nailbiter in the first half,” Lent, who was also 4 of 4 passing for 108 yards and two touchdowns, said. “But we dug down, fought through it, got through it, and here we are with a win.”

Smethport (8-2) will travel to Union High School to face Union/A-C Valley at 7 p.m. Friday, Nov. 12, in the semifinals. Curwensville’s season ends at 6-5 (the Tide were 6-4 on the field but were forced to forfeit a game due to COVID-19 protocols).

Wagner Scores 6 TDs to Lead Reynolds Back to D10 Class 1A Title Game
Billotte, Kline Lead Clearfield to D9 3A Title; Win No. 299 for Clearfield’s Janocko
This website or its third-party tools process personal data.In case of sale of your personal information, you may opt out by using the link Do not sell my personal information.
×
Manage consent