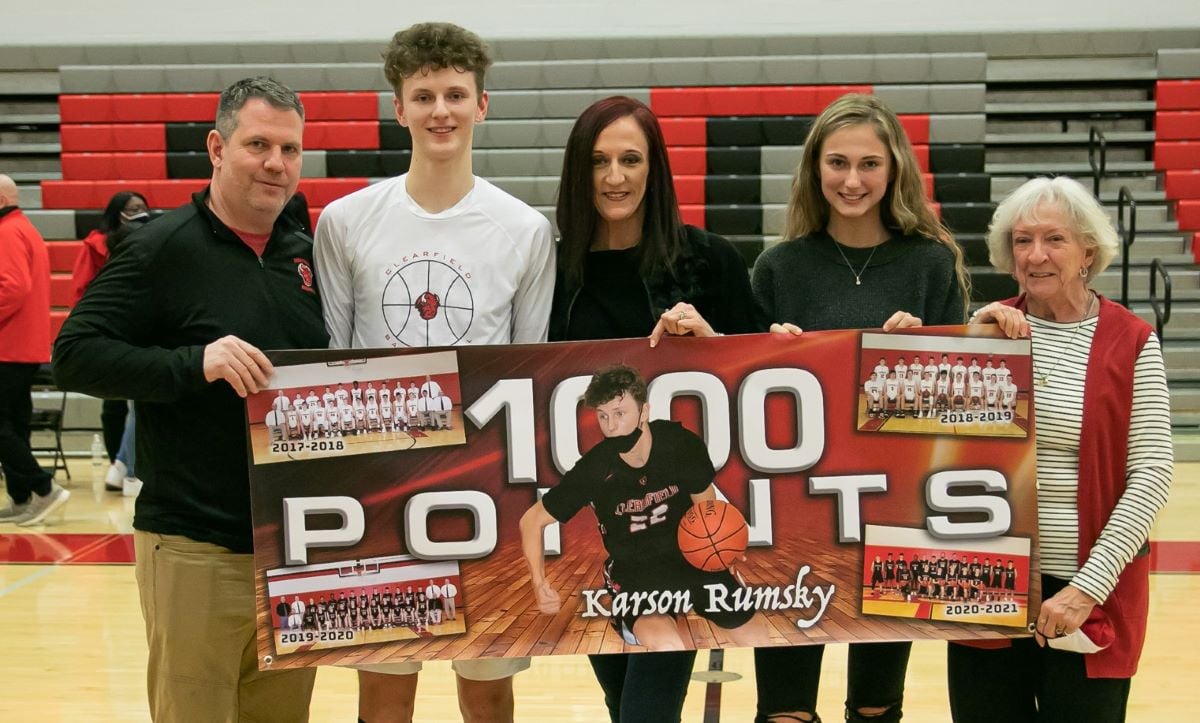 HYDE, Pa. – Needing 28 points to reach the 1,000-point milestone, Clearfield’s Karson Rumsky did just that and helped the Bison to a 63-26 victory over Punxsutawney.

“It means a lot,” Rumsky, the 11th player in Clearfield boys’ basketball history to reach 1,000 points, said. “I want to thank my teammates and coaches for pushing me and getting me the ball.”

The milestone came on a free throw with 4:33 left in the third quarter and Clearfield ahead 38-20.

With 27 points on the night, Rumsky took a foul-line jumper and was fouled sending him to the line to shoot two. He hit the first free throw to reach 1,000 career points.

Watch the sequence leading to Rumsky’s 1,000th point via Clearfield’s YouTube stream of the game

“I thought that last jumper was going to fall,” Rumsky said of his 1000th point being a free-throw. “(I was) definitely a little nervous, but I just shot it higher than the backboard like coach always says and I made it.”

Despite 17 first-half points from Rumsky, Clearfield struggled before halftime and led by just eight, 28-20, after trailing 16-12 after the first eight minutes.

Ethan Presloud was hot early for the Chucks scoring all six of his points in the first quarter to help Punxsutawney to the early lead.

But Clearfield ramped up the defense after allowing the 16 first-quarter points giving up just 10 the rest of the way.

Cole Miller hit three 3-pointers on his way to 11 points for the Bison. Miller chipped in six rebounds and five steals. Matt Pallo and Ryan Gearhart each contributed six tallies in the win.

Ethan Presloid paced Punxsutawmey with six points in the loss.

Clearfield is now 12-5 on the year with Punxsutawney dropping to 1-7.

The Bison are back in action Monday at Curwensville, while the Chucks return to the hardwood Friday when they host DuBois.

Feb. 11, 2021 D9 Boys’ Hoops: Brown Paces NoPo Win; St. Marys Edges Ridgway; Karns City Races Past Clarion
District 9 and District 10 Basketball and Wrestling Schedule for Feb. 13, 2021
This website or its third-party tools process personal data.In case of sale of your personal information, you may opt out by using the link Do not sell my personal information.
×
Manage consent