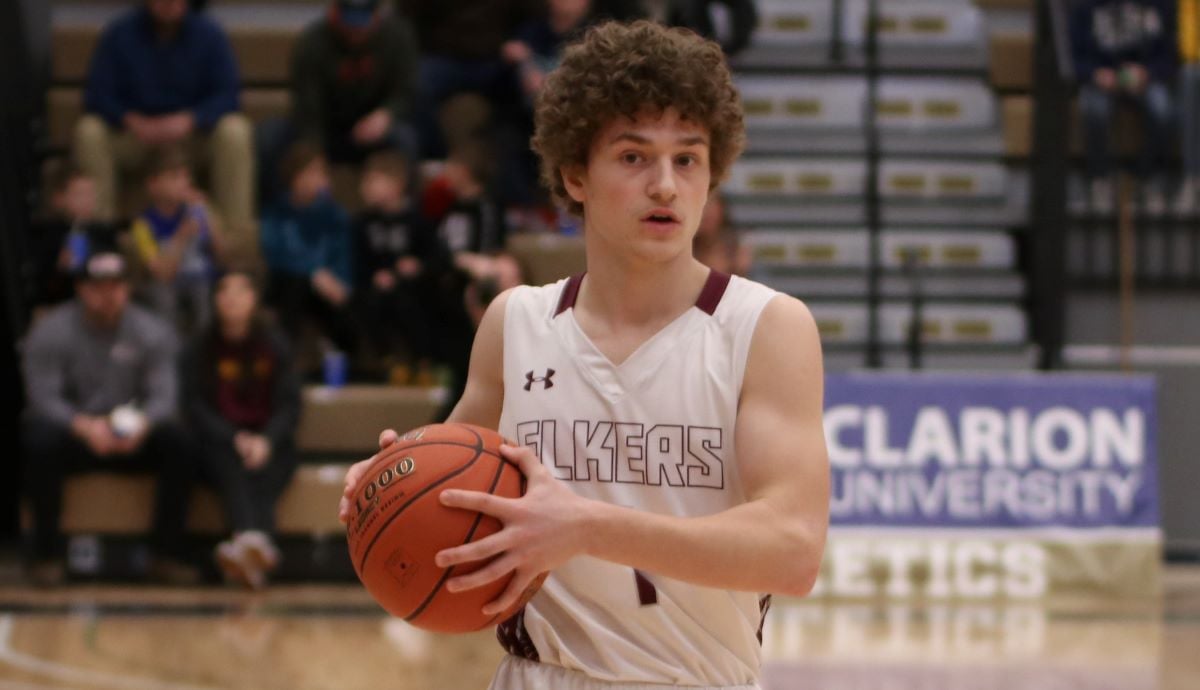 BROOKVILLE, Pa. – Returning to the District 9 Class 2A final after a one-year hiatus, Ridgway posted a 10-point lead by halftime then held off a Karns City surge early in the fourth quarter for a 45-37 semifinal win over the defending champion Gremlins at Brookville Area High School.

Ridgway (19-5) knocked the team out that beat it in last year’s semifinals and will face Redbank Valley for the title Friday night at Clarion University’s Tippin Gymnasium at 7:30 p.m. It’ll either beat the Elkers for the third time in four years or the Bulldogs for the first time since 2015.

Ridgway led almost wire to wire, including 17-7 at halftime after holding the Gremlins scoreless in the second quarter. The Elkers’ lead was still 10 at 24-14 midway through the third quarter before the Gremlins got it within 28-26 by the 6:24 mark of the fourth.

But the Elkers leaned on a strong second-half shooting effort from Aaron Sorg, who made all four of his shots in the fourth and scored 10 points in the final eight minutes and 13 of his team-high 16 points in the second half.

An 11-3 run by Ridgway pushed it back to 10 points at 39-29 with 2:48 remaining. Sorg and Dom Allegretto accounted for all 11 of those points. Allegretto finished with 15 points while Dan Park added 10 points and 10 rebounds. The Elkers shot 51 percent from the floor.

Micah Rupp finished with 16 points on 7-for-10 shooting and seven rebounds for the Gremlins (18-7), who will play Keystone for third place at a state playoff berth at a site and time to be announced.

DUBOIS, Pa. – Using an 11-0 run in the fourth quarter, Redbank Valley held off a pesky upset-minded Keystone squad to move into the District 9 Class 2A title game for the first time since winning the championship in 2015 with a 42-32 semifinal win at DuBois High School.

Instead of panicking, Redbank Valley showed the mettle of a champion going on the game-deciding 11-0 spurt that started with a pair of Chris Marshall free throws with about 5:20 left and ended on an Owen Clouse basket with just over a minute to play.

Bret Wingard had a double-double for Keystone with 16 points and 10 rebounds. Zander McHenry and Albright each added six points.

Keystone will take on Karns City in the third-place game with the winner moving into the PIAA Tournament. The site, time, and date of that game have not been announced.

Johnson, VanWormer Lead Oil City into D10 Class 4A Title Game; Fairview Also Advances; KC, Rocky Grove to Play in 2A Final
Fulmer Becomes Franklin’s All-Time Leading Scorer as Knights Advance to D10 3A Title Game; Will Meet Seneca
We use cookies on our website to give you the most relevant experience by remembering your preferences and repeat visits. By clicking “Accept All”, you consent to the use of ALL the cookies. However, you may visit "Cookie Settings" to provide a controlled consent.
Cookie SettingsAccept All
Manage consent