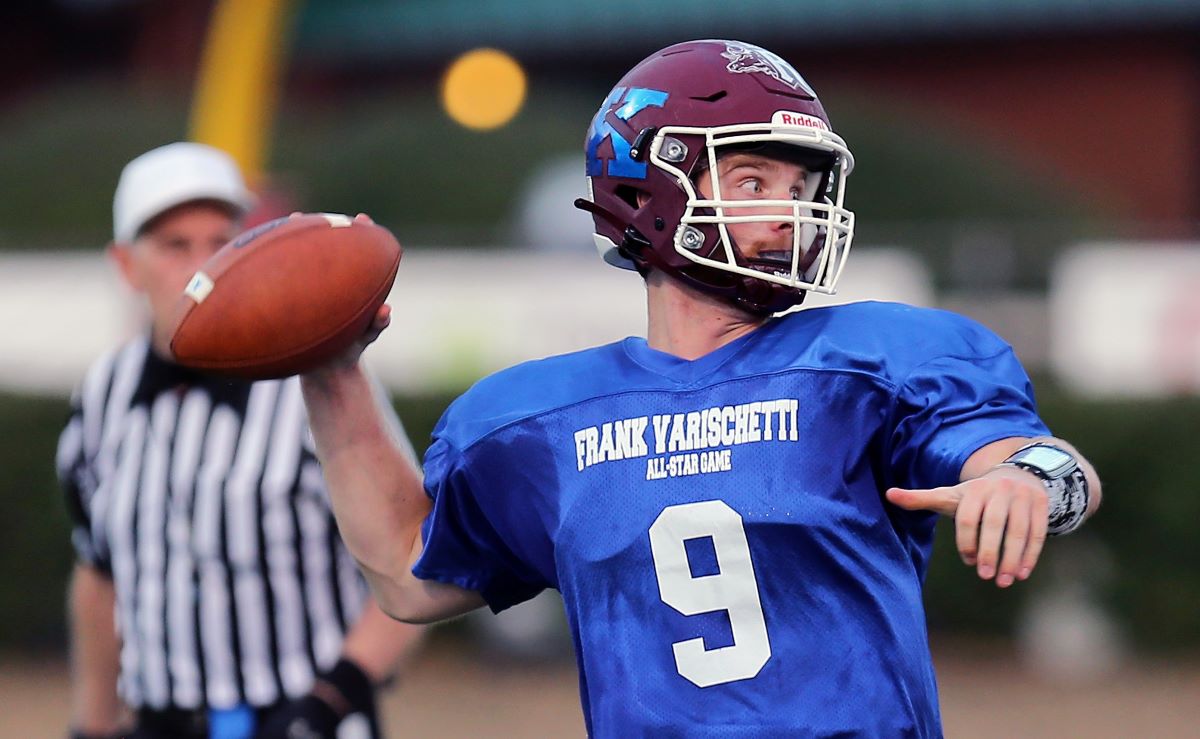 Paul Gresco of Brockway threw a pair of touchdown pass in the AML's win. Photo by Paul Burdick.

BROCKWAY, Pa. – Ridgway has dominated District 9 for four years, so it shouldn’t be a surprise that a trio of Elkers helped the former AML to a 24-6 win over the former KSAC in the fifth annual Frank Varischetti All-Star football game at the newly renovated Varischetti Field in Brockway.

Watch the First Half via The Hound Facebook Page

Watch the Second Half via The Hound Facebook Page

Paul Gresco, who led Ridgway to the past two D9 Class 2A titles, hooked up with a pair of teammates – Austin Green and Matt Dush – for a pair of second-quarter touchdown passes to help the AML to a 17-6 halftime lead.

Gresco finished the game 7 of 17 for 101 yards and the two scores, while Green caught three passes for 76 yards including a 34-yard scoring pass at the 9:21 mark of the second quarter that gave the AML the lead for good, 10-6. All three of Green’s grabs, including a pair of acrobatic catches, game on the scoring drive which covered 78 yards.

Then, late in the second quarter, Grecso connected with Dush from 12 yards out one play after the two had apparently hooked up on an 11-yard scoring pass that was called back because of a penalty. That touchdown pass pushed the lead to 17-6 at the break and was set up after a 6-yard punt by the KSAC gave the AML the ball at the KSAC’s 21-yard line. Dush had three catches for 18 yards in the game.

While it was the Ridgway connection that helped the AML to the lead, it was an Elk County Catholic star that made sure the AML kept the advantage.

On the first play of the fourth quarter, John Wittman intercepted a pass from Keystone’s Isaak Jones in the AML end zone and returned it out to the 1-yard line thwarting the KSAC attempt to make it a one-possession game.

Just under six minutes later, Wittman sealed the victory by galloping 50 yards down the far sideline for a touchdown.

The AML started the scoring on a 39-yard Aaron Hottel of Kane field goal with 4:20 left in the first quarter that would have been good from 45 yards.

The KSAC answered with a seven-play, 75-yard drive that saw a pair of Karns City graduates give the old league its only lead of the game, 6-3.

The touchdown came on a 19-yard pass from Anthony Kamenski to Hunter Rowe with 42 seconds left in the quarter.

A hundred of those rushing yards for the AML came from Brockway’s Jon Wood, who gained an even 100 on seven carries including the night’s highlight run when he literally threw aside Colton Zacherl of Clarion to avoid a tackle.

The victory pushed the AML’s record in the All-Star game to 4-1 with the KSAC’s lone win coming a year ago. The game was originally scheduled for late June but was postponed until Friday night because of COVID-19. No fans were allowed inside the stadium but a gathering of fans – mainly relatives of the players – formed outside the stadium.

Watch the Varischetti All-Star Game Live via The Hound
PA Issues New Recommendations to How Schools Should Open
This website or its third-party tools process personal data.In case of sale of your personal information, you may opt out by using the link Do not sell my personal information.
×
Manage consent