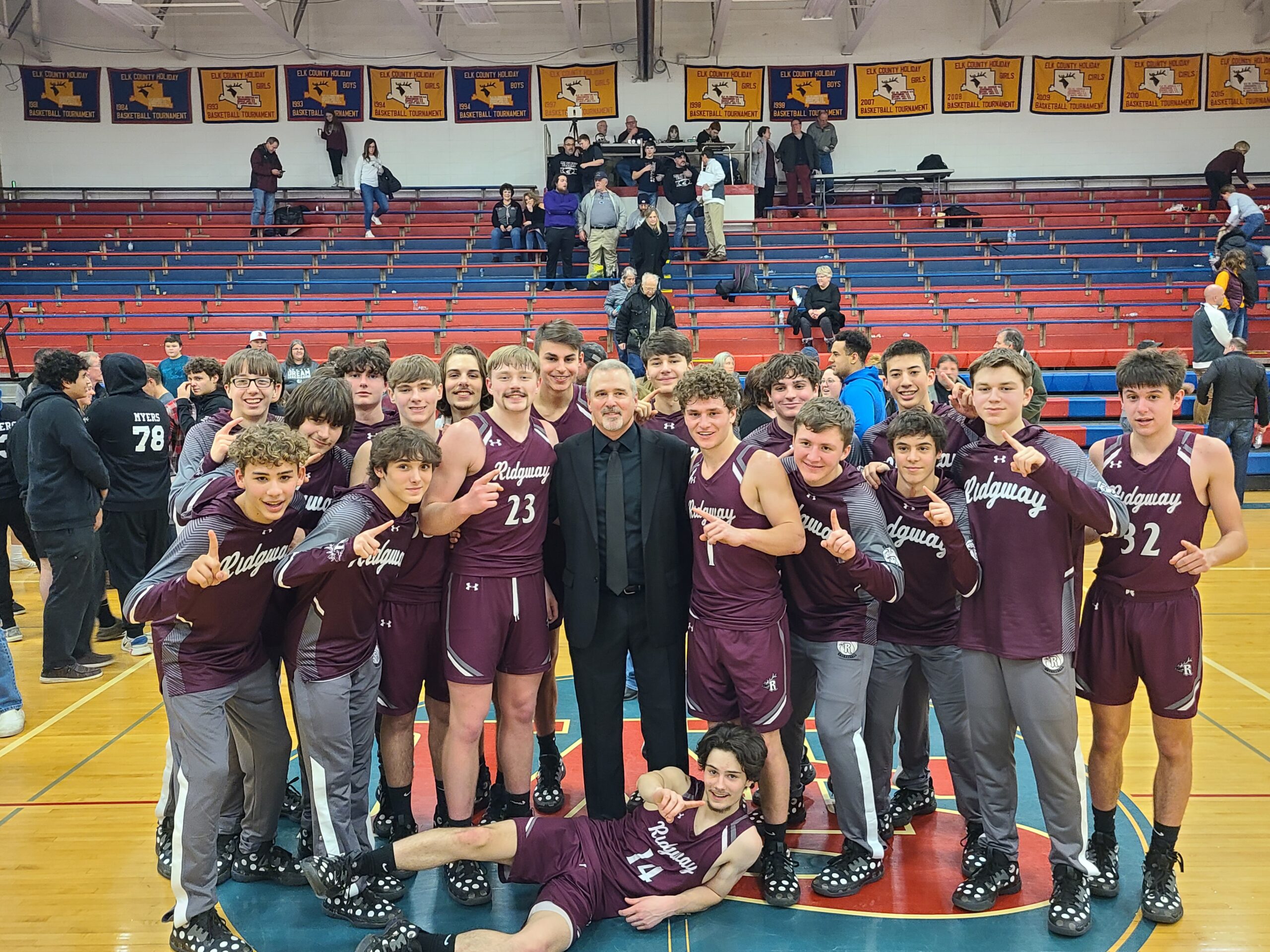 “The kids wanted it,” said Ridgway coach Tony Allegretto. “We needed a good start and we got it. Start to finish, the seniors – Dom (Allegretto) and Dan (Park) – that was a great game for those two. Everybody on the court – Erik Panebianco, Aaron Sorg, Jack Benninger – Jack was unbelievable. The last two games against ECC Jack has handled the ball so well.”

That all changed in a hurry in the second half, as the Elkers limited ECC (19-5) to just a pair of Luke Jansen buckets in the third quarter.

Jansen cut the lead to 32-21 with 4:35 to go in the third quarter, but Ridgway responded with an 8-0 run on a pair of buckets from Erik Panebianco, one from Jack Benninger, and a pair of free throws from Aaron Sorg.

ECC didn’t score again until the 5:12 mark of the fourth quarter on a free throw from Michael Jacobs.

“I really don’t pay a lot of attention to the score, but at the end of the third quarter I think we were up 17 and I’m thinking, against our defense, can they score 17 points? The only way they can do it is three balls and foul shots. We played great defense and that got our crowd fired up and it was nice to have that support.”

Fittingly, it was Dom Allegretto and Park that hit a pair of free throws each to cap the scoring, as the duo finished with 15 and 12 points, respectively as the Elkers avenged a pair of losses to the Crusaders this season.

Allegretto talked about the win afterward:

“Coach Allegretto did a great job preparing his team,” said Elk County Catholic coach Aaron Straub. “They came in with a great plan and it looked like we didn’t come in with a very good plan. Their kids played really well.”

Ridgway did jump out to the early lead, but Jansen and Adam Straub knocked down a pair of first-quarter threes to keep it close.

But offensive rhythm was hard to come by for the Crusaders on this night.

“We got really disjointed offensively,” Straub said. “Holding a team to 44 points is a good enough effort to win, unfortunately, we were all over the place offensively. They were very physical and we didn’t match their physicality.”

Those were the only points over the final three-plus minutes of the half until a layup by Benninger with five seconds to go gave Ridgway its nine-point advantage.

“This will help us confidence-wise,” coach Allegretto said.

Elk County Catholic is the top seed in the D9 Class 1A playoffs and will play Friday against the winner of the 8/9 game between Clarion and Sheffield.

Ridgway, meanwhile, is the No. 2 seed in the Class 2A playoffs and will host seventh-seeded Smethport on Wednesday.

ECC Girls Stage Big Rally to Beat DCC in AML Championship Game
District 9 Releases 2022 Basketball Playoff Brackets
This website or its third-party tools process personal data.In case of sale of your personal information, you may opt out by using the link Do not sell my personal information.
×
Manage consent