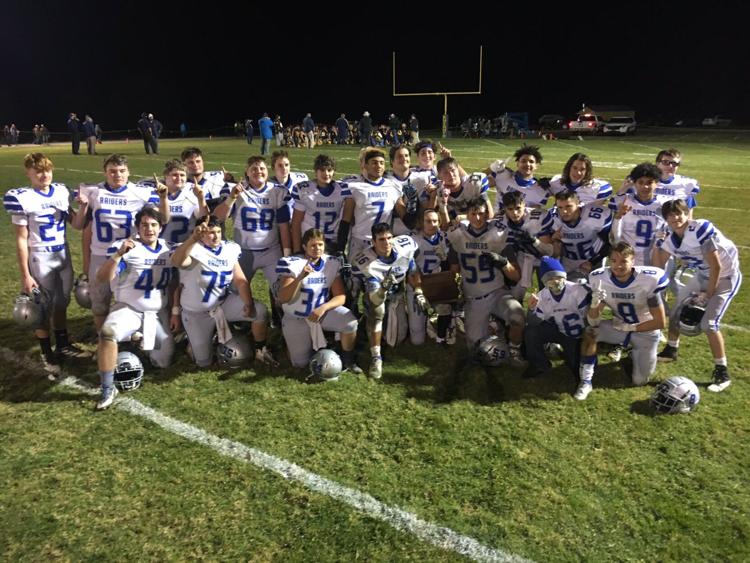 RUSSELL, Pa. – Behind Cole Toy’s tough running and a stout defensive effort, Reynolds won its first District 10 title since 2005 with a 27-0 win over Eisenhower in the District 10 Class 1A championship Friday.

The Raiders’ defense shutout a Knights offense that came into the game averaging more than 400 yards and 46 points per game to just 71 total yards. Reynolds picked up 317 total yards, 287 on the ground.

“It feels amazing,” Toy said. “We’ve been playing together since we were young and to finally get to do this on a varsity scale, it’s fantastic.”

Reynolds set the tone early with a methodical, 69-yard scoring drive that chewed up nearly eight minutes of the first quarter. Toy capped the drive with a 1-yard touchdown run to give the Raiders a 7-0 lead.

After trading punts, Reynolds got the ball back with just over 11 minutes to play in the second quarter. The Raiders went on the slow march again. This time, they needed nearly seven minutes to go 62 yards, with Toy going the final five to make it 14-0.

The Knights got a 14-yard Cael Black run to start the next drive, but-as would become a theme throughout the game-the play was called back due to penalty. Eisenhower picked up a pair of first downs on the drive, but the Raiders defense forced a pair of negative plays to force the punt.

A blocked punt gave Reynolds the ball back off a blocked punt with about a minute left in the half. This time it was the Knight’s defense that stepped up and kept it a 14-0 game at the half.

Neither team was able to finish a drive with points in the third quarter, but Reynolds took over late in the frame and put a drive together that chewed another five minutes off the clock. Toy finished it off with a 7-yard run around the right edge to give the Raiders a 20-0 lead.

Clayton Rhoades intercepted Owen Trumbull, his first interception thrown since Week 1, with just under seven minutes to play in the game. The Raiders took over on their own 12. Toy ripped off a 56-yard first down run, and a personal foul against Eisenhower moved Reynolds to the 17.

Dreyvin Livingston capped the drive and ended the scoring with a 16-yard touchdown run.

Toy ran for 171 yards and three touchdowns on 28 carries to earn Jim Kelly Player of the Game powered by the Allegheny Grille of Foxburg honors. Livingston added 86 yards on 10 carries.

Trumbull was 9-17 for 60 yards passing, but was dropped for (minus)-63 yards rushing. Eisenhower running back Cael Black was held to just 30 yards on eight carries.

The Raiders head to the PIAA State quarterfinals where they will play the winner of Saturday’s game between Northern Bedford and Redbank Valley.

Wilmington Rides O-Line, Bender into PIAA Quarterfinals with Win over Karns City
Erie at McDowell District 10 Class 6A Championship Canceled
This website or its third-party tools process personal data.In case of sale of your personal information, you may opt out by using the link Do not sell my personal information.
×
Manage consent