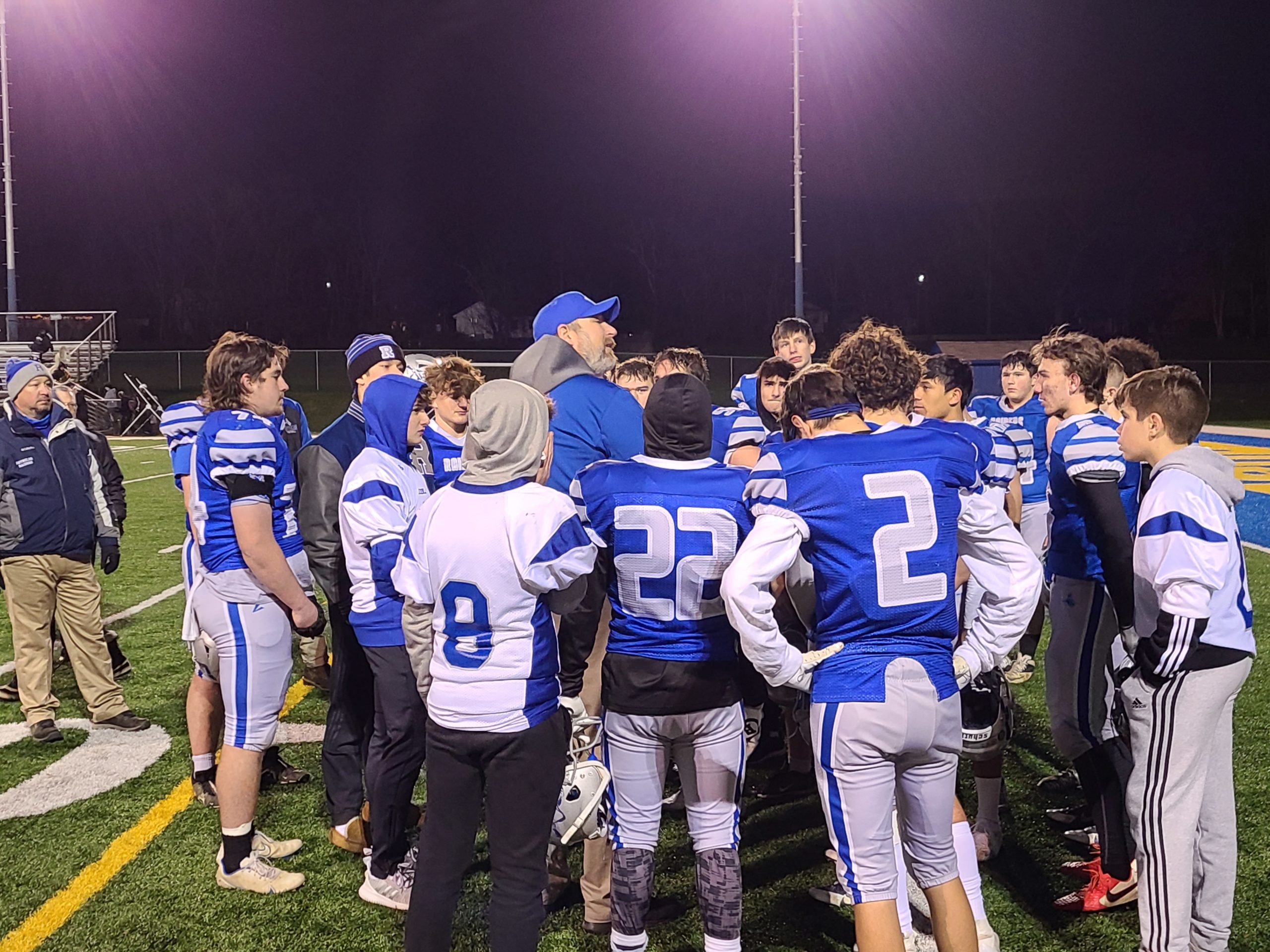 GREENVILLE, Pa. – It all changed in the blink of an eye for the Reynolds Raiders in Friday’s PIAA Class 1A first-round game against Northern Bedford Friday.

Reynolds led 14-7 at halftime, only to watch Northern Bedford scored three third-quarter touchdowns en route to a 35-22 win over the Raiders in the first round of the PIAA Class 1A playoffs.

“We just have to get back to the drawing board,” said Reynolds coach Josh Mull. “It’s the end for these seniors, but we have a nice junior class coming back with some sophomores to fill in. I’m proud as hell of them. They kept fighting. Some things weren’t going our way. We played the entire third quarter on our end of the field and that’s a problem, but the good thing is they’re a good group of kids and they fought right to the end.”

Reynolds accumulated their halftime lead thanks in large part to the play of junior running back Jalen Wagner, who accounted for over 200 yards of offense in the first half and two scores, a 61-yard rush and a 54-yard screen pass from quarterback Brayden McCloskey.

That all changed in the second half, however, as the Panther defense made adjustments and forced some key turnovers to take control of the game.

On Reynolds’ initial drive of the second half, they fumbled, giving Northern Bedford the ball with just 28 yards to go. All the Panthers needed to tie the game was one play, as sophomore quarterback Eion Snider connected with freshman receiver Aaron Bowers for a 28-yard score that, coupled with the extra point, tied the game at 14-14.

The Panthers forced a three-and-out on the next possession and needed less than a minute to take the lead. A 21-yard run by Adam Johnson set up the Snider to Bowers scoring connection again, this time from 21 yards out to give Northern Bedford a lead they wouldn’t relinquish.

A Reynolds fake punt that was unsuccessful on their ensuing possession gave Northern Bedford a short field, and Kainen Brown took advantage, scoring his second rushing touchdown of the game to make it 28-14.

“This is the state playoffs, you can’t turn the ball over in situations like that,” Mull said. “The team that made the least amount of mistakes was going to win this football game.”

The Panthers put the finishing touches on the win with an Eion Snider to Books Snider 14-yard touchdown pass with just over five minutes to go.

The Raiders, showing the fight that Mull alluded to, scored with 56 seconds left in the game on a 2-yard plunge from senior lineman Gavin Aley.

The Raiders were also without the services of standout Haydin McLaughlin, who accounted for over 1,000 yards combined rushing and receiving this season, due to injury.

“There’s a lot of stuff to be proud of here,” Mull said. “I knew they (Northern Bedford) were big and aggressive and were going to come downhill. They did some things that we weren’t ready for and we had to make some adjustments on the fly in the secondary.”

Both of Wagner’s touchdowns came in the second quarter, as he finished with 188 yards rushing on 24 carries and 62 yards receiving. In the process, he eclipsed 2,000 yards rushing for the season. A total of 207 of his 250 scrimmage yards came in the first half.

McCloskey finished with 115 yards through the air and in the process became the first Reynolds quarterback in program history to eclipse 1,000 yards in a season.

Bowers had 130 yards receiving for the Panthers, while Snider had 167 yards through the air to accompany his three scores. Johnson finished with 123 yards on the ground.

For the Raiders, a season that saw them win back-to-back District 10 titles ends at 7-5.

“I think after I left the huddle the kids said it best,” Mull said .”This is a family. When you’re playing with this group of young men, you build bonds that are going to last a lifetime. That’s one of the last things that Marlin Jones said to me and it’s absolutely true. These moments are going to live forever. These kids stuck together and they’re a family.”

District 9 and District 10 Football Live Scoreboard – Week 13 2021 (Nov. 19-20)
Prep Rolls Past East Stroudsburg South in Class 5A First Round; McDowell Rallies Past Allderdice in 6A
This website or its third-party tools process personal data.In case of sale of your personal information, you may opt out by using the link Do not sell my personal information.
×
Manage consent