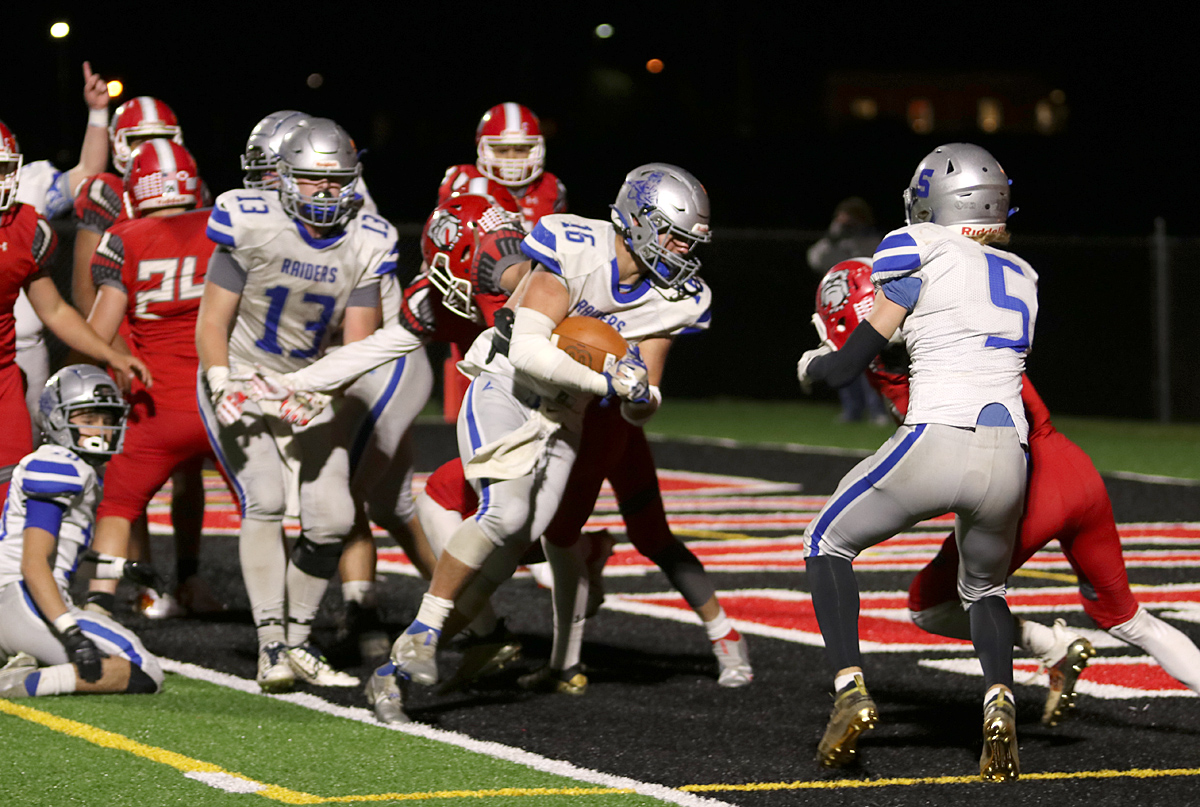 Reynolds' Cole Toy powers into the end zone in the fourth quarter to put the Raiders up 19-7 in Saturday's game against Redbank Valley. The Raiders wound up winning 19-14 as Toy ran for 135 yards on 27 carries. (Photo by Jared Bakaysa of JB Graphics. See more of Bakaysa's work here)

BROCKWAY, Pa. — The Reynolds Raiders secured their first trip to the PIAA Class 1A semifinals in 15 years next weekend.

With all due respect to that 2005 team that finished 11-3 after a loss to eventual champion South Park, head coach Josh Mull told his team afterward that he’d rather talk about the program’s latest state semifinal season instead.

“We’d never thought we’d be here,” said Mull after the Raiders’ 19-14 win over District 9 champion Redbank Valley Saturday at Varischetti Field. “We thought we’d have one to three weeks of football and we’d be done. I told these kids to live in the moment and just enjoy every  single opportunity they have to play.

“We talked a lot at the beginning of the year about how football is a lot like money. Every single second counts. Every penny counts and so often, we don’t think about those pennies and the kids spent every penny out there tonight.”

Next up for the 9-0 Raiders next Friday or Saturday at home actually is WPIAL champion Jeannette, which beat Clairton 45-14 Saturday afternoon.

The Raiders struck for two quick scores from Aidan Mull to start the second quarter for a 13-0 lead. Then in the fourth quarter, Cole Toy’s 2-yard touchdown put Reynolds up 19-7 with 6:51 remaining.

Redbank Valley (7-1) was able to answer that Toy score with a TD of its own to get it to within 19-14, but the Raiders were able to run out the final 5:11, keeling out the clock at the Bulldogs’ 3 at the end.

The Raiders’ running game, the calling card all season, delivered a playoff-worthy performance with 236 yards coming from five different backs led by Toy’s 135 yards on 27 carries. Of that total, 93 of them came in the second half.

“That’s always the goal,” Toy said of the running game. “We love driving the ball down people’s throats and with the line that we have, it’s really nice to get them out there. If you don’t want to run behind them, I don’t know what you’re doing. It’s nice passing with that line, but if you can run the ball with them, you might as well.”

After the Raiders punted away to the Bulldogs after their first drive of the game, it took the defense four plays to come up with the first of three Bulldogs turnovers when Dreyvin Livingston intercepted Bulldogs quarterback Cam Wagner. That set up a 13-play, 75-yard scoring drive finished off by Mull’s 4-yard run three plays into the second quarter.

Four plays later on third-and-19, quarterback Brayden McCloskey found Mull in the middle of the field on a short pass and Mull broke loose for a 43-yard TD to put the Raiders up 13-0 with nine minutes left in the half following Livingston’s point-after kick.

“It was a third-and-long situation and we called a pass and it’s something we haven’t shown this year,” Mull said. “And I actually changed my route in order to get where there was an open field and Brayden threw an amazing ball and the line protected long enough for him to get it off.”

McCloskey completed 5 of 7 passes for 77 yards. It’s the most completions and passing yards in a game this year for the Raiders. Mull caught four of the passes for 71 yards.

After the ensuing kickoff, Redbank Valley was able to answer that score with its own nine-play, 67-yard scoring drive capped by Wagner’s 17-yard pass to Chris Marshall.

Clayton Rhoades’ interception of Wagner on the third play of the second half didn’t lead to any Reynolds points after the Raiders stalled on downs at the Bulldogs’ 28. The Bulldogs stalled on drives at the Reynolds’ 40 and 36 before punting.

The second defensive stop for Reynolds set up the game-securing drive as it went 80 yards on eight plays to go up 19-7 with 6:51 remaining. Seven of those plays were Toy runs gaining 50 yards while two Bulldogs personal fouls totaling 28 yards — both calls appeared to be on the Bulldogs for bad language on the field.

The Bulldogs answered again to make things interesting as it took them seven plays to go 55 yards to score with Wagner hitting Trenten Rupp on a fourth-and-four play for a 12-yard TD pass with 5:11 remaining.

But it was back to Reynolds’ ground and pound running game to run the clock out with eight of 10 plays coming on Toy runs before the Raiders kneeled things out, finishing off a game they had the ball nearly 31 minutes and ran 61 plays to the Bulldogs’ 38.

“I don’t know if you could dream of anything better,” said Aidan Mull of reaching the state semifinals. “We’ve been playing together since first grade, second grade, so to make this far is nice.”

Again! Oil City Earns Second Consecutive 1-Point Win To Advance To Class 4A Semifinals
PIAA Releases Football Semifinal Sites, Times
This website or its third-party tools process personal data.In case of sale of your personal information, you may opt out by using the link Do not sell my personal information.
×
Manage consent