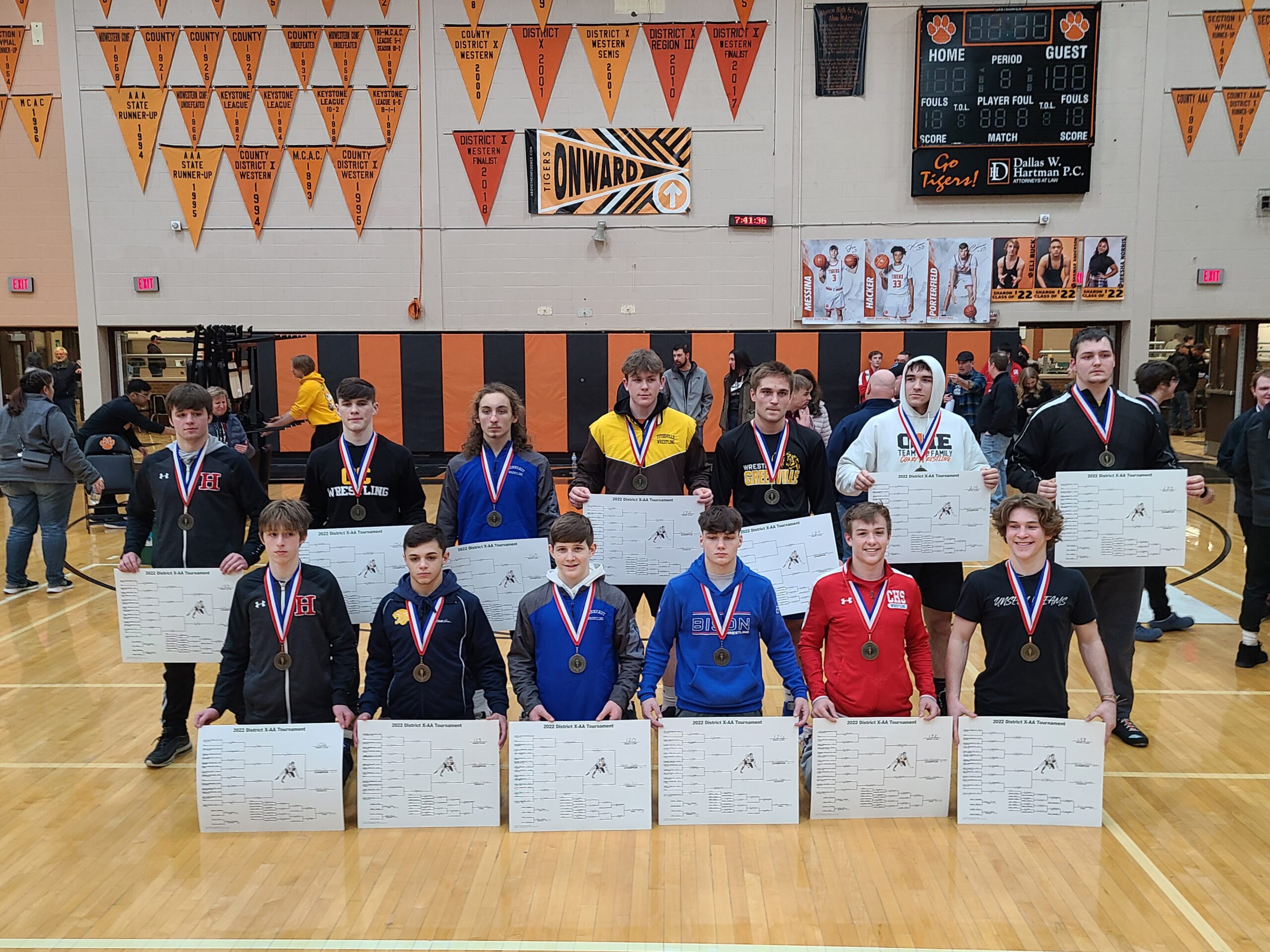 The D10 Class 2A individual champions

SHARON, Pa. – Unbeatens, upsets, and plenty of drama, the District 10 Class 2A wrestling championships had it all.

When the dust settled, Reynolds edged Hickory, 146.5-142 to claim the team title, and Hickory, Conneaut, and Corry crowned two champions each.

“I know everybody wants to win titles, the section, the district, the region, but at the end of the day, we want the kids to wrestle to their ability and beyond,” said Reynolds coach Casey Taylor. “We had to turn the page after last week (sections) and it was nothing but positivity after that. They responded very well with the coaching staff.”

The Raiders didn’t have an individual champion but qualified nine wrestlers for regionals (the top eight in each weight class advanced, including second-place finishes from Chase Bell (120), Kane Kettering (152), and Jalen Wagner.

There were plenty of storylines, including Saegertown’s Hunter Robison (113), Harbor Creek’s Connor Pierce (138), Greenville’s Cole Karpinski (189), and Corry’s Hayden Linkerhof (215) winning titles to match the ones they won in 2021, with Pierce, Grove City’s Hunter Hohman (152), Karpinski and Conneaut’s Hunter Gould (120) all staying undefeated on the season in the process.

The fifth unbeaten heading into districts, Eisenhower’s Cael Black, was edged by Linkerhof in the semifinals, 3-2, before bouncing back to take third.

Hickory’s Louie Gill won a state championship last year but didn’t win a district title in that run. He did so on Saturday, earning a 16-5 major decision over Saegertown’s Carter Beck.

Pierce, who is seeking a fourth-consecutive state medal as a senior, earned an impressive 12-4 major decision over Hickory’s Connor Saylor in the finals. He talked about his performance afterward:

One of if not the marquee matchup of the evening featured Karpinski against Saegertown’s Landon Caldwell. In a matchup of the No. 1 and No. 3 ranked 189-pounders in the state, Karpinski trailed 1-0 until a third-period takedown helped him secure the victory.

At 120, Gould put the finishing touches on his tournament in a workmanlike 7-1 decision over Bell, the sophomore’s first D10 crown.

On the other end of the spectrum, the Corry duo of Xavier Reyda and Linkerhof put the finishing touches on the evening, both getting pins – Linkerhof in the third period and Reyda with five seconds left in the first.

Fort LeBoeuf’s JoJo Przybycien, who took sixth at states as a freshman last season at 126, captured his first D10 title after taking second a year ago. He did so via a hard-fought 5-2 decision over Cambridge Springs’ Gunnar Gage.

Hickory’s 145-pounder, Carter Gill, a district runner-up and seventh-place finisher at Hershey a year ago, advanced to the finals with a 10-4 win over Sharpsville’s Caullin Summers, which was followed by an equally impressive performance in a 13-5 major decision over Girard’s Story Buchanan.

Hohman earned a pin and a tech fall to get to the finals, where he beat Reynolds’ Kane Kettering, 7-1.

Hohman, who was also the starting quarterback on Grove City’s D10 champion football team, talked about the victory afterward:

The 172-pound final between Titusville’s Brock Covell and Reynolds’ Wager was certainly one of the top matches of the tournament. It was Covell, who came away with a hard-fought 6-4 decision.

In addition to the second-place finishes, Reynolds’ Camren Klenke (145) and Vito Gentile (160) took third and Logan Hammerschmidt (113), and Brayden McCloskey (215) were fourth.

“We were able to qualify nine guys for regionals, and that’s the first stepping stone for all of them,” Taylor said. “A lot of our kids placed either at or higher than they did last weekend, which is very important for how you settle into the region tournament.

“Hickory won the district duals, Greenville won the section and we won the district tournament. It does show there’s parity and it shows what’s going to come up that weekend. Hickory looked dominant at the district duals, and that’s a testament to their program and Greenville last week, no one could stop them in the consolation round and they had a couple of winners as well. It just shows. So just overall, I think overall, that was how our team won with the consolation rounds. Guys getting through to that third place. It’s a big difference from meeting that fifth and sixth-place threshold to third and fourth, obviously. But at the same time, I know there are a couple of young men that have higher goals and they’re going to continue to work on them.”

The Northwest Regional is slated for next Friday and Saturday right back at Sharon.

Villa Tops Fort LeBoeuf for D10 Class 4A Championship
Reinsel Wins 4th Straight D9 2A Wrestling Crown; Brookville, B-way 4 Champs Each; 6 D9 3A Champs Powered by Luton’s Plumbing, Heating, A/C
We use cookies on our website to give you the most relevant experience by remembering your preferences and repeat visits. By clicking “Accept All”, you consent to the use of ALL the cookies. However, you may visit "Cookie Settings" to provide a controlled consent.
Cookie SettingsAccept All
Manage consent