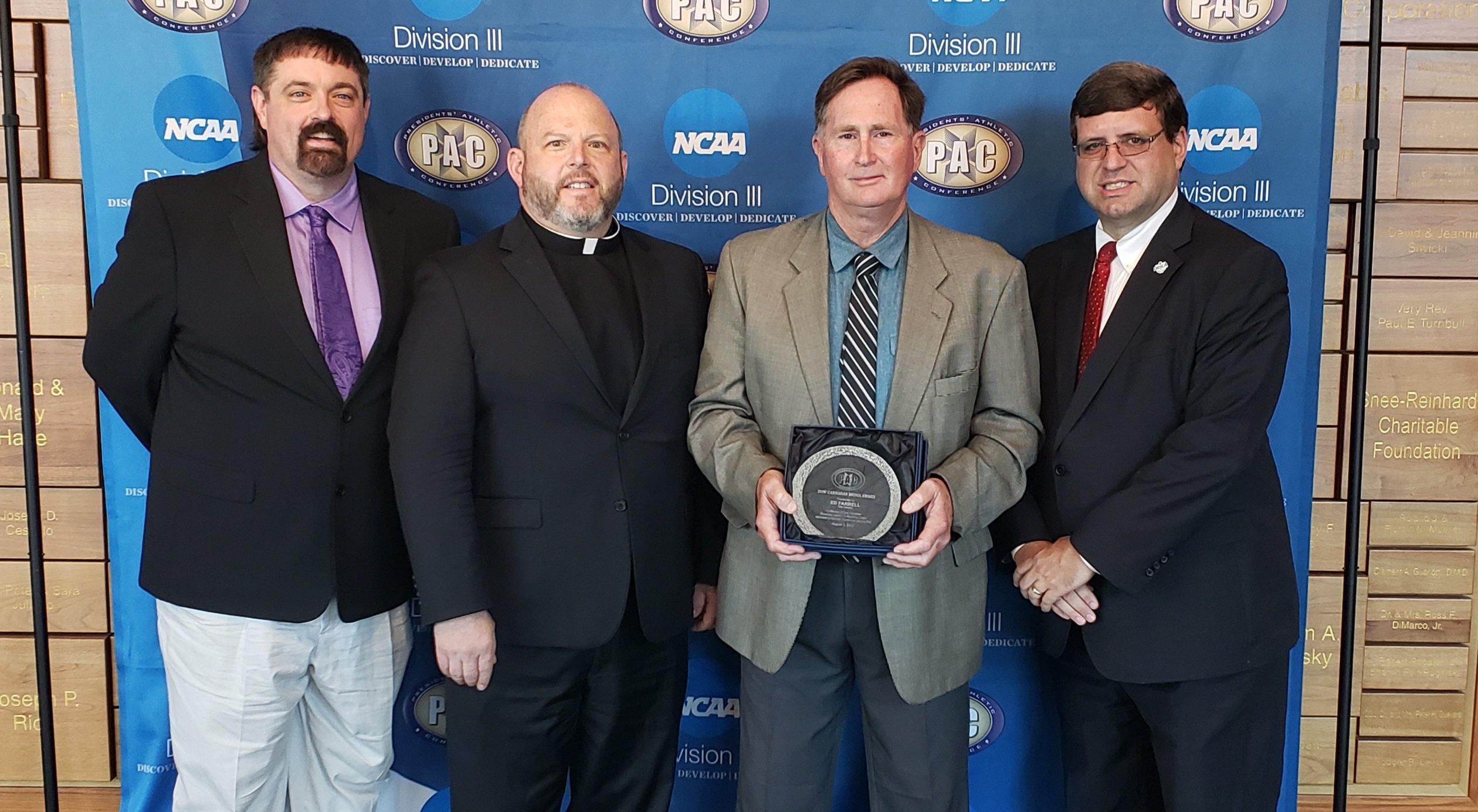 LATROBE, Pa. – For nearly 30 years Ed Farrell’s name was synonymous with covering high school and college sports in Mercer County as a sports reporter at the Sharon Herald.

One of the best dressed sports writers in Western Pennsylvania who recently retired after 27 years and three months at the Herald – he also worked briefly at the Record-Argus in Greenville and the News-Herald (now part of the Derrick) in Franklin – Farrell was honored Wednesday as the Presidents’ Athletic Conference (PAC) Dow Carnahan Media Award winner.

The Dow Carnahan Media Award is presented annually to a distinguished member of the media or on-campus representative for his or her commendable service while covering and promoting the conference’s student-athletes, coaches, and programs.

“Based on what I learned about Dow Carnahan he seemed like such a humble person, a person who enjoyed what he did,” Farrell said. “So, I’m hoping I live up to that standard.”

Grove City Sports Information Director Ryan Briggs, who was instrumental in Farrell’s nomination for the Carnahan Award, would say Farrell has lived up to Carnahan’s standard.

“He was involved in covering the league for a long time,” Briggs said. “But more importantly than that, it’s not the quantity, it’s the quality. It’s his work, it’s his efforts, his concern, his care for people, not just what a player accomplished, what a particular game meant. He cared about people. I think that really is what has stood out about Ed throughout his career. His care for people is genuine. He embodies what this award is all about just like our previous recipients, and we’ve had those from radio, from print media, from various areas of sports media, and they have all reflected those ideals and Eddie certainly is right there at the top as far as that.”

Farrell said he wasn’t the most talented writer but he believes his work ethic was key throughout his career.

“You put in the effort and it sounds like a cliche, but you put in the effort,” Farrell said. “It never seems like work because you’re enjoying what you’re doing. It’s kind of a passion in life. So hopefully I kind of live up to the standard.”

Briggs, who also does radio work for Cumulus Broadcasting’s News/Talk 790 and Sports Radio 96.7 on a regular basis as a play-by-play commentator for the stations’ high school sports coverage and has run professerbriggs.com covering Mercer County Sports since 2001, said you always knew it was a big game when Farrell was there.

Farrell arrived in Mercer County by way of working in the then-Public Relations office (later, “Media Services”) at Thiel College on Sept. 21, 1977 and was at the College for almost four years, the first three of which he served as sports information director both for Thiel and the PAC. He subsequently worked for newspapers for approximately 40 years, including the Jefferson (Ohio) Gazette, Greenville (Pa.) Record-Argus, Franklin (Pa.) News-Herald, and Sharon (Pa.) Herald.

Farrell is the father of three grown children: Shawn Robert, 39; Christopher Jordan (“Jordy”), 38, and Elysa Patrice (36), all of whom were born and raised in Greenville. Jordy and Elysa both graduated from Thiel on May 3, 2008. Farrell also enjoys spending time with his longtime girlfriend, Renee Hartwell.

Farrell, who will turn 68 years old on October 10, has been playing “Senior” baseball for approximately the last 15 years and is currently on the rosters of four teams, including 50-, 58-, 65- and 70-year-old age groups.

DuBois Sees Late Lead Slip Away in Elimination Loss at PA Little League Championships
ACV/Union’s Smith Wins AAU Junior Olympic High Jump Title
This website or its third-party tools process personal data.In case of sale of your personal information, you may opt out by using the link Do not sell my personal information.
×
Manage consent