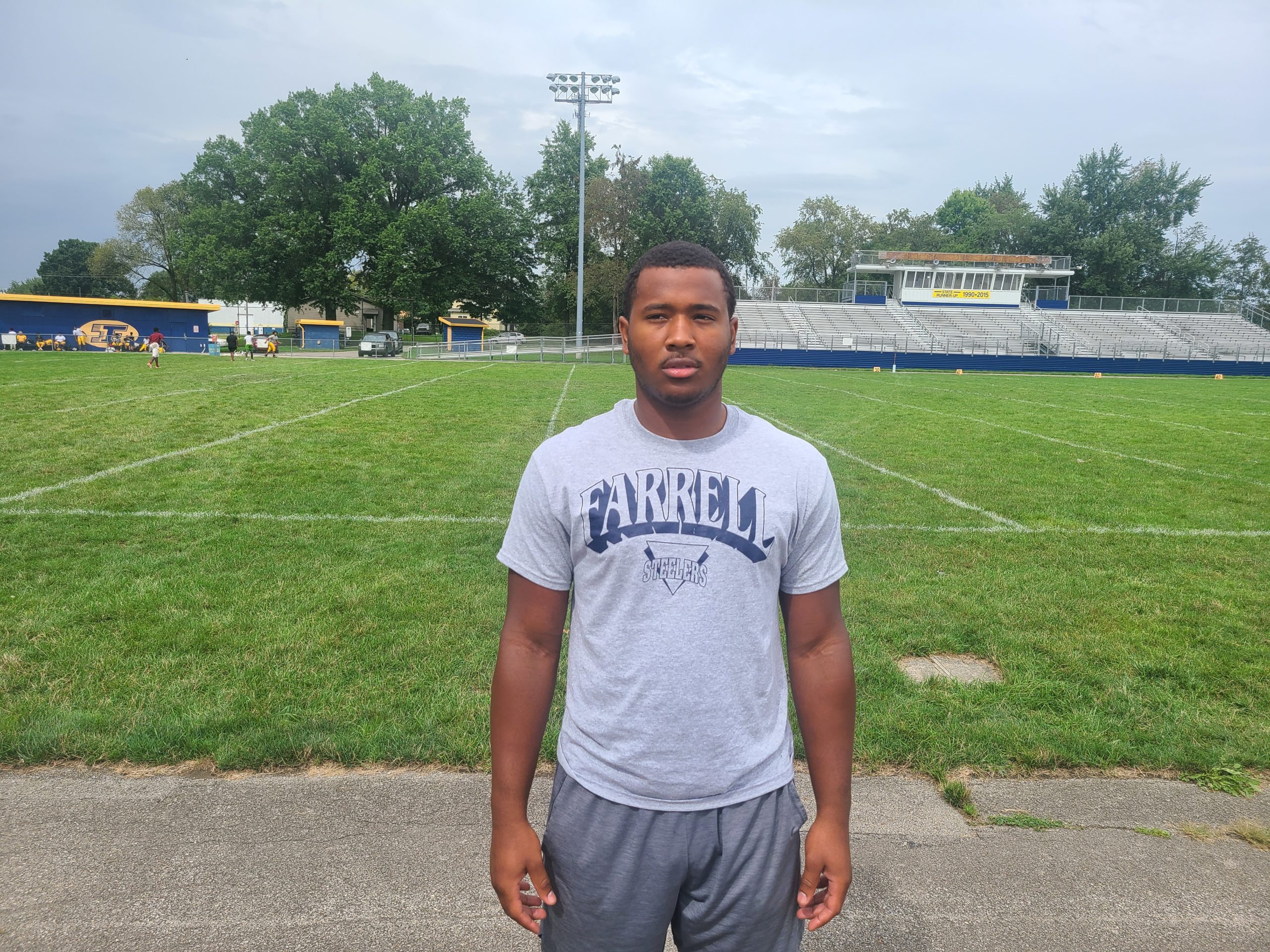 Taidon Strickland and Farrell battle Mercer in a Region 1 showdown.

Despite a couple of games getting postponed, it’s still a busy weekend for District 10 football.

After a pair of games on Thursday, 13 contests are on the slate for Friday and three more on Saturday.

Defenses ruled the day in Week 1, as there were a total of six shutouts. There are some intriguing region showdowns featuring 1-0 teams including Mercer at Farrell, Maplewood at Northwestern and Harbor Creek at Warren.

Here’s how the slate sets up for Week 2.

The Steelers maintain their No. 2 spot in the Class 2A state rankings following a 58-0 shutout of Greenville in Week 1, while Mercer was also dominant in a 45-16 win over Kennedy Catholic. The Steelers rushed for 263 yards in the win over Greenville, including 102 from Anthony Stallworth, 75 from Brandon Chambers and 50 from Lamont Samuels. Kylon Wilson and Omar Stewart Jr. each had receiving touchdowns on passes from Kabron Smith and Trian Holden. Wilson also returned the opening kickoff for a touchdown.

Ethan Wiley connected with Logan Turton on a pair of touchdowns for Mercer in their win over Kennedy Catholic. Turton had 87 yards receiving and Jake Badger 85 yards on the ground and a pair of scores. Mercer’s first-team defense was dominant, as the Kennedy Catholic touchdowns came after the mercy rule was in effect.

The Sailors look to start the season 2-0, while Greenville looks to rebound from the loss to Farrell. The Trojans are tasked with slowing down do-it-all quarterback Gavin Murdock. In a 41-7 win over Titusville, Murdock threw for 173 yards and a pair of scores and ran 130 yards and a touchdown. Calogano Wilkins eclipsed 100 receiving yards as well.

Mason Dickens had 69 of Greenville’s 85 rushing yards against Farrell, while quarterback, while Jalen Ritzert threw for 58 yards.

Two teams looking for their first win, as Kennedy Catholic fell to Mercer and Reynolds, the defending D10 Class 1A champion, was blanked by Wilmington 50-0. Jalen Wagner had 66 yards rushing for Reynolds in Week 1, while the Raiders completed just 1-of-12 passes.

Rayvion Wilbon-Venable threw a pair of second-half touchdown passes for Kennedy Catholic to Sean Yeager and Simeir Wade and finished with 200 yards through the air against Mercer.

An early season-matchup that could have Region 2 title implications as the Tigers travel to Albion to take on the Wildcats. Both teams took care of business in Week 1, as Maplewood beat Iroquois 35-7 and Northwestern took care of Seneca, 35-6. Ben Gilberto had a big game on the ground for the Tigers in their Week 1 win, rushing for 161 yards and two touchdowns, while Dominick Kinney had 62 yards on the ground and a pair of scores.

Star quarterback Ryan Tewell threw for a pair of touchdowns for the Wildcats in their victory over Seneca, while Ben Campbell was over 100 yards on the ground with a pair of scores.

The Knights took two games from Union City last year and will look to get the best of the Bears again in 2021. Both teams were involved in shutouts in Week 1, a 14-0 win for Eisenhower over Saegertown, while the Bears fell to Cochranton 22-0. The Knights limited Saegertown to 144 yards of offense and got 124 yards and a rushing touchdown from Keegan Eckstrom. Garrett Jensen made his first start at QB and completed 6-of-9 passes for 63 yards. Four of those completions went to Benji Bauer for 43 yards. Union City was limited to 66 rushing yards in the loss to Cochranton, led by Owen Kerns’ 56.

Another game that could have region title implications, as the Lancers are coming off a 33-12 win over Oil City and Meadville lost a 50-48 non-region thriller to Grove City in Week 1. John Amon was the story for GM last week, rushing for 139 yards and two touchdowns and was on the receiving end of a Dylan Sheeder touchdown pass. Sheeder threw for 172 yards and three scores, two of which went to Magnus Lloyd, who had 92 yards.

As per usual, Meadville gets it done with its vaunted rushing attack. The Bulldogs rushed for 472 yards against Grove City, with Griffin Buzzell carrying for 192 yards and three touchdowns and Khalon Simmons 169 yards and two scores.

Sharon made quick work of Corry in Week 1, winning 49-0 in a game that was called at halftime due to thunderstorms. Ja’on Phillips had himself a game, catching a pair of touchdown passes from Mikey Rodriques while also returning an interception for a touchdown. They will be facing a University Prep team out of the Pittsburgh City League that is coming off a 27-0 loss to Highlands in its opener.

A couple of teams that will look to get going after Corry got blanked by Sharon and Titusville lost to Lakeview. Garrett Knapp actually got the Rockets on the board first against Lakeview with a 1-yard touchdown plunge, but the Sailors scored 41 unanswered points. Corry, meanwhile, got 60 yards passing from Nathan Lesher in the loss to Sharon.

Two teams that are coming in on opposite ends of the spectrum, as Fairview rolled to an impressive 37-0 win over Cambridge Springs, while Franklin fell to Harbor Creek, 42-7. Jared Genusso rushed for 103 yards and four touchdowns, while Charlie Chevalier had 69 yards rushing. Tyler Corbin completed five passes for 79 yards and also added a rushing touchdown for the Tigers. Cole Buckley threw for 124 yards and a touchdown for Franklin against Harbor Creek.

North East is coming off a 56-6 loss to Laurel of the WPIAL, while this will be the third game for Conneaut after beating Edgewood in its opener (41-6) and falling to Buckeye (37-7) last week. The Spartans will look to get things going on the ground, as Zack Rice has rushed for 262 yards in two games with three touchdowns. A Jackson Humes to Zane Strong touchdown connection accounted for the Pickers’ lone score last week.

It was a tough start to the season for both teams, as Hickory fell to Ursuline (Ohio), the top-ranked Division IV team in the Buckeye state, 50-7, while Girard lost to D9 power Karns City, 35-17. Junior quarterback Logan Woods threw for 114 yards and a touchdown to returning all-state receiver Ramarion Whitehead to account for Hickory’s lone score. Ursuline limited the Hornets to just 38 yards rushing.

Girard did almost all of its damage on the ground against the Gremlins, with Gunner Bax eclipsing 100 yards and scoring a touchdown.

McDowell opened its season in impressive fashion with a 35-33 win over Lake Catholic (Ohio). They look to keep the momentum going against Brasher out of the Pittsburgh City League. Christian Santiago was clutch for the Trojans in Week 1, rushing for 100 yards and three touchdowns. Brashear is coming off a 33-6 loss to Pallotti (Md.)

Both teams opened the season in impressive fashion, Harbor Creek beating Franklin by 35 and Warren blacking Conneaut, 33-0. It was the Cam Williamson show for the Huskies in Week 1, as he rushed for 263 yards and three touchdowns. Matt Cassidy also had a monster game with 179 yards and a pair of scores.

For Warren, No. 2 quarterback Eric Dippold stepped in for the banged-up Landon Douvlos threw for 124 yards and a pair of touchdowns to Ben White (76 yards receiving). The Dragons also rushed for 196 yards, led by Tommy Nyquist (100 yards, 1 touchdown) and Ethan Senz (89 yards, 1 TD).

It’s been quite the two weeks for Slippery Rock already, as they played Central Clarion County instead of their scheduled opponent in Week 1, Fort LeBoeuf, and now face Sharpsville instead of Mercyhurst Prep. William Mokel threw for 140 yards and two scores in the 38-7 win, while Shane Thompson had 92 yards and a score on just seven carries and also added a receiving touchdown.

Caullin Summers’ 23-yard touchdown pass to Blaze Knight, coupled with the accompanying extra point late in the fourth quarter lifted the Blue Devils to a 7-6 win over Loudonville (Ohio) in their first game co-oping with West Middlesex.

Grove City is coming off the wild 50-48 win over Meadville, while Fort LeBoeuf will play its first game after being forced to cancel last week due to COVID-19 issues. Curtis Hovis had a monster game, rushing for 226 and four scores on his way to District 10 Jim Kelley Player of the Week honors powered Allegheny Grille of Foxburg. Hunter Hohman threw for 232 yards and three touchdowns, two of which went to Joey Hathaway, who had 110 yards receiving.

Big Plays Send Oil City Past Conneaut; Cathedral Prep Beats Erie as Game Called Early
D9and10Sports.com to Video Broadcast Pair of Football Games Friday
This website or its third-party tools process personal data.In case of sale of your personal information, you may opt out by using the link Do not sell my personal information.
×
Manage consent