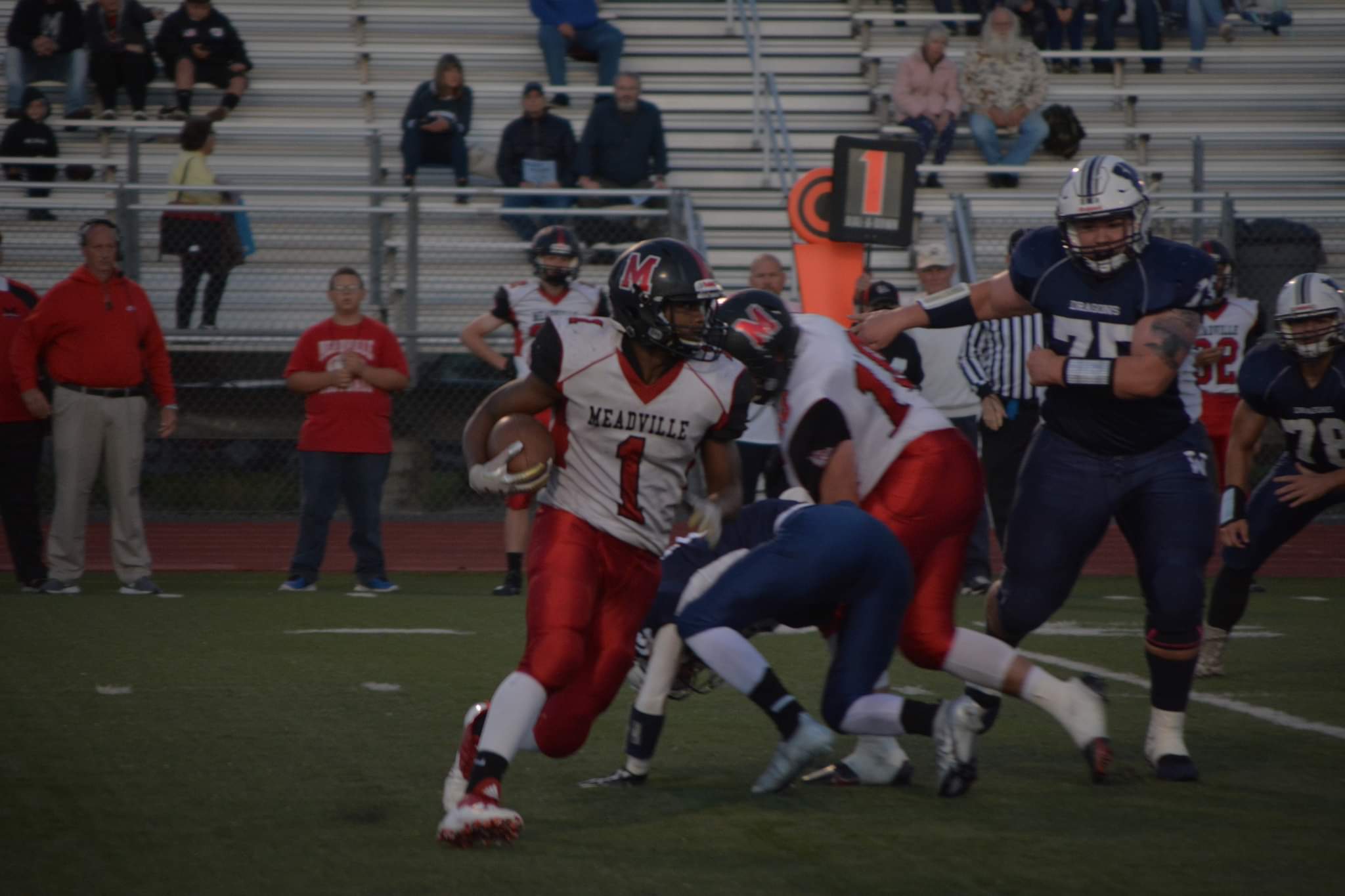 It’s week three in the high school football season, and there are plenty of juicy matchups in District 10.

Region 3 gets its gauntlet of a schedule going, with Farrell-Grove City, Hickory-Sharon, and Greenville-Slippery Rock dotting the slate.

A matchup of the defending Class 2A and 3A champs in D10. Farrell is coming off a 40-38 loss to Ursuline (Ohio) in a thrilling game, while Grove City powered past Northwestern, 42-7.

Both quarterbacks come in red-hot, as Farrell’s Kabron Smith has thrown for 451 yards, while Hohman checks in at 359.

Both teams come in after convincing wins, Hickory 62-3 over Franklin and Sharon 42-0 over Warren.

Sharon’s Mike Rodriquez threw for 96 yards and a touchdown against Warren, while Jayveerh White has 190 rushing yards through two games (six quarters, the game with Warren was called at halftime).

Greenville has had some tough luck this season early on, dropping a pair of close games to Hubbard (Ohio) and Wilmington, while Slippery Rock is coming off wins over General McLane and Mercyhurst Prep to open the season.

Rock quarterback William Mokel has thrown for 492 passing yards and five touchdowns, with John Sabo accounting for 142 of those yards. Maddox Allen, meanwhile, is coming off a 104-yard, 85 receiving yards effort against Mercyhurst and three total touchdowns.

Malachi Hyde leads the Greenville rushing attack with 131 yards rushing, while quarterback Nick Solderich is completing 50 percent of his passes.

It will be a battle of rushing attacks when Kennedy Catholic travels to Lakeview.

The two teams met a year ago, a thrilling 18-15 win for Kennedy Catholic.

Maplewood comes into the game at 2-0 after doubling up Iroquois 40-20 last week, while Cambridge Springs is coming off a 27-14 loss to Eisenhower.

Morgan Applebee has been the catalyst for the Cambridge Springs’ offense with 193 passing yards and three touchdowns and a pair of rushing touchdowns. Van Jones has 112 yards on the ground for Cambridge Springs through two games.

A pair of teams looking to pick up their first win, as Saegertown is coming off a 35-15 loss to Lakeview, while Cochranton had a week off following a season-opening 41-0 loss to Eisenhower.

The Bears built a 20-0 lead and held on for a 26-20 win over Kennedy Catholic last week, while Eisenhower was impressive in a 27-14 win over Cambridge Springs.

The Bears have found success on the ground, as Clay Thomas comes in with 260 yards and a pair of scores and Skylar Olmstead with 184 yards and a tochdown.

Northwestern is looking to bounce back after a tough loss to Grove City last week. Ben Campbell leads the way after accounting for over 100 yards on the ground in a season-opening win over Girard, while Lloyd Fountain is dangerous at quarterback, with receiver Landon Wayne combining to lead the aerial attack.

Don’t let the record fool you, Mercyhurst Prep is coming in after a pair of competitive losses to talented Fairview and Slippery Rock squads.

David Bahm is adept as a passer and a runner for the Lakers, accounting for 232 yards in the air and two scores, and 140 yards on the ground. His top target is Ja’sonEllman (110 yards).

Seneca, meanwhile, is coming off wins over Lakeview and Conneaut to begin the season. Do-it-all quarterback Nolan Seabury and Ryan Miller are a big threats in the run game as well.

A non-region showdown as the Bulldogs and Tigers do battle. Fairview’s defense has been dominant in wins over Mercyhurst Prep and Harbor Creek, yielding just 22 total points. Offensively, Tyler Corbin has combined for three touchdowns passing and rushing, while Charlie Chevalier and Jared Gennuso have 149 and 132 yards on the ground, respectively.

They will be facing a powerful Meadville rushing attack that is feeling good about itself after a 21-14 win over Class 6A Butler. Brady Walker and Khalon Simmons, the latter of whom was unavilable in the win over Butler. Meadville also owns a 55-6 win over Corry.

West Toronto Prep is getting used to Erie County, as they came away with a win over the Erie Royals last week.

Prep, meanwhile, is coming off a thrilling 22-17 win over Clarkson North in which Carter Barnes threw a touchdown pass to Suhtaun Lewis with under 30 seconds to play.

Barnes has 175 yards passing and 89 rushing through two games, while Lewis has 281 yards rushing as well as 53 receiving. Wakeem Page also has 82 receiving yards.

A matchup of early-season unbeatens and vaunted offensive attacks will collide when these two teams take the field.

Jalen Wagner already has 591 rushing yards on the ground this season with seven touchdowns, while Brayden McCloskey is dangerous as both a runner and a passer.

Sharpsville’s Caullin Summers has thrown for 506 yards through two weeks. Garen Levis is his top target, accounting for 131 yards in last week’s win over Titusville.

A powerhouse matchup featuring two top 10 teams in the Class 6A state rankings.

McDowell is flying high after a 34-28 overtime win over Bennett (NY) in which Christian Santiago had both the game-winning touchdown and the game-ending sack.

Santiago and Artis Simmons lead the rushing attack, while Ben Moore has had a strong couple of games through the air.

North Allegheny is coming off a 35-31 win over Canon-McMillan. Logan Kushner has thrown for 368 yards and four touchdowns, while Khiryn Boyd has 233 of those yards and a score. Andrew Gavlik leads the rushing attack 115 yards.

The Lancers bounced back from a tough opening loss to Slippery Rock with an 18-7 win over rival Fort LeBoeuf last week.

Dylan Sheeder accounted for three total touchdowns – two passing and one rushing and was over 130 yards in the air and had 70 on the ground. Landon Laskey and Kyle Cousins were on the receiving end of those scores.

Hunter Marsteller and Franklin are looking to bounce back from a tough loss to Hickory.

What hasn’t Ethen Knox done through two weeks? He’s coming off a 400-yard performance against Corry in which he rushed for a school-record seven touchdowns. On the season, he is at 706 yards and 12 total touchdowns and also intercepted a pass on defense last week.

The Oilers will be facing a North East team that is coming off a 31-14 loss to Girard.

Ben Miller and Tyler Mikulin were both over 100 yards on the ground as Wilmington rallied for a thrilling win over Greenville last week. Miller has 209 yards so far on the season.

Mercer is looking to bounce back after a tough setback to Reynolds. Daemyin Mattocks and Nic Michael lead the rushing attack.

The Jackets are coming off a 31-14 win over North East, while Warren struggled in a 42-0 loss to Sharon.

Quarterback Gabe Messmer as well as Gunner Bax and others will look to lead the Jackets to their second-straight win in a game that will be played in Youngsville due to turf renovations at Warren.

The Dragons, meanwhile, look to get back on track with quarterback Eric Dippold and running backs Tommy Nyquist and Ethan Senz leading the way.

It’s been a tough couple of games for Corry opening against Meadville and Oil City. Now they get a Conneaut team that is 2-1.

Butler is looking to bounce back from a close 21-14 loss to Meadville. Quarterback Mac Schnur has thrown for 401 yards, with Deshawn Cox (155 yards receiving) his top target. Cox also has accounted for 189 yards on the ground.

Brashear is coming off a 42-12 loss to Wheeling Park (West Virginia).

Wings Up: The Raymond Monica Show! Episode 2
2022 District 9 and District 10 Week 3 Football Predictions
This website or its third-party tools process personal data.In case of sale of your personal information, you may opt out by using the link Do not sell my personal information.
×
Manage consent