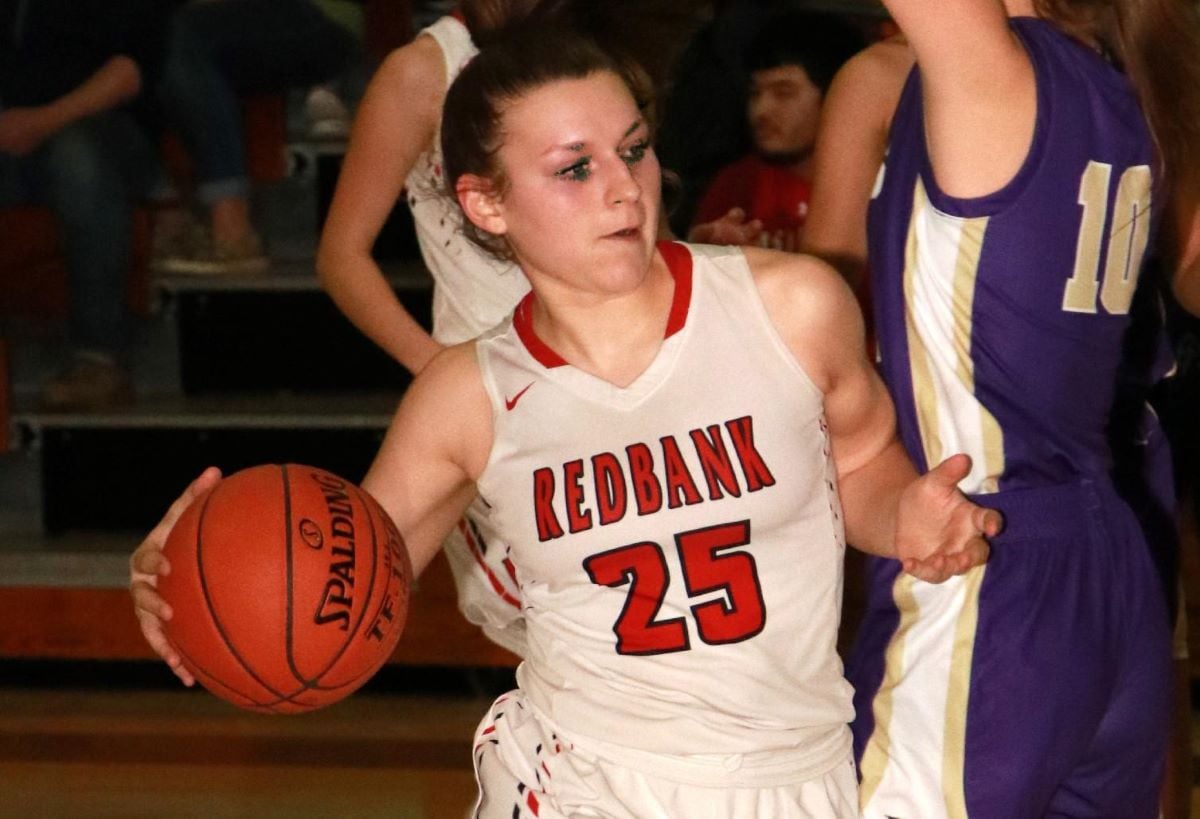 Alivia Huffman had 26 points and 10 rebounds to help Redbank Valley move into the D9 3A title game. Photo by Mike Maslar

BROOKVILLE, Pa. – Gunning for another shot at winning a District 9 title, Redbank Valley checked off another box on its season checklist.

The Lady Bulldogs won their first KSAC title since 1993 last Saturday and Friday night’s 49-39 win over Karns City in the District 9 Class 3A semifinals give them a shot at a district championship sometime next weekend.

It would be Redbank Valley’s second D9 title in three years if it were to win the championship game, which will be against either Moniteau, the team that knocked the Lady Bulldogs out in the semifinals last year, or Punxsutawney. Their matchup was supposed to be Friday in Brookville as well but moved to Monday in DuBois because Moniteau didn’t have school and was unable to play.

“We’re very excited,” Lady Bulldogs head coach Chris Edmonds said. “We had two goals coming into the season, the KSAC championship and getting to the District 9 Class 3A championship game. We put ourselves in a position to play in that game.”

Redbank Valley (22-4) forced 27 turnovers and made life hard on Karns City offensively all night, although the Lady Gremlins (13-10) didn’t go away all that easily. Alivia Huffman had another big game with 26 points and 10 rebounds to spark the Lady Bulldogs offensively.

Huffman was whistled for a technical foul in the first quarter and picked up her third personal with 1:32 left in the second quarter, but stayed out of foul trouble the rest of the game.

She was named the Allegheny Grille of Foxburg Player of the Game and talked about the win.

The Lady Bulldogs, up 25-20 at halftime, held Karns City scoreless for the first 6 1/2 minutes of the third quarter, enabling them to build a double-digit lead that had them up by as many as 18 points midway through the fourth quarter at 42-24. Karns City did cut it to eight in the closing seconds.

Karns City’s season came to a close with the loss, while Redbank Valley has qualified for the PIAA playoffs.

DUKE CENTER, Pa. – Otto-Eldred went on 7-0 and 6-0 runs to start the first and second quarters and never trailed en route to a 52-22 win over Union in the Class 1A quarterfinals.

The third-seeded Lady Terrors also held the sixth-seeded Damsels scoreless for 5:25 in the third quarter, while pouring in 18 points during the quarter themselves.

Katie Sheeler capped the third with a buzzer-beating 3-pointer from just inside the midcourt line.

“We wanted to start fast, see if we can take advantage of that (long trip for Union) if we can,” Otto-Eldred coach Shawn Gray said. “I think we did in the first quarter. We kind of jumped on them.”

As a team, the Lady Terrors connected on six threes in the game.

Sheeler had a pair and Anna Merry had three, as they each finished with 15 points.

“We were all just feeling it,” Sheeler said.

Bri Heller got the Otto-Eldred offense rolling as she scored eight of her 14 points in the first quarter.

Otto-Eldred advances to the semifinals where the Lady Terrors will take on North Clarion on March 1 at a time and location to be announced. Otto-Eldred qualified for the PIAA playoffs with the win.

Union will host Clarion in the consolation bracket at a date and time to be determined.

Big Guns Set to Take the Mat at District 9 2A Wrestling Championships
DCC, Otto-Eldred, ECC, North Clarion Advance to D9 1A Boys’ Semifinals
This website or its third-party tools process personal data.In case of sale of your personal information, you may opt out by using the link Do not sell my personal information.
×
Manage consent