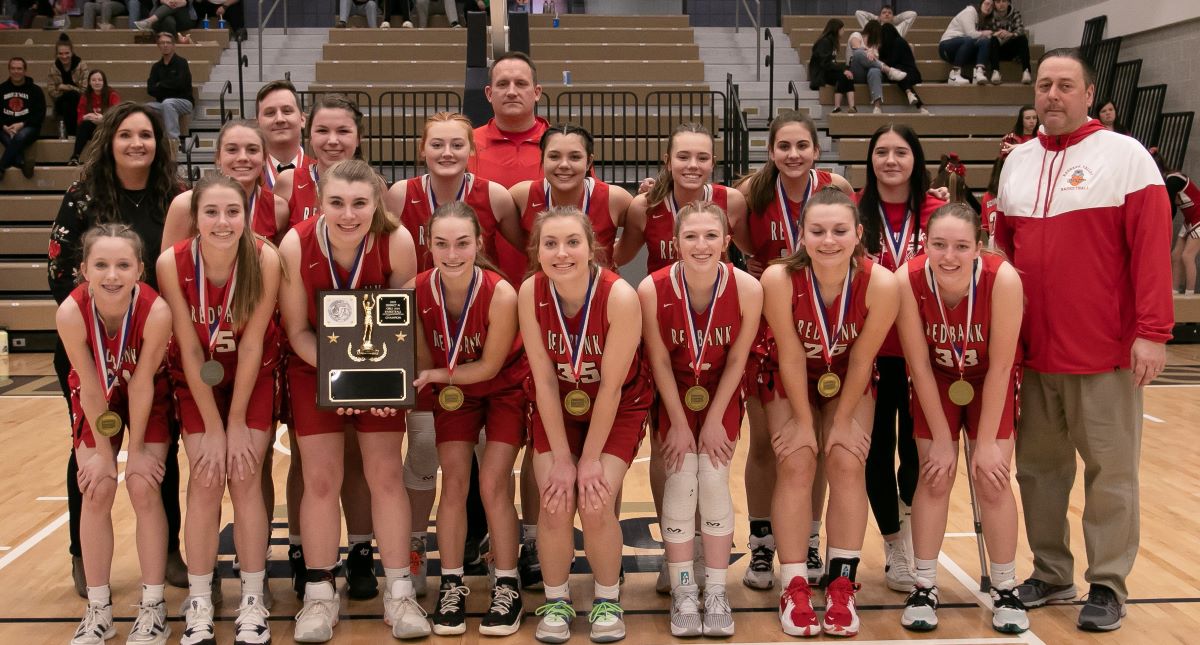 The loss by the Lady Chucks snaps a streak of eight consecutive titles (7 in 4A and 1 in 3A) for Punxsutawney.

“We’ve had the seniors since third grade,” Redbank Valley head coach Chris Edmonds said. “We used to play Punxsy all the time at the Punxsy Community Center, and it meant a lot that they could’ve been our last game.”

But Punxsutawney wasn’t the last game for the Lady Bulldogs thanks to the game-ending run that came after things looked like they had turned south for Redbank Valley.

From that point on it was all Redbank Valley.

Caylen Rearick tied the game with 3:50 left and Alivia Huffman knocked down back-to-back field goals and the Lady Bulldogs sat with a 44-40 lead with 1:45 left.

Huffman was limited to playing time in the fourth due to picking up her fourth foul early in the third quarter.

“Us coaches were talking about when to put (Huffman) in,” Redbank Valley head coach Chris Edmonds said. “I made the call, and we got the ball out of bounds, fed her the ball and she just out jumped everyone.”

Rearick added another field goal with 1:15 left and freshman Mylee Harmon went 6-for-6 from the charity stripe to finish out the game giving Redbank Valley its second title in three seasons (the Lady Bulldogs won the 2020 2A crown before being bumped up to 3A the last two years).

“It was nerve-racking,” Harmon said. “But, I had faith in our team that we could come back.”

Harmon finished the game with a game-high 23 points including 9-for-12 at the free-throw line.

“They played a tight man, which allowed us to spread the floor,” Harmon said .”If I had a pick I would go down and score a layup.”

Madison Foringer added 12 points for Redbank while Huffman and Rearick each netted six.

The first quarter ended with the game tied at 11-11 before the Lady Bulldogs expanded the lead to 27-22 at halftime.

Redbank looked to be in control in the third quarter as it led by 12 (37-25) midway through, but Punxsutawney closed the quarter out on a 7-0 run to keep the five-point deficit they had at halftime.

Riley paced the Lady Chucks offense with 11 points. Danielle Griebel finished with nine points, Chloe Presloid knocked down a pair of 3-pointers on her way to eight tallies and Maeve Hanley also chipped in eight.

Redbank Valley will take on Laurel, the fifth-place team out of the WPIAL, Tuesday, March 8. That game will most likely be at Redbank Valley High School.

Greenville Girls Top Lakeview in Class 3A for First D10 Title; West Middlesex (2A), Kennedy Catholic (1A) Also Claim Championships
ECC Girls Get Defensive in Winning First D10 Title Since 2010 in Beating O-E in 1A; NC, DCC Win Consy Games
This website or its third-party tools process personal data.In case of sale of your personal information, you may opt out by using the link Do not sell my personal information.
×
Manage consent