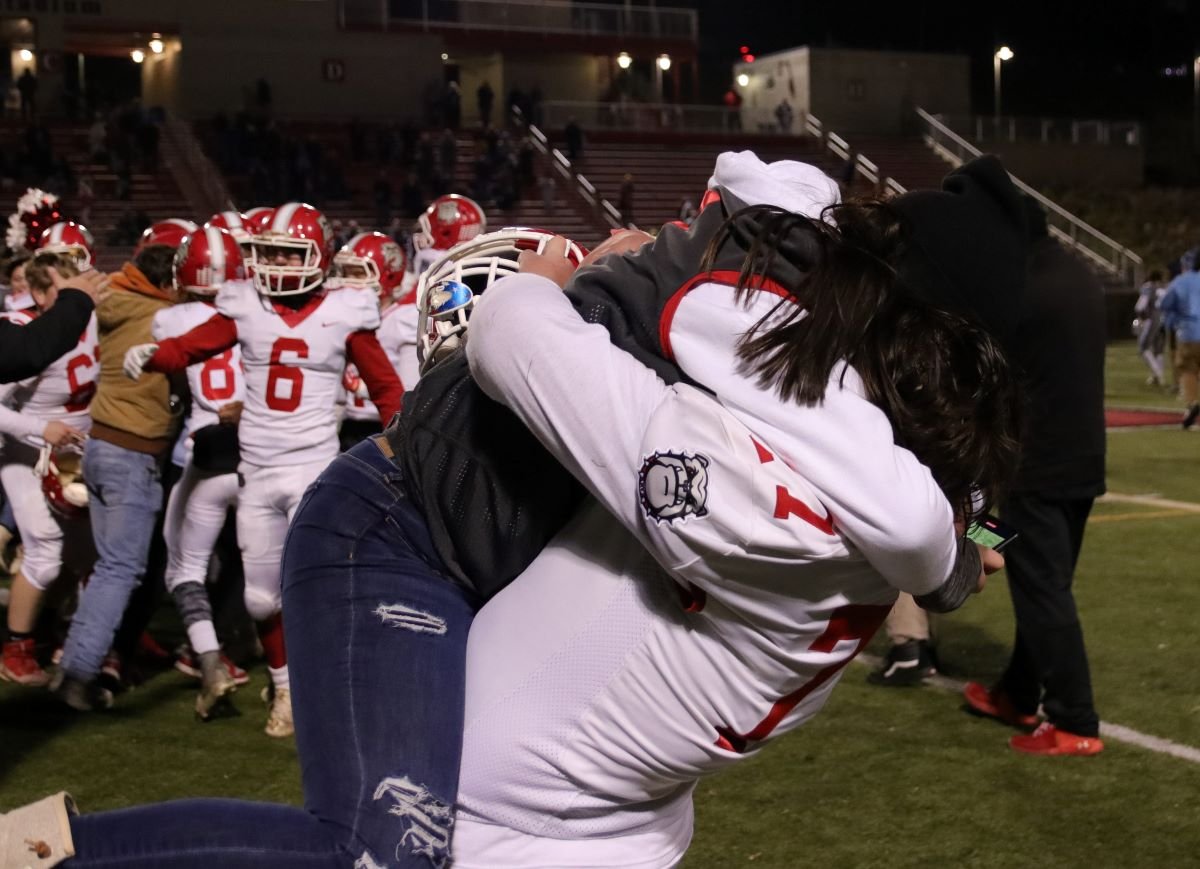 Kade Minnick of Redbank Valley celebrates with a friend after the Bulldogs became the first D9 team since 1992 to reach the PIAA championship game. Photo by Jared Bakaysa of JB Graphics. See more of Bakaysa's work here

The Bulldogs are the first District 9 football team to make the PIAA championship game since 1992 when Smethport beat Rochester 6-0 in Class 1A, and just the third District 9 team to ever qualify for the PIAA title game. Keystone was the first D9 team to make it when it beat Clairton, 15-14, in 1989, just the second year of the PIAA football playoffs.

Redbank Valley is also the first D9 team to ever make the finals having to win more than one game and will look to be the first D9 state football champion when it faces Bishop Guilfoyle at 1 p.m. Thursday at Hersheypark Stadium in Hershey, Pa.

“These kids were playing for District 9, too,” Redbank Valley head coach Blane Gold, who was three years old in 1992, said. “I will never forget a phone call I had with Coach (Mark) Heindl from Ridgway. I remember when they won four in a row (D9 titles), two in Single A and two in Double A. We had a conversation and he said what you did last year (when Redbank Valley reached the PUAA quarterfinals) gave District 9 hope. A lot of kids in District 9 win a D9 champion and that is it. We talked about that this week. This football team isn’t just doing something special for us it is doing something special for District 9 as well.”

Six Turnovers Too Much for Farrell to Overcome in PIAA 2A Semifinal Loss to Serra Catholic
Special Night for Redbank Valley and Special Night for All of District 9
We use cookies on our website to give you the most relevant experience by remembering your preferences and repeat visits. By clicking “Accept All”, you consent to the use of ALL the cookies. However, you may visit "Cookie Settings" to provide a controlled consent.
Cookie SettingsAccept All
Manage consent