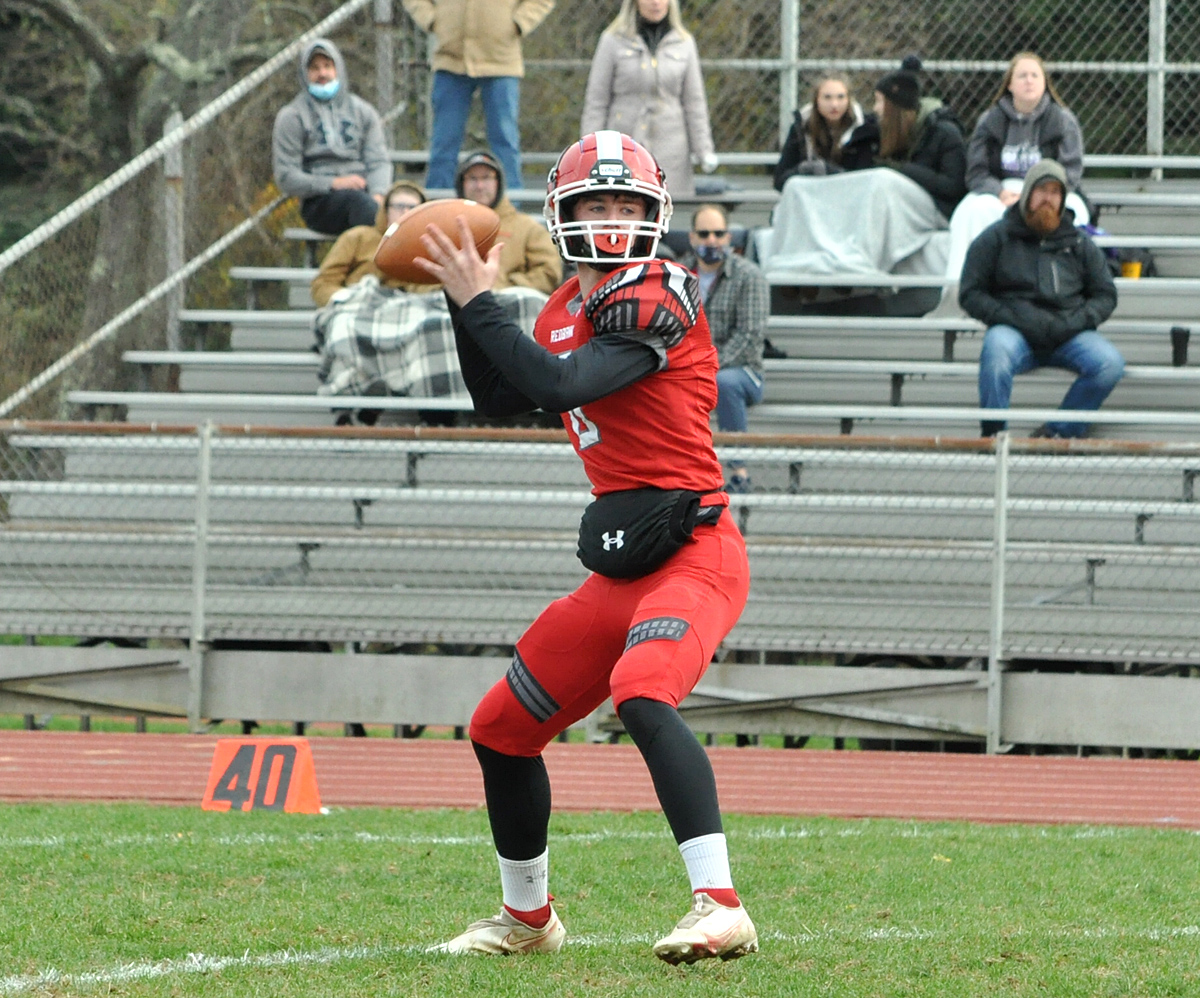 The 5-0 Bulldogs land in next Saturday afternoon’s D9 final against Smethport at Brockway’s Varischetti Field starting at 1 p.m. The Bulldogs haven’t won a championship since 1996, Smethport since 1998.

Redbank Valley beating Coudersport ended a three-game losing streak to the Falcons, two of them in the playoffs including last year’s 42-13 finals loss. And the Bulldogs did it preparing for the Falcons without 18 players who were quarantined for the previous 10 days, unable to practice physically with the rest of the team.

“That’s just a testament to (the kids),” Bulldogs head Blane Gold said. “Coudersport beat us 150-20 in two games last year and then back to our playoff loss in 2018, but we felt confident with two things. I have a senior-lead defense, and when you defend the triple option (Coudersport offense), you have to play assignment football. So as long as they were mentally prepared, we were going to be OK.”

The Bulldogs kept the Falcons out of the end zone until they were up 28-0 early in the third quarter. Wagner replaced starter Gunner Mangiantini and threw TD passes in three straight possessions, a 15-yarder to Dalton Bish on fourth-and-13 at the 8:56 mark of the second quarter, a 31-yarder to Marquese Gardlock with 5:44 remaining in the half and then a 54-yarder to Trenten Rupp with 1:23 left before halftime.

The Falcons and Bulldogs traded end zone interceptions to start the game, a hint of what was to be an eight-turnover game with four committed by each team. Coudersport came up short on a chance to score at the end of the first half, but Hayden Keck’s pass to the end zone as time ran out fell incomplete.

On the first play of the second half, the Bulldogs pounced on a bad option pitch by Keck and after a scramble for the loose ball, the Bulldogs’ Joe Mansfield went 20 yards for the score and it was 28-0 13 seconds into the third quarter.

The Falcons scored on Brandt Kightlinger’s 4-yard run on the last play of the third quarter and Keck’s 21-yard TD pass to Kightlinger with 6:43 left in the game to set the final score.

Wagner completed 12 of 16 pass for 146 yards with his three TDs while Mangiantini completed 7 of 11 for 67 yards and an interception. Gardlock caught four passes for 70 yards.

The Bulldogs went nowhere on the ground as the Falcons limited them to 30 yards on 25 attempts.

Kightlinger ran for 120 yards on 27 carries and caught two passes for 21 yards, scoring both of the Falcons’ TDs. Keck completed 9 of 22 passes for 106 yards with two interceptions and the TD pass while rushing for 10 yards on 14 attempts.

Farrell Beats Northwestern, Sets up Round 3 With Wilmington In Class 2A Final
Big Plays Help Clearfield Win D9 3A Title
We use cookies on our website to give you the most relevant experience by remembering your preferences and repeat visits. By clicking “Accept All”, you consent to the use of ALL the cookies. However, you may visit "Cookie Settings" to provide a controlled consent.
Cookie SettingsAccept All
Manage consent