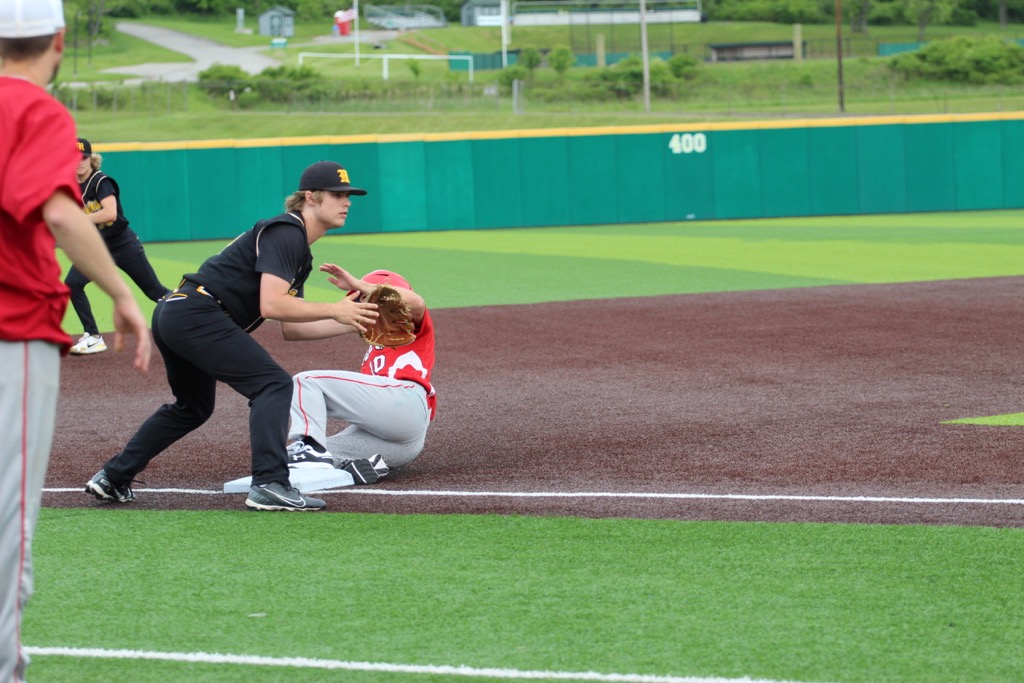 Ratkovich didn’t allow a walk, and his only blemishes came via three hit batters. He struck out seven, needing just 62 pitches, 49 of which went for strikes.

The Golden Eagles broke the game open with a seven-run third inning. Cord Pocza got the frame started with an RBI single, which was followed by an RBI single from Riley Mastkowski, a two-run single from Ratkovich, and finally a two-run double from Thomas Malvar.

With the win Kennedy advances to play No. 2 seed Rocky Grove on Friday.

SLIPPERY ROCK, Pa. – In a game that featured multiple rallies, it was Maplewood that delivered the final blow in a 9-7 quarterfinal win over Youngsville.

Trailing 7-6, the Tigers got a clutch two-out hit from Jesse McFadden, as his three-run, bases-clearing double made it 9-7.

After giving up a one-out single to Talon Mesel, Maplewood’s Ethan Peterson induced a groundout and a flyout to end the game.

Maplewood actually led 6-2, only to watch as Youngsville tied the game with four runs in the fifth, three of them coming on bases-loaded walks to Wyatt Dalrymple, Mesel, and James Johnson. The Eagles took a 7-6 lead in the top half of the sixth inning when Keegan Mesel came home on a wild pitch with two outs.

Peterson got the win, going the final 2 ⅔ innings, allowing one run on one hit, striking out one, and walking two.

Matt DeSimone had two of Youngsville’s seven hits and also scored a pair of runs.

New Champions Will Be Crowned in D10 SB as Cochranton, Saegertown Advance in 1A, Seneca, Reynolds in 2A
D9 1A SB Semifinals: Forest Area in D9 Title Game for First Time; Two-time Defending Champ DCC Wins Powered by North Washington Rodeo
This website or its third-party tools process personal data.In case of sale of your personal information, you may opt out by using the link Do not sell my personal information.
×
Manage consent