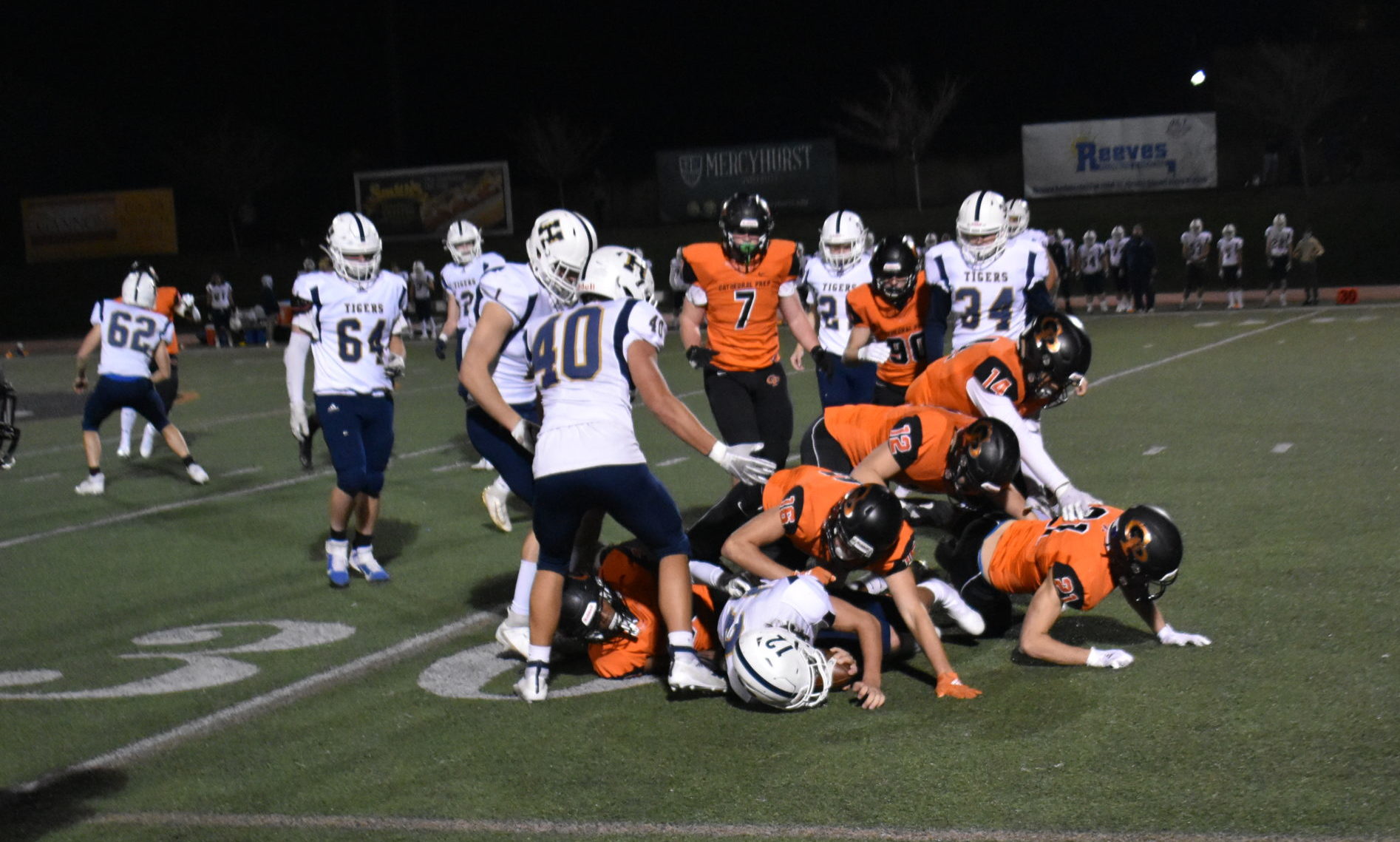 The Cathedral Prep Ramblers are making no apologies.

They would rather have played their way into the Class 5A state championship game (Friday, Hersheypark Stadium, 8 p.m.), but coach Mike Mischler feels his team would have made it to this point regardless.

“Obviously we would have liked to have earned our way to Hershey, but I do feel like, and I told the boys I think we would have gotten here,” Mischler said.

Prep beat Hollidaysburg in the first round before receiving forfeit victories against Wyoming Valley West and Upper Dublin.

In seeking the sixth state title in program history, they will have to overcome a prolific Pine-Richland team that is coming off a thrilling 48-44 win over Governor Mifflin.

In that game, the 10-0 Rams overcame a 22-point second half deficit, thanks in large part to the brilliant play of senior quarterback Cole Spencer.

Spencer, a University of Pennsylvania commit, threw for 252 yards and four touchdowns in the comeback win.

On the season, he has put up big numbers, completing 72 percent of his passes for 2,448 yards, 32 touchdowns and seven interceptions.

“Honestly reminds me a little bit of the (Shane) Stump kid from Thomas Jefferson,” Mischler stated. “We saw him (Stump) last year. He’s (Spencer) a tough kid, hangs in the pocket and throws the ball well.”

Perhaps the most amazing stat on Spencer, or rather his offensive line, is that he hasn’t been sacked all season.

“I mean, the fact that he hasn’t been sacked the entire season is amazing,” Mischler said. “That’s incredible. A couple years ago we only gave up two and I thought that would never be broken.”

“It’d be nice to at least get three. Obviously, he knows his offense. He gets the ball out, he’s got a very good offensive line and he’s got good blocking backs.”

He also has excellent receivers, led by Eli Jochem, who has 57 receptions on the season for 1,109 yards, and 17 touchdowns. In the win over GM, Jochem surpassed current Major Leaguer Neil Walker on P-R’s career receptions list. He had seven for 128 and a pair of scores in the semifinal victory as well.

With all of that being said, it’s important for Prep to control the ball on offense, but Mischler said the Ramblers need to be balanced.

“it’s incredibly important that we have a good mix,” said Mischler. “They have such a good front six or seven that it’s gonna be very difficult for us to rely just on the run. We’re going to have to hit some passes and push the ball down the field to have a chance to win.”

That starts with quarterback Tamar Sample, who has thrown for 585 yards and run for 435 more.

Michael Parks (865 yards, eight touchdowns) leads the ground game, which will also have the services of a healthy Jaheim Williams.

Williams, a Duquesne commit, also figures to have a huge impact on defense from his middle linebacker spot.

“Being a senior captain, just having his leadership and physicality back is huge,” Mischler said of Williams, who is one of several Ramblers to deal with ankle issues this season. “I just think his knowledge and his communication really is huge. He plays with passion. He’s a tough kid and one of our strongest kids. We have smaller, quicker linebackers on the outside, and having him back in the middle allows us to do some different things.”

“I was hoping there were going to be 40 mile per hour winds and a blizzard,” Mischler joked about helping to slow down the Rams. “It’s supposed to be a perfect evening.”

And it could be the perfect evening for the Ramblers sixth state title as well.

Humble And Hungry: Wilmington Meets Southern Columbia Once Again For Class 2A State Title
PIAA Football Championships Preview Hub
This website or its third-party tools process personal data.In case of sale of your personal information, you may opt out by using the link Do not sell my personal information.
×
Manage consent