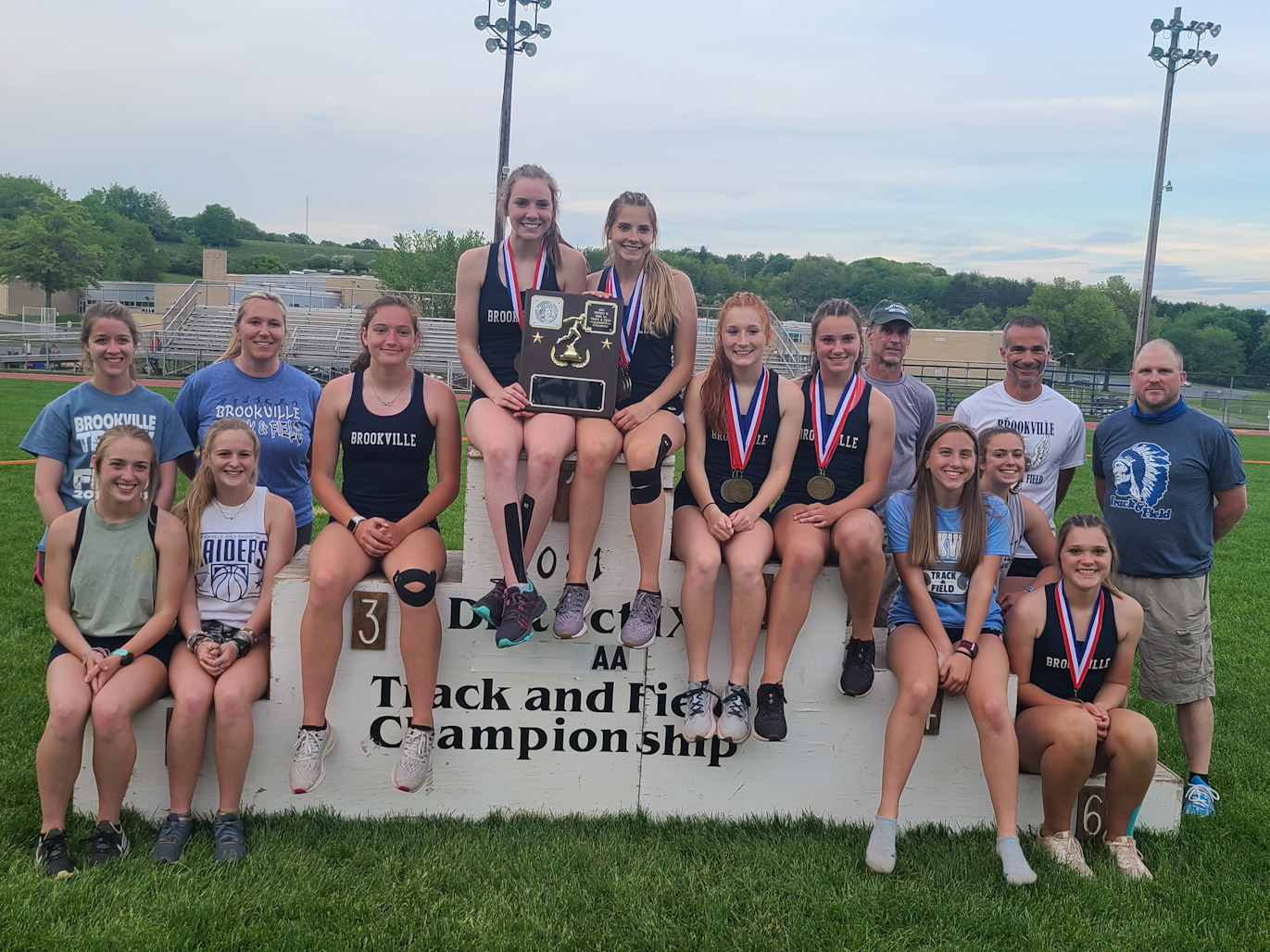 The Brookville girls won the District 9 Class 2A Track and Field championship on Friday.

BROOKVILLE, Pa. – It was a fantastic day to be a Brookville Raider.

The host school dominated the District 9 Class 2A track and field championships, with the boys outdistancing second-place Coudersport, 111.5-80, and the girls comfortably winning as well with 81 points, nearly 20 ahead of second-place Punxsutawney at 61.33.

The Brookville boys won the Class 2A championship.

They also swept the Jim Manners MVP awards, with Kyle MacBeth taking home the boys’ honors and Morgan Monnoyer on the girls’ side.

The title was the fourth in a row for the boys and the second straight for the girls.

“It was frustrating (not to compete last year),” MacBeth said. “Today we put it all together. Already on a day like today, you want to give it your all, but then you think about not having last year and there’s just all this build-up, it really does make a difference.”

MacBeth shined on both the track and the field, winning the 400 and javelin, and also was on the winning 4×100 relay team with Brayden Kunselman, Jack Krug, and Jace Miner. He was also on the 4×400 relay team that finished third.

Monnoyer, meanwhile, was a force in the sprints. She won the 100 and 200 and was also on the winning 4×100 and 4×400 relay teams. She was joined on the 4×100 team by Rylee Stancliffe, Julie Monnoyer, and Emily Martz and the 4×400 team with Sadie Shofestall, Stancliffe, and Martz.

“It feels really good,” Monnoyer said. “I was really nervous about all my events. There was definitely more competition than I thought there was going to be.”

Macbeth edged David Stamm of Moniteau 179-6 to 178-4 in the javelin and beat Dalton Keglovits of Coudersport, 51.17 to 51.74. Keglovits went on to win the pole vault by clearing 13-0, topping Kane’s Josh Greville, winning on fewer misses.

Monnoyer and MacBeth were brilliant, and there were others as well.

Johnsonburg’s Chloe Trumbull won the 100 hurdles (16.60) by nearly a full second over Stancliffe, who she again beat in the 300 hurdles for first.

Johnsonburg’s Chloe Trumbull shares an embrace after winning the 100 hurdles.

Foster cleared 5-2 in the high jump to win by two inches, while Henry cleared 9-0 in the pole vault and Newton uncorked a throw of 122-4 in the javelin to beat second-place Ashley Fox of Karns City by over four feet.

Back to the field, Clarion-Limestone junior Brooke Kessler won the long jump with a leap of 16-4 ¾, beating A-C Valley’s Baylee Blauser 15-7 ¾ , who was battling an injury.

Page went on to win the discus with a throw of 116-10, with Sheffield’s Emily Leichtenberger coming in second at 105-6.

Back to the boys, Macbeth’s teammate, Jack Krug was another standout performer.

Much like the girls’ side, the hurdles were a clean sweep, courtesy of Punxsutawney junior Tyler Elliott, who ran a time of 15.31 in the finals, with Brookville’s Ian Pete coming in second (15.90). In the 300s, he clocked in at 40.90, with Moniteau’s Alex Bell coming in second at 41.74.

Just like in the girls’ meet, it was a freshman who won the high jump, Union’s Hayden Smith, who cleared 6-4. Johnsonburg’s RJ Miller came in second at 6-3.

Cam Russell of Cranberry won the triple jump with an impressive leap of 44-8, with Smethport’s Ryli Burritt coming in second with a state-qualifying standard of 44-1.

Ayers came in second to Redbank Valley’s Cam Wagner in the discus, with both having throws that would make them contenders at the state championships next Friday. Wagner went 157-1 and Ayers 152-1.

The PIAA championships in Class 2A will all take place on one day, next Friday, May 28 at Shippensburg University, beginning at 9 a.m.