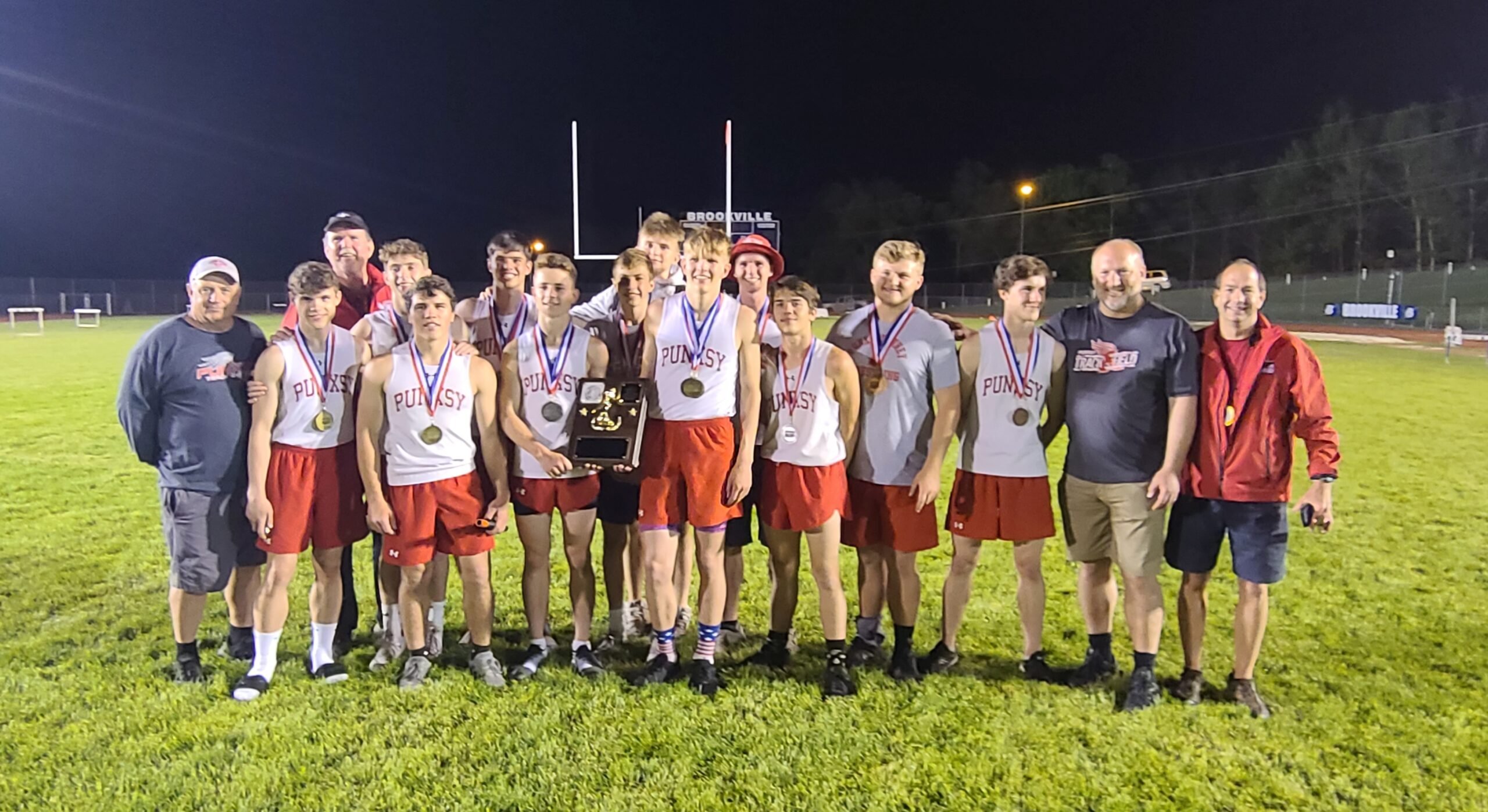 BROOKVILLE, Pa. – It came down to the last even for freshman Mylee Harmon and Redbank Valley.

In a meet that ran deep into the night, the Lady Bulldogs, trailing Punnxsutaweny by one point going into the 4×400 relay, raced past the Chucks on the final lap of the event to take home the Class 2A team title, joining the Punxsutawney boys as 2A team champions.

Harmon had a monster day to take home the Jim Manners Award as the top point-getter for the girls, winning the 200, 400, and high jump, with Brookville’s Ian Pete winning the award on the boys’ side.

“Standing over there getting ready to walk on the track, we got the news that we were one point off Punxsy for the title. That gave us a lot more confidence than we already had and gave us a little push.”

She teamed with Raegen Beamer, Ryleigh Smathers, and Alexandra Shoemaker to finish second, just behind the DCC team of Hope Jacob, Madelyn Schmader, Chloe Benden, and Faith Jacob and two spots ahead of Punxsy.

When it was all said and done, Redbank finished with 70 team points to 65.5 for Punxsutawney. Brookville, which had won back-to-back team titles, finished 10th in the standings.

VOTE FOR THE BEST PERFORMERS IN THE MEET REGARDLESS OF CLASSIFICATION

“It felt really good,” Harmon said about overtaking Punxsy late in the 4×4. “Especially knowing that in the back of my mind. It felt amazing.”

On the boys’ side, meanwhile, Punxsutawney got firsts from Tyler Elliott (110 hurdles) and Grant Miller (pole vault), getting balanced scoring across the board to win the team crown.

Smith and Wagner are top seeds in the meet with Wagner having a season-best throw of 169-feet, 5-inches, which is the third-best in 2A in Pennsylvania. He finished fourth in the state in the event a year ago.

The win by the Chucks ended Brookville’s streak of four consecutive titles.

The 4×100 team of Pete, Brayden Kunselman, Jack Pete, and Hunter Geer shaved a full second off their original PR to beat second-place Redbank Valley, which ran a time of 44.45.

“We pieced all four guys together and Hunter Geer was great on the last leg,” Pete said. “It’s like a brotherhood (relay teams).”

The Raiders 4×400 team consisted of Pete, Jack Gill, Cooper Shall, and Charlie Krug.

For the boys, Coudersport’s Kevin Sherry defended his titles in both the 1600 and 3200.

Johnsonburg’s Enoch Aboussou, meanwhile, unleashed a leap of 45-6 in the triple jump to narrowly set a meet record, breaking the old mark of 45-5 set by Brody Coleman of Keystone in 2019.

“Honestly that last jump didn’t feel like my best jump at all,” Aboussou said. “I just focused on my landing at the end and knew it had to be better than my last jump. I still feel like I can do a lot better.”

For the girls, Harmon shined in all her events, but perhaps none more so than the 400, where she turned in a personal best time of 58.73.

“I got the news that was the fifth-fastest time in the state, so I’m really looking forward to that at states,” Harmon said.

Elsewhere, it was redemption for Union/A-C Valley’s Baylee Blauser. She dealt with a nagging injury at last season’s district championships but was able to truly put her best foot forward this time around.

Punxsutawney’s Mary Grustky was yet another double winner, taking first in the discus (111-06) and shot put (132-3), winning both events by over four feet.

Additional winners on the girls’ side were ECC’s Grace Neubert in the 3200, Karns City’s 4×100 relay team of Ashley Fox, Natalie Hess, McKenna Martin, and Rossi McMillen, Redbank Valley’s Claire Henry defending her title in the pole vault, and Punxsy’s Rebekah Miller in the shot put.

The PIAA championships will take place next Friday (May 27) at Shippensburg University.

St. Marys Girls, DuBois Boys Claim D9 Class 3A Track and Field Titles Powered by Janney Montgomery Scott in Clarion
District 10 Track and Field Championships Will Feature Returning Champions, Young Stars Powered by Janney Montgomery Scott in Clarion
This website or its third-party tools process personal data.In case of sale of your personal information, you may opt out by using the link Do not sell my personal information.
×
Manage consent