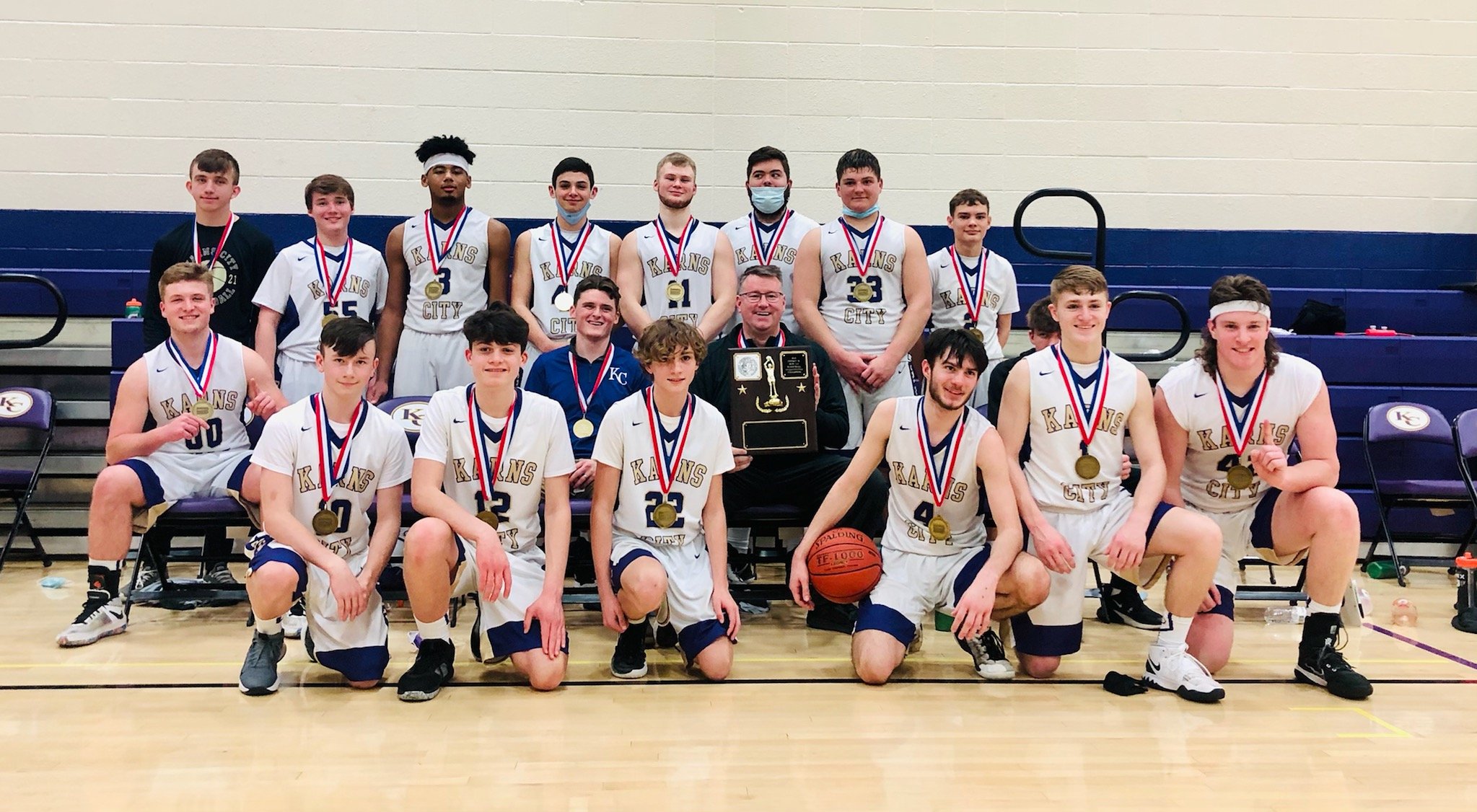 Karns City found itself trailing by 15 points in the first half of Saturday’s District 9 Class 2A championship game against Coudersport and 11 in the third quarter.

They responded as only champions do, going on a huge third-quarter run and then holding off a furious Falcons’ rally for a 67-65 victory to win their first D9 title since 2018.

The game came down to the final shot, literally, as Coudy star Hayden Keck was fouled shooting a 3 with 1.2 seconds remaining and the Falcons trailing 67-64. Keck calmly sank the first, which prompted a timeout from Karns City coach Chris Bellis.

Keck missed the second, forcing him to miss the third one intentionally to give the Falcons a tip-in chance.

It was to no avail, as the ball deflected out toward halfcourt and the celebration was on for the Gremlins (22-2)

It was a punch, counter-punch, a game truly worthy of a championship.

“Our kids really came together in the third quarter and played good basketball together,” said Bellis. “They did it with solid, fundamental man-to-man defense and we finally started getting in sync offensively and played together.”

The turning point may have actually come at the end of the first half, as a putback by Nathan Waltman made it a 9-point game at the half, 36-27, after Coudy (14-6) spent most of the second quarter leading by double-digits.

Coudersport led 42-31 after a Keck bucket at the 6:15 mark of the third quarter, but Karns City responded with the run of the game, an 18-4 spurt to close the frame that gave them a lead they didn’t relinquish.

“I have two seniors (Beighley and Waltman) who have been with me for four years,” Bellis said. “One of them’s the all-time leading scorer in school history. When you have two guys like that leading you … they did a good job of bringing guys together.”

It was also Waltman’s quarter, as the senior big man took over inside, scoring eight of his game-high 22 points in the period.

He talked about the game afterward:

Freshman Luke Cramer also showed poise beyond his years, scoring three big buckets as part of the third-quarter run. He finished with 13 points.

The lead swelled to seven in the fourth quarter, as Micah Rupp came up with three key shots, but Coudersport showed its championship pedigree as well.

Derek Easton and Brandt Kightlinger were big down the stretch, combining for 13 fourth-quarter points, and it was Christian Furman’s 3 that got the Falcons within 1, 65-64 with 10 seconds to go.

Beighley was fouled and made both free throws, setting up the frenetic finish.

Furman’s 3 was the only one of the second half for the Falcons, who made seven in the first half.

“We figured out our matchups a little better,” Bellis said. “We started the game in a zone and obviously that didn’t work. We went man but we didn’t have our matchups in sync. So we adjusted a few matchups at halftime and were able to play better man-to-man defense in the second half.”

It was all Falcons early, as they came out red hot from beyond the arc.

Kightlinger, who tied his season-high with 17 points, knocked down a pair in the first quarter, with Dalton Keglovits and Easton also hitting.

The Falcons led 22-12, at the end of the first as Keck also had six points in the first eight minutes.

The lead stretched to 15, 34-19, after an Easton 3 midway through the second quarter before the Gremlins closed to nine at the half.

“Just so proud of the kids and how they responded,” Bellis said.

With the win, the Gremlins advance to play District 5 champion Conemaugh Township on Wednesday in the first round of the PIAA playoffs.

Cathedral Prep’s Van Dee Wins Class 3A State Wrestling Title at 113 Pounds
Three is Sweet: Brookville Wins Third Straight District 9 Class 3A Title
We use cookies on our website to give you the most relevant experience by remembering your preferences and repeat visits. By clicking “Accept All”, you consent to the use of ALL the cookies. However, you may visit "Cookie Settings" to provide a controlled consent.
Cookie SettingsAccept All
Manage consent