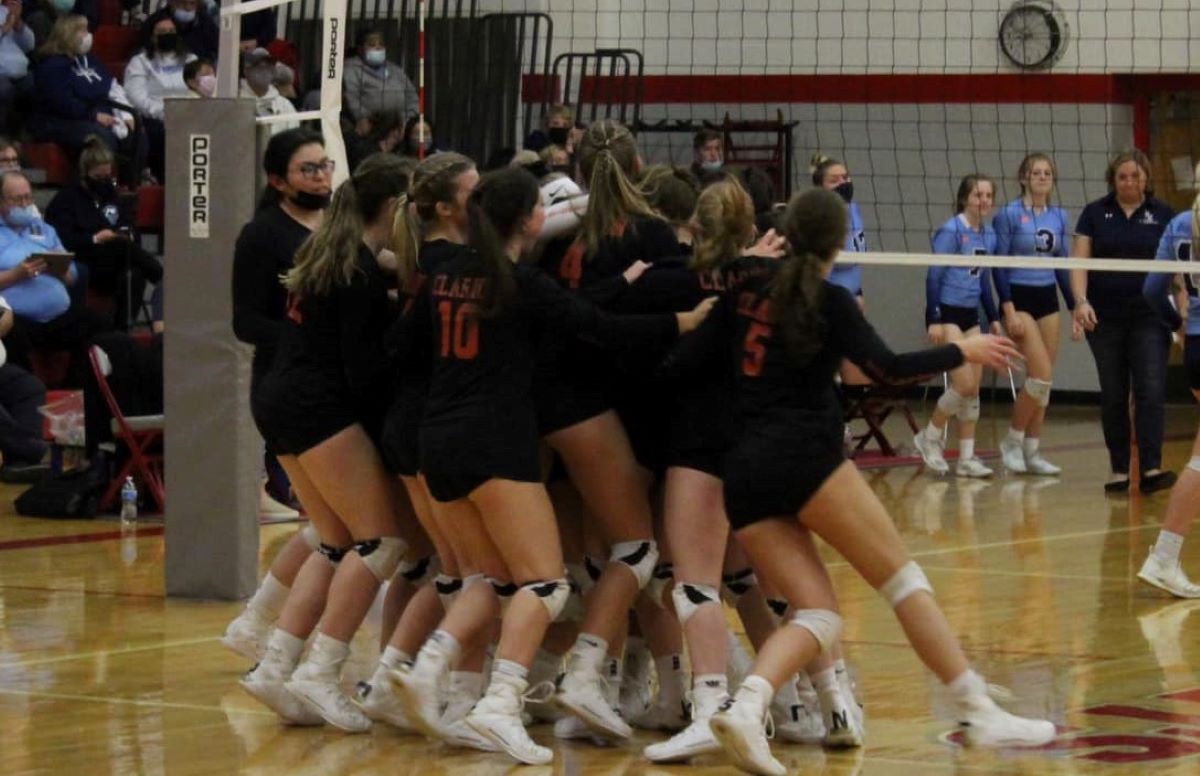 MECHANICSBURG, Pa. – This is it.

This is the reason for all the early morning workouts, the weekends at Club tournaments, the multiple-hour practices in a hot gym in August, the long bus rides on a Saturday morning to in-season tournaments.

It is all so you are ready for this moment.

The Lady Cats will get that opportunity at 10:30 a.m. Saturday at Cumberland Valley High School when they take on Sacred Heart Academy, the District 1 champion, in the PIAA Class 1A title match. The match can be heard right here at D9and10Sports.com. The broadcast can be accessed starting at 10:10 a.m. Saturday at this link.

And it is an opportunity that is becoming commonplace.

It is the fifth time Clarion has played for a state championship in the last 12 years winning in 2012 and again last year while being runners-up in 2010 and 2011.

It is a goal the team sets every year, according to head coach Shari Campbell.

“There is only one way to do things, and that is to be your best,” Campbell, who is in her 23rd season, said. “I have expectations teaching first graders, I have expectations coaching volleyball, I have expectations in my role as a school counselor, and as a parent. We don’t wake up to be mediocre. Winning is a byproduct of that mindset. Believe it or not, I am not the most competitive person in the whole scheme of it, but I love to hold kids accountable to those expectations. When they achieve it the confidence they gain and the ability to take on the next things and the next thing and the next thing is really why I coach. This is a byproduct of that and the kids hold each other to that standard. That is the atmosphere we have, and it is fun. They are proud of themselves and celebrate each other, and they are humble about it. I wouldn’t have it any other way.”

Clarion is trying to complete the rare feat of winning back-to-back PIAA titles without losing enough sets to lose even a single match in a season.

In winning the Class 1A title a year ago, the Lady Cats lost one set all season. This year, it is two sets, both at Warren on Sept. 20.

Since losing the second set against the Lady Dragons, Clarion has rolled off 48 straight set wins to run their season mark to 60-2 and its two-season set record to 129-3.

Korrin Burns was a big part of the victory.

The senior outside hitter, who is heading to NCAA D1 St. Francis (Pa.), recorded 33 kills and seven digs in the semifinal match and enters the title match averaging 6.0 kills and 2.3 digs per set while leading the team with 51 aces. She went over 1,600 career kills now standing at 1,611 while also surpassing 700 career digs with 702.

Burns has been even better in six playoff matches averaging 6.9 kills.

“When she is playing like this, it is definitely very difficult to beat us,” Campbell said. “She wants something and is going after it and demanding that she perform at that higher level. You just see her game getting better, and she is contacting the ball at such a high point.”

What separates Burns from many of the great hitters is how high she contacts the volleyball.

“Not all extremely talented players do that, high-point the ball,” Campbell said. “When a player can do that consistently, it changes the trajectory and delivery of the ball, and it is very tough to dig.”

In order for Burns to be able to high-point the ball, though, two other things have to work well for Clarion – the pass and the set.

And more often than not they do because of players like senior Libero Jordan Best and senior setter Noel Anthony, who is in her first year as the starting setter.

“When you go to coaching clinics, the two most important positions they talk about are Libero and setter,” Campbell said. “I think you have to find athletes who are athletic, smart, and competitive who have the skill set of what a Libero and a setter do. When you are getting a lot of ball control from those kids, that allows someone who is super explosive to take a swing in a very aggressive way. When our hitters can predict over and over again where the ball is going to be, they can go hard. You see acceleration, not deceleration. That is a huge piece of it.”

Best is in her second season as the starting Libero and ranks second on the team with 2.0 digs per set (189 total digs).

“A lot of high-level coaches say one of the most important decisions is who you put in that shirt,” Campbell said. “You need some to have a lot of ball control and be humble about it. You need a kid who wants to make that amazing save. That is the characteristic of Clarion Liberos. These kids have grown up watching the ones who came before them. Jordy has known from early on what that Libero mindset is. She gravitated towards it because she loves to be pretty bold and gutsy and make that hustle play. It matches her personality so well.”

Anthony was asked to replace one of the best setters Clarion has ever had if not the best in Campbell’s daughter Brenna.

And Anthony has embraced the challenge to the tune of 9.3 set assists per (881) nearly matching her predecessor’s output from a year ago (9.8 per set).

“She is a very fast learner,” Campbell said. “She is super smart off the court and on the court. She is a three-sport athlete who knows how to compete and work hard. She has done beyond what is expected to be able to step in. She wants so badly to be the person running the show, running our offense, and reaching our goals. I am proud of the work she has put in.”

The Lady Cats have a strong No. 2 outside hitter in junior Aryanna Girvan, an experienced player at right-side hitter in Payton Simko, and two young but constantly improving middle hitters in junior Adia Needham and sophomore Taylor Alston.

Simko, who was a middle hitter on last year’s title-winning squad, has also upped her play in the postseason averaging 1.7 kills per set in six postseason matches with four of those matches seeing her record at least six kills. On the season, she averages 1.5 kills per set.

Needham (51 kills, 30 blocks) and Alston (44 kills, 24 blocks) are one and two on the team in blocks and have embraced their roles as changeup-type offensive players.

Accepting roles has been a key to the Lady Cats’ success, according to Campbell.

“It is huge to realize it is (about) what the team achieves,” Campbell said. “You don’t have to be perfect. You have to play your strengths and be 90 to 92 percent accurate and then the team can be perfect. Give what you have got from where you are playing. These kids love the game and will play anywhere.”

Clarion’s opponent, Sacred Heart, doesn’t have a hitter like Burns but what the Lions do have is a balanced attack.

Emily McKenna is the team leader in kills with 2.7 per set and is one of four players averaging at least a kill a set.

Elizabeth Cuskey adds 1.8 per set with Aly Albanese chipping in 1.5 per set and Lillianna Hornickle 1.2 per set.

“They have a well-rounded offense,” Campbell said. “They have an outside hitter and two middle who we will pay attention to.”

What Campbell and the LadyCats can’t pay attention to is that based on its stats Sacred Heart Academy needs teams to make mistakes in order for it to score.

Compare that to Clarion’s 10.9 kills per set and .239 hitting percentage and the Lady Cats average nearly two more points earned off kills per set than Sacred Heart and are much more efficient with their attack.

But the Lions make up for some of that in serving where they average 4.1 aces per set through the end of the District 1 playoffs led by 68 from Cuskey, 63 from Albanese, 55 from Macie Moresco, and 51 from McKenna.

The 4.1 aces per set are a full ace more per set than Clarion averages.

The Sacred Heart defense is paced by Bella O’Toole’s 2.8 digs per set with Cuskey and Albanese averaging 2.7 per set.

NOTES – Tickets must be bought online at PIAA.org. They are $8 plus a handling fee. No tickets will be sold at the door … Northern Cambria (2018 and 2019), Reading Central Catholic (2006 and 2007), and Farrell (2001 and 2002) are the only back-to-back champions in Class 1A since the PIAA expanded to a three-classification system to include Class 1A in 2000 (it expanded further to a four-class system in 2016) … Since the expansion to include Class 1A in 2000, only Marian Catholic (7 times) and Northern Cambria (6 times) have been to the Class 1A championship match more times than Clarion … A Lady Cat win Saturday would give Clarion the second-most Class 1A titles in PIAA history with three behind only Northern Cambria’s four (2005, 2009, 2018, 2019). Currently, the Lady Cats are tied with five other teams with two titles … Sacred Heart is making its first-ever appearance in a PIAA title match … A team from the eastern half of Pennsylvania hasn’t won a PIAA Class 1A volleyball title since Marian Catholic defeated Cochranton, 3-0, in 2013. In fact, a team east of Altoona hasn’t even won a set in Class 1A since 2014 when Marian Catholic took the fourth set from Greensburg Central Catholic only to lose the fifth set. Here is an all-time list of champions … Campbell is 425-64 in her 23 years at Clarion with two PIAA titles, 15 District 9 titles, and 19 KSAC crowns. The Lady Cats have won 15 or more games 20 times under Campbell and have now won 20 or more games 11 times … Clarion is looking for its third unbeaten season in school history, all under Campbell with the two states titles (2012 and 2020) being the first two.

It’s a PIAA Volleyball Final so there must be a Burns (or Two) Involved
D9and10sports.com to Audio Broadcast Clarion v. Sacred Heart in PIAA 1A Volleyball Title Game
This website or its third-party tools process personal data.In case of sale of your personal information, you may opt out by using the link Do not sell my personal information.
×
Manage consent