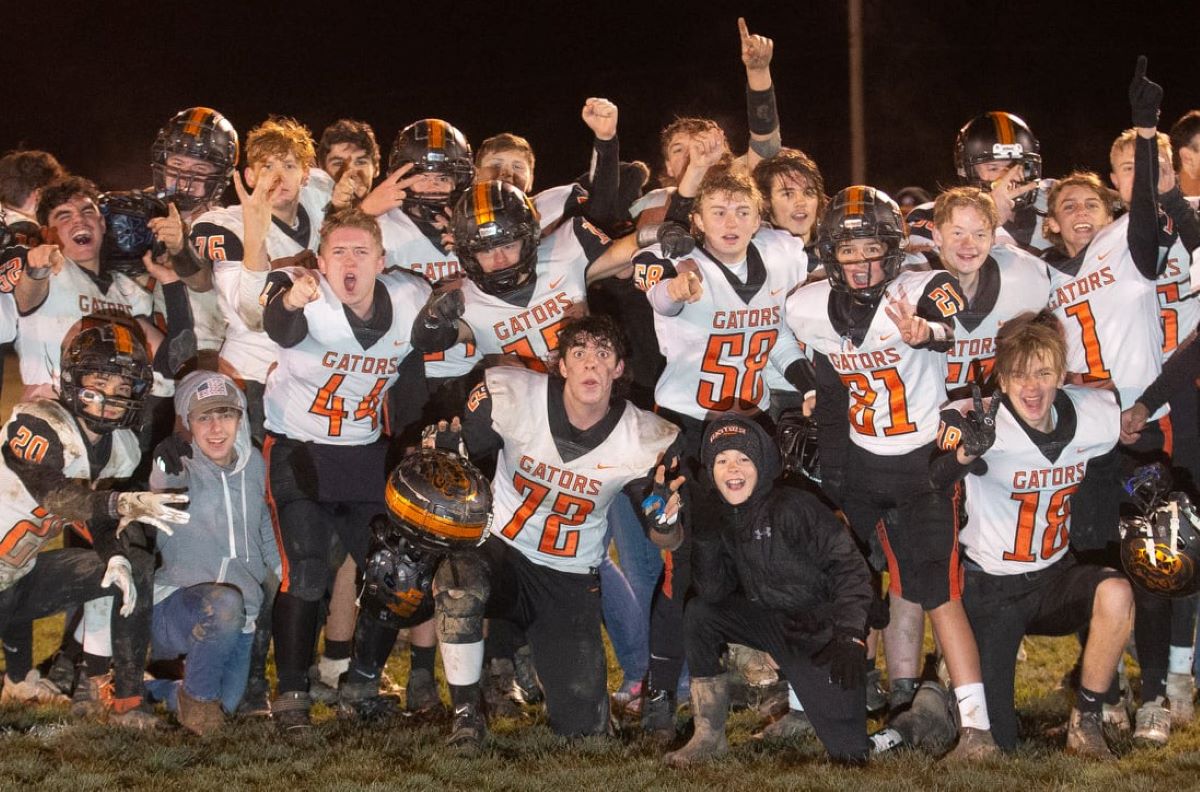 KNOX, Pa. – Drew Evens ran for a pair of short first-half touchdowns, and Port Allegany’s defense did the rest in a 14-12 Gators’ win at Keystone in the District 9 Class 1A quarterfinals Friday night.

Keystone had a chance to tie the game with a 2-point conversion following a 9-yard Bret Wingard to Zander McHenry touchdown pass with 1:15 left in the fourth quarter, but the 2-point pass to McHenry was no good leaving Port Allegany up two.

The fourth-seeded Panthers, with only one time out left, were forced to try the onside kick.

All of Port Allegany’s points came in the first half with Evens scoring on a 3-yard run midway through the first quarter to give the Gators an 8-0 lead and then on a 1-yard run on fourth-and-goal on the final play of the half to put Port Allegany ahead 14-6 at halftime.

The 1-yard run completed a 13-play, 84-yard drive for Port Allegany that ate up the final 6:36 of the first half. On the drive, the Gators finished off a pair of short fourth-down conversions, while the big play was a 32-yard run by Noah Archer on a third-and9 from his own 44-yard line that moved the ball to the Keystone 24.

Archer was a big part of the Port Allegany offense rushing for a game-high 97 yards on 16 carries, while Blaine Moses, who picked up the other fourth-down conversion on the drive to end the first half, added 96 yards on 32 carries.

Without the football, Keystone had trouble mustering much offense and finished the night with just 164 yards total, including only 34 on the ground on 17 carries. The Panthers ran just 33 plays compared to 60 for Port Allegany.

Keystone did get within two, 8-6, late in the first half when Wingard and McHenry hooked up on a 51-yard touchdown pass. But Wingard’s 2-point conversion pass was no good.

RIMERSBURG, Pa. – After losing its first three playoff games since the cooperative agreement began between the two schools in 2015, it was time for that drought to end as Union/A-C Valley advanced to the District 9 Class 1A semifinals with a 31-6 win over Cameron County at Vidunas Stadium.

Seventh-seeded Cameron County scored on the opening drive of the game when Dylan Reider raced 20 yards to the end zone to cap the opening drive that netted the Red Raiders (5-5) 57 offensive yards. After that, they managed just 70 yards on 37 plays the rest of the game.

The win put the Falcon Knights in next week’s semifinal round at home against Smethport, which advanced with its win over Curwensville. That game will also be played at Union at a time to be announced.

Five different Falcon Knights found the end zone as quarterback Bailey Crissman threw two touchdown passes to Ryan Cooper covering 14 yards and Dawson Camper for 20 yards both in the first half as Union/ACV led 24-6 by halftime.

Mikey Card, Andrew Verostek and Brody Dittman ran for TDs, Card and Verostek in the first half and Dittman’s on a 1-yard run for the game’s only points in the second half. Card ran for 50 yards on 16 carries while Crissman completed 8 of 18 passes for 155 yards. Caden Rainey caught three passes for 63 yards.

Union/ACV scored twice off Cameron County special teams flubs within a span of less than three minutes to take the lead for good early in the second quarter. A poor punt snap wound up giving the Falcon Knights the ball at the Cameron 13 and three plays later, Crissman hit Cooper for their 14-yard TD.

The ensuing kickoff was fumbled away by Cameron County, giving the Falcon Knights the ball near midfield and although they didn’t score, their punt turned into another Red Raiders turnover when the ball hit a player with the Falcon Knights recovering at the 3. Three plays later, Verostek ran one in from five yards out.

Two Falcon Knights scores in the final 1:11 of the first half essentially put the game away. Card blasted 28 yards at the 1:11 mark and then Skyler Roxbury’s interception near midfield with 40.9 seconds left gave them enough time for Crissman to throw a 20-yard TD pass to Camper with 21.1 seconds before halftime.

Cameron was playing without its leading rusher Lathan Reed. Reider, who ran for 81 yards on 15 carries, had just two carries in the second half because of an injury and played just briefly after halftime.

DuBOIS, Pa. – Tarrell Allen-Tooks ran for a 7-yard touchdown and Paul Helvy’s two-point conversion run with 3:20 left in the game lifted visiting University Prep to a 14-13 win over DuBois in a District 6-8-9 Sub-Regional semifinal game at E.J. Mansell Stadium.

The Beavers came oh, so close to nailing down their first playoff win since 1996 when they drove to the Prep 3, but on second-and-two, a bad snap lost 15 yards and the Beavers eventually settled on what could’ve been a game-sealing 28-yard field goal. But Prep blocked Charlie Harmon’s kick, setting up the game-winning drive from its own 13 with 6:38 left on the clock.

Following Prep’s touchdown, the Beavers’ Cam-Ron Hays threw an interception on the ensuing drive and Prep (3-5) was able to kneel out the clock and advance to next week’s sub-regional final against either Bellefonte or Juniata. Those two play Saturday at Mansion Park in Altoona starting at 6 p.m.

DuBois took the first lead at 6-0 when Hays dashed 20 yards up the middle on a draw play with 3:01 left in the second quarter. The point-after kick was missed.

Prep advanced to the DuBois 4 just before halftime, but time ran out on its shot to score when an illegal formation penalty on a spiked pass only briefly stopped a running clock with 1.5 seconds left and it wasn’t able to get a play off before halftime.

Just over a minute into the second half, however, Prep’s Keon Smalls hit Daniel Cain for a 24-yard TD pass on the opening drive of the third quarter. Prep’s failed two-point conversion pass kept the score at 6-6.

The Beavers answered that score with one of their own on the following drive when Hays connected with Austin Mitchell for a 39-yard TD pass on a third-and-eight play with 8:50 left in the third and it was 13-6 after Harmon’s point-after kick, setting up the fourth-quarter scramble.

Nov. 5, 2021 D10 Playoff FB: Prep Rolls in 5A Subregional; Wilmington, Farrell Advance to Class 2A Final
Wagner Scores 6 TDs to Lead Reynolds Back to D10 Class 1A Title Game
We use cookies on our website to give you the most relevant experience by remembering your preferences and repeat visits. By clicking “Accept All”, you consent to the use of ALL the cookies. However, you may visit "Cookie Settings" to provide a controlled consent.
Cookie SettingsAccept All
Manage consent