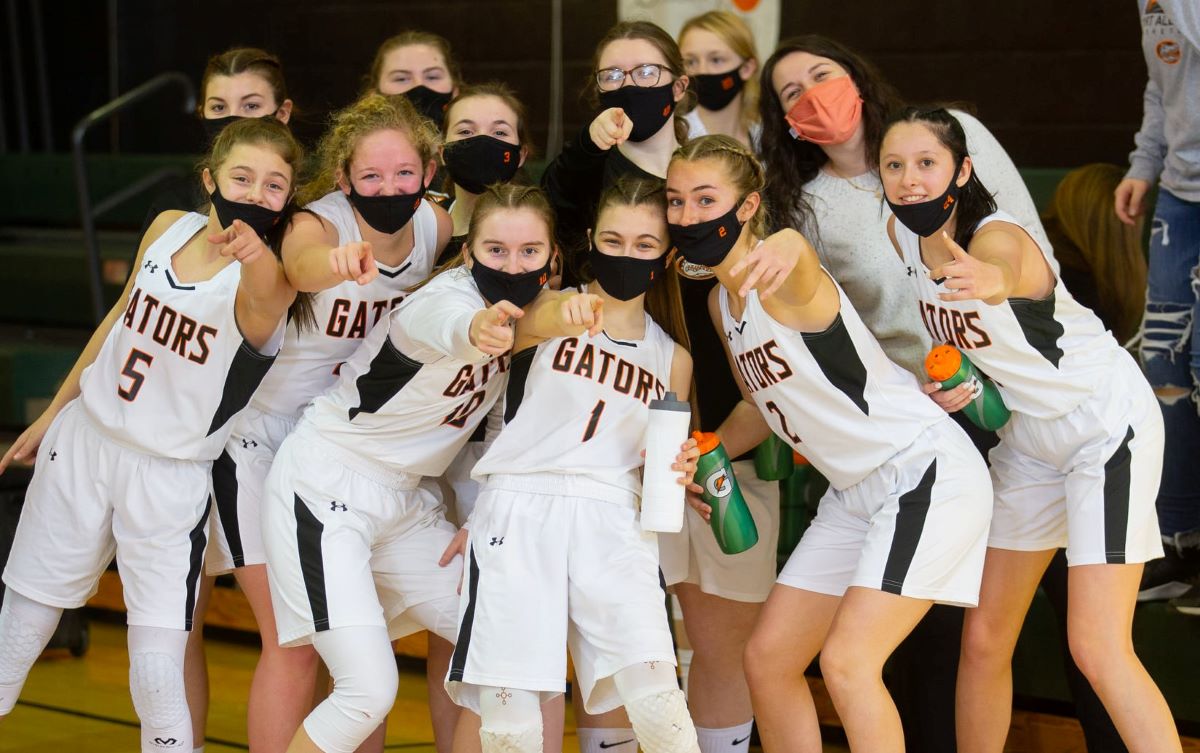 PORT ALLEGANY, Pa. – Trailing by 10 halfway through the third quarter, it was looking like a third straight playoff disappointment for the Port Allegany Lady Gators.

But then the fourth-seed turned up the defensive intensity, got a couple of big shots from Evin Stauffer and finally let District 9’s leading scorer Bree Garzel take over on its way to a come-from-behind 45-39 win over fifth-seeded and visiting Clarion in the District 9 Class 1A quarterfinals Thursday night.

“It means a lot to me personally and to us as a team,” Garzel, the Lady Gators 1,000-point senior, said. “We have not won a playoff game (in her career). We have gone to the playoffs, but have not won a playoff game until today. It’s a really big deal, especially being my senior year. Some of these girls have never experienced going to the playoffs, so it is a big deal for them, and it’s just a good experience overall.”

It was Port Allegany’s first postseason win since the District 9 Class 2A quarterfinals in 2017. The Lady Gators had lost four straight postseason games, including last year to Clarion.

Clarion (11-10) led 28-18 following an old-school 3-point play by Erica Selfridge just under two minutes into the second half, and the lead was still that way when Clarion got possession of the basketball with just over four minutes left in the third quarter.

The run featured 3-pointers by Stauffer, Garzel – who hit her first shot of the game with 2:27 left in the third quarter – and Gracie Archer. Archer’s triple gave Port Allegany’s its first lead since the first half, 29-28.

“We made some shots,” Port Allegany head coach Jamie Evens said. “Really, it is as simple as that. The first half, I thought we were getting good looks. We had shots we typically make, and they just weren’t falling. Hats off to Clarion. They did a great job denying Bree the ball, denying her penetration. The other girls stepped up, and they finally started dropping.”

Finding its self down, Clarion didn’t blink scoring the next four points, all from Noel Anthony, whose 3-pointer with 20.4 seconds left in the quarter gave the Lady Cats a 32-29 lead.

Garzel, though, tied the game with 16.9 seconds left when she was fouled by Taylor Alston taking a 3-pointer and hit all three charity shots. The contact was minimal, if at all, but Garzel was able to draw the call and get the game tied at 32 going to the fourth quarter.

Clarion scored the first four points of the fourth quarter to go ahead, 36-32, but again it was Archer who answered the bell with a 3-pointer at the 3:35 mark to get Port Allegany within one.

Stauffer and Archer both played key roles with the long ball, as Clarion held Garzel to just two made baskets in the game – although the senior did score 20 points thanks to a 14 of 15 performance from the free-throw line.

A 3-pointer shooting team for sure. The Lady Gators made 11 shots on the night, nine of them 3-pointers for 27 of their 45 points. Fourteen additional points, all from Garzel, came from the charity stripe accounting for all but four of the 45 tallies.

Anthony had two chances – first with an open three and then with the follow-up layup in an empty lane – to add to its lead. But both shots missed, and Archer got the rebound, handed it to Garzel who raced up the court, did a jump stop, and nailed a 3-pointer to put Port Allegany in the lead, 38-36, with 3:10 to play.

Two Anthony free throws following an offensive rebound by the junior retied the game at 38 with 2:33 to go.

The entire complexion of the game then changed over the next 12 seconds.

First, Garzel was fouled by Anthony with 2:27 to go. It was Anthony’s fifth foul, fouling her out of the game.

Garzel hit the first free throw but missed the second one giving Port Allegany the lead for good, 39-38.

The rebound, however, was grabbed by Kayleigha Dowell, and she passes to Garzel who drew another foul, this one on Selfridge. It was Selfridge’s fifth, fouling the senior out of the game.

“We knew they were in foul trouble early,” Evens said. “It was a conscious effort to go after them. Really, unfortunately for them, they are their two best ball handlers, too. That took a little bit of pressure off our defense to be able to pressure them a little bit more and not worry so much about getting beat to the hoop.

The senior proceeded to hit four more free throws over the next couple of minutes to seal the win.

In addition to her 20 points, Garzel added nine rebounds, two assists, and two steals. She scored 16 of her points after halftime.

“I think a lot of that has to do with my coach,” Garzel said of her second-half scoring performance. “At halftime, I was down. I wasn’t scoring. I wasn’t putting out like I should. My coach came in, he told me what I needed to do. He told me I needed to get to the foul line. That is just what I did. I know that foul shots are my spot to be. I got to the foul line. That is how I got my points.”

The victory avenged the loss by Port Allegany to Clarion in the District 9 Class 2A quarterfinals a year ago. Both teams moved down a classification this season but met again.

“Definitely a lot better (feeling than last year),” Evens said. “We took care of the ball in the second half. We didn’t change anything at halftime. We just talked about executing our game plan we came in with. I didn’t think we did a very good job the first half of executing that. The second half, the girls really picked it up and did what they needed to do.”

Port Allegany will travel to Coudersport for a 6 p.m. semifinal game Saturday, March 13.

Wire-to-Wire: Falcons Fly Past Keystone, Into D9 Class 2A Title Game
Cameron Co.’s Bresslin Scores 1,000th Point in Playoff Loss to ECC; Otto-Eldred Girls Roll Past Union
We use cookies on our website to give you the most relevant experience by remembering your preferences and repeat visits. By clicking “Accept All”, you consent to the use of ALL the cookies. However, you may visit "Cookie Settings" to provide a controlled consent.
Cookie SettingsAccept All
Manage consent