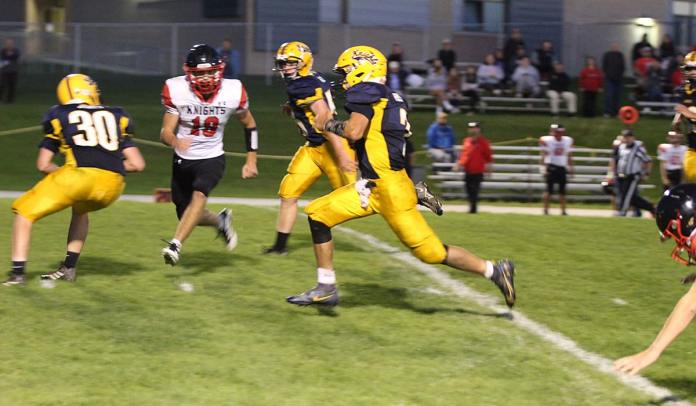 The District 10 football playoffs have arrived.

Well, at least in Class 1A. A trio of games dot the Class 1A quarterfinal schedule on Friday, as Eisenhower battles Saegertown, Reynolds plays Cambridge Springs and Mercer squares off with Maplewood.

Class 1A is the only classification that begins its playoff trek this week. Many teams opted for a Week 10 games, while others chose to take a bye week before the season and still a few others saw their seasons come to a close altogether.

Behold Week 10 – playoff edition. All of the playoff games are 7 p.m. kickoffs.

These two teams met in the season opener, a 14-0 win for Eisenhower. A lot has changed since then, as is the case in any season. Included in Eisenhower’s wins this season are a pair of shutouts, as they also blanked Cambridge Springs by an identical 14-0 score and are coming off a 15-7 win over Maplewood. The defense has led the way.

Offensively, Shawn Pascuzzi stepped in mid-season for an injured Garrett Jensen and has thrown for 255 yards and run for 316 more. The offensive line has paved the way for backs Benji Bauer (779 yards, 9 touchdowns) and Keegan Eckstrom (546 yards, 6 touchdowns). Wyatt Lookenhouse is the big-play threat in the passing game.

The Knights are coming off an appearance in the D10 title game a year ago. Saegertown, meanwhile, has resurrected its program. They own wins over Union City and Seneca, scoring 35 and 26 points in those games, respectively. The Panthers will move the ball primarily on the ground, with three players – Keenen Schaaf, Zach Yoder and Aaron Sharte accounting for over 300 yards rushing each this season.

The winner will move on to face the Reynolds-Cambridge Springs victor in the semifinals.

The defending District 10 champion Reynolds Raiders held their own in the ultra-competitive Region 1 this season. They own wins over Kennedy Catholic, Mercer, Saegertown and Lakeview, while dropping contests to Wilmington, Conneaut (Ohio), Greenville and Sharpsville.

When the Raiders are going right, they are getting things done offensively on the ground. Jalen Wagner has put together a terrific season, rushing for 1,211 yards and 16 touchdowns, averaging 10.4 yards per carry. They will put the ball in the air, with Brayden McCloskey throwing for 540 yards, 236 of which went to Haydin McLaughlin.

They will be facing a Cambridge Springs team that fought through a COVID-19 stoppage and is coming in playing perhaps its best football of the season, coming off back-to-back wins over Saegertown and Union City. Garrett Hodak moved from the offensive line and has put together a strong season, rushing for 212 yards and seven touchdowns, while Van Jones 439 yards and four scores on the ground. Morgan Applebee has stepped in at quarterback and tossed for 237 yards, with Ethan Counasse (108 yards) the leading receiver.

Two teams that when they win, they get it done on the defensive end. Mercer has navigated a tough Region 1 schedule, while Maplewood battled through the Region 2 slate. They did meet back on Sept. 24, a 21-7 win for Mercer.

The Mustangs allowed just 29 points in their three wins this season. Logan Turton is a dual-threat for Mercer, rushing for 233 yards and four scores and adding another five scores and 217 yards receiving. Ethan Wiley has thrown for 419 yards and six touchdowns. Jake Badger is the leading rusher for the Mustangs with 441 yards and a pair of scores.

Maplewood, meanwhile, allowed just 22 points in its four wins. Ben Gilberto has rushed for 618 yards and six touchdowns on the season. Dominick Kinney has thrown for 284 yards and a pair of scores, both of which have gone to Connor Palmiero.

A battle for the right to play McDowell in the Class 6A title game. Erie is coming off its best offensive output of the season in a 48-14 win over Oil City. The Royals have been primarily a running team this season, with Jermaine Selby, Adrien Tate and Kree Thompson leading the way. When they do look to the air, Division I prospect Marquell Darnell is the top target, accounting for four touchdowns this season.

Butler is also coming off its high-point total of the season in a 60-8 win over Franklin. The Golden Tornado can win on the ground and through the air. Mac Schnur has thrown for 1,119 yards and seven touchdowns, four of which have gone to Ethan Trettel (512 yards receiving). On the ground, Cooper Baxter has rushed for 352 yards and six scores.

Farrell has struggled to find opponents on its open dates this season, but the Bison stepped up to the plate in Week 10, creating a showdown before both teams enter their respective playoff fields, Farrell in Class 2A and LeBoeuf in Class 3A.

The Steelers have put together a truly special season, shutting out four of their six opponents and outscoring them by a total of 354-14. The numbers are truly staggering. Anthony Stallworth has rushed for 1,095 yards and 16 touchdowns, averaging 15.6 ypc. Kabron Smith and Trian Holden have combined to throw for 648 yards, with Kylon Wilson (369 yards, 8 touchdowns) and Omar Stewart Jr. (195 yards, 5 touchdowns) the leading receivers. Linebacker Taidon Strickland leads the team in tackles.

LeBoeuf does all its work on the ground, and Tristin Harris boasts equally impressive numbers, rushing fr 959 yards and 15 touchdowns, averaging 16.3 yards per carry. Justin Leuschen and Adam Lichtinger have combined for 15 more scores on the ground. Defensively, the Bison have yielded single-digit points in four of their wins, including a shutout of Girard.

McDowell bounced back from its first loss of the season with a 62-0 win over Conneaut last week, their second shutout of the season Artis Simmons and Christian Santiago lead the ground game with 10 touchdowns each, while Ben Moore has thrown for nine scores to six different receivers.

Ricardo Kidd has rushed for 810 yards and seven touchdowns for St. Francis, which lost to Cathedral Prep (28-20) and beat Erie (28-0) this season.

The Dragons have one final tune-up before the Class 4A playoffs when they host Corry. Warren is coming off a 22-7 loss in the mud to unbeaten Northwestern last Saturday. Eric Dippold has stepped in nicely at quarterback for Warren, tossing for 13 touchdowns, with eight of those going to Ben White, whose 619 yards ranks among the best in District 10. Tommy Nyquist (585 yards, five touchdowns) has led the ground game for the Dragons.

Corry is coming off a 45-7 loss to Hickory. Nathan Lesher has thrown for 426 yards and run for 160 more for the Beavers.

Girard is coming off a 56-13 loss to Slippery Rock. Gunner Bax and Zach Lowe have scored three rushing touchdowns each for the Yellow Jackets.

Fairview will enter the Class 3A playoffs, but not before a battle with Seneca. The Tigers began the season 4-0 before back-to-back losses, but have rebounded with wins over Mercyhurst Prep and Titusville. Jared Gennuso is on the brink of a 1,000-yard season and has 17 touchdowns on the season, while Logan Frazao has caught five touchdowns from Tyler Corbin.

Seneca snapped a lengthy losing streak with a victory over Iroquois back on Sept. 24. They also own a 16-6 win over Union City last week. Nolan Seabury has proved to be a true dual-threat, combining for over 1,400 yards passing and rushing with eight total touchdowns. His top target is Collin Libra, who owns a pair of receiving touchdowns.

North East has shown an ability to put up points this season, but was blanked last week by Sharon, 35-0. Tyler Wittman and Casey Burch both have over 600 yards on the ground this season and have combined for 14 touchdowns.

Iroquois is looking to bounce back from a 60-8 loss to Northwestern. Michael Hoopsick has accounted for 700 yards rushing and seven touchdowns for the Braves.

As the only Class 5A entry in D10, Cathedral Prep knows it will begin its playoff run with a sub-regional game against Brashear. Until then, however, they are set to do battle with Canisius. Wakeem Page went viral last week with his ‘interception’ return against Meadville, and is one of many big-play threats for the Ramblers. Carter Barnes has a 15-2 touchdown to interception ratio, with DeMario Crawford, Tyson Simon and Page his top targets. Mike Parks has put together a 1,000-yard rushing season and nine touchdowns, while Barnes has 11 scores on the ground.

Canisius is coming off a 20-14 win over Erie last week. Tyler Baker has thrown for 1,379 yards and 12 touchdowns on the season.

The co-op between Sharpsville and West Middlesex has been a rousing success this season. The only downfall is that the Blue Devils aren’t allowed to enter the playoffs this season because of it. Mercyhurst Prep stepped up to the plate, giving both teams one final game this season.

Sharpsville has won three-straight, allowing just 13 points in those three games. Ian Smith leads a talented defensive group and has also rushed for 346 yards and five scores. Chris Roth has rushed for 802 yards and six scores for the Blue Devils, with Zack Tedrow accounting for three scores on the ground. Caullin Summers and Garen Levis have formed a strong connection this season as well, combining for eight touchdowns.

Mercyhurst Prep’s David Bahm has put together a strong season, combining for 14 touchdowns passing and rushing. His top target is Dewey Byrd, who has three scores. The Lakers are coming off a 38-14 loss to Fairview.

Lakeivew is coming off a 40-8 loss to General McLane, while Franklin dropped a 60-8 decision to Butler. Gavin Murdock has rushed for 546 yards and passed for 915 for the Sailors, accounting for 14 total touchdowns. Mitchell Tingley (270 yards, 2 touchdowns) and Calagano Wilkins (230 yards, 3 touchdowns) are his top receivers.

Carson Wible has rushed for close to 500 yards for Franklin this season.

Kennedy Catholic is looking to bounce back from a loss to Farrell. Rayvion Wilbon-Venable has thrown for 887 yards and eight touchdowns this season, forming a strong connection with Simeir Wade (483 yards receiving, four touchdowns). Blaze Campbell also has four receiving touchdowns.

Garrett Knapp has thrown for nine touchdowns for Titusville this season, four to Brock Covell and three to Antonio Malave, who both have over 300 yards receiving.

You Pick The Winner of Select Football Games in Week Ten 2021
Wrapping it up: D9’s final week of regular season
We use cookies on our website to give you the most relevant experience by remembering your preferences and repeat visits. By clicking “Accept All”, you consent to the use of ALL the cookies. However, you may visit "Cookie Settings" to provide a controlled consent.
Cookie SettingsAccept All
Manage consent