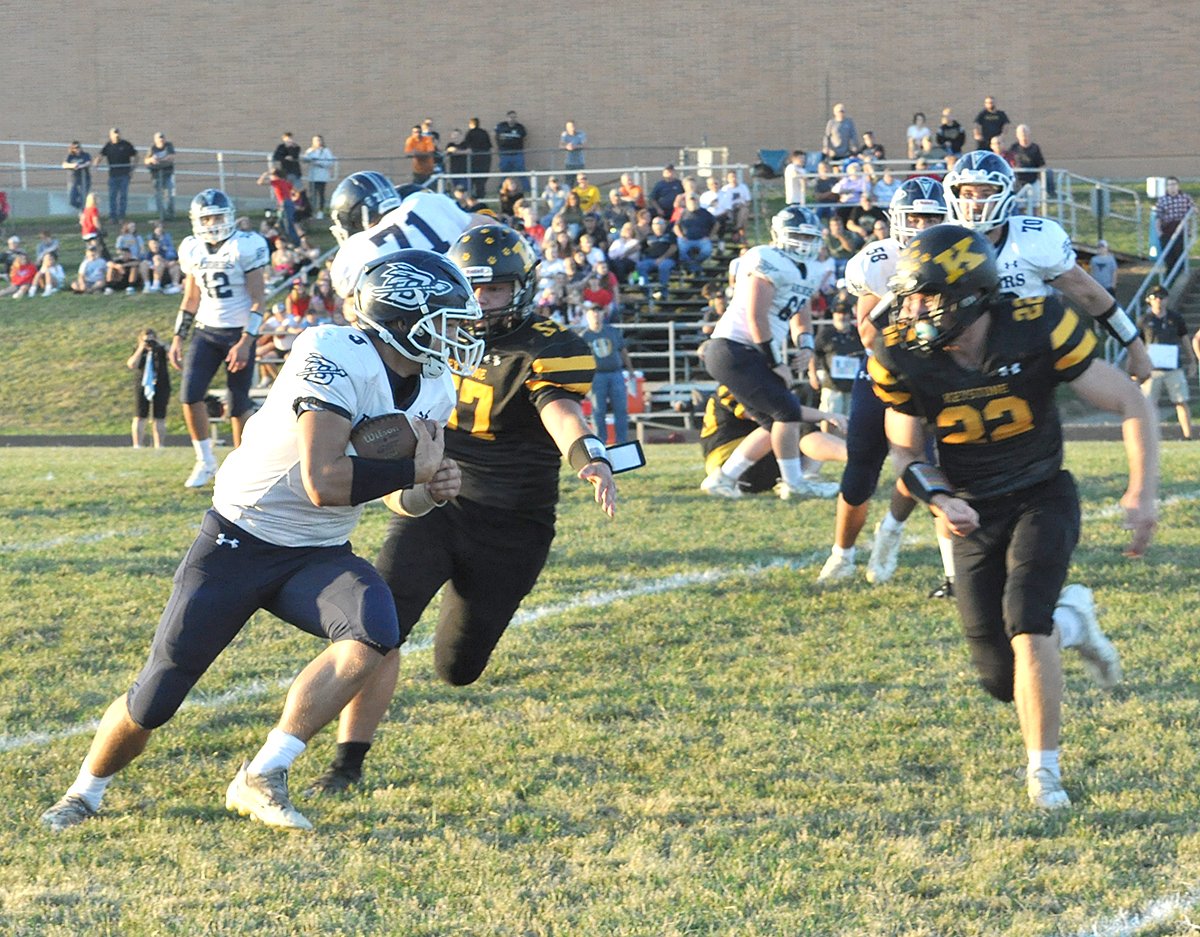 Four games make up the first week of the District 9 football postseason, all on Friday night.

All four are rematches as Coudersport visits Brockway and Union/A-C Valley travels to Keystone in Class 1A, Karns City and Brookville meet at Clarion University’s Memorial Stadium in Class 2A, and St. Marys and Punxsutawney face off at DuBois’ E.J. Mansell in Class 3A.

Overall, there are 13 D9 teams in the playoffs. Port Allegany and Redbank Valley received first-round byes in Class 1A while Central Clarion gets the Karns City/Brookville winner in the Class 2A final and Clearfield awaits the St. Marys/Punxsutawney winner in the Class 3A final.

In Class 4A, DuBois hosts Juniata next Thursday in the District 6/9 Sub-Regional Final.

In September, the Panthers built a 22-0 lead by halftime and ran for 242 yards while scoring two non-offensive touchdowns on interception and blocked punt returns in a 43-7 rout of the Falcon Knights.

Kyle Nellis ran for three TDs to go with 140 yards on 16 carries. Tyler Albright ran for 95 yards on nine carries as the two have been big parts of the Panthers’ success.

Sophomore quarterback Drew Keth has completed 37 of 71 passes for 620 yards with 7 TDs and five interceptions in his four starts since replacing the injured Rayce Weaver. Aidan Sell has rushed over 400 yards.

The team’s top rusher Dawson Camper (90-469, 6 TDs) has missed the past two games and his status is uncertain.

Back in September, this matchup was over quickly as the Rovers racked up a 42-8 lead by halftime. The Rovers outgained the Falcons, 629-99, with Brayden Fox throwing for 346 yards and six touchdowns. Alex Carlson caught 11 passes for 171 yards and three TDs, Dylan Hanna had three catches for 100 yards and two scores, Jendy Cuello ran for 105 yards on 15 carries with two TDs.

The Falcons, after that lopsided loss to the Rovers, turned in an impressive streak of three straight shutout wins over Smethport, Cameron County and Elk County Catholic before losing 39-18 to Otto-Eldred. They finished with wins over Sheffield and Bucktail. So in sum, the Falcons gave up those 70 points to the Rovers and 74 in their other eight games this year.

Three weeks ago, the Raiders traveled to Karns City and dumped the Gremlins, 34-7.

Raiders quarterback Noah Peterson ran for 125 yards on eight carries while completing 13 of 14 passes for 103 yards. Jackson Zimmerman ran for 79 yards on 25 carries with two TDs. For the Gremlins, quarterback Eric Booher completed 2 of 18 passes for 14 yards with three interceptions and Levi Hawk ran for 73 yards on nine carries.

So obviously, the Gremlins are looking to flip that script, similar to the 2020 playoffs where they upset the injury/covid-depleted Raiders 16-14 in the championship game after losing 44-0 to the Raiders during the regular season.

The Raiders average 284 yards per game offensively — 120 passing, 164 rushing — with Peterson making six starts at QB, completing 62 of 81 passes for 600 yards with seven TDs and four interceptions while rushing for 176 yards and two TDs. Zimmerman, who has missed two games, nears the 1,000-yard milestone with 980 yards on 173 carries with 15 TDs.

Receiver Brayden Kunselman has caught 54 passes for 676 yards with nine TDs and shares the team lead with Peterson with seven interceptions on a defensive unit that’s produced an amazing 37 turnovers, 25 of them interceptions.

Last week, Karns City opened some eyes with a 35-27 win at home against Clearfield in a game where both teams lost key players to injuries, including the Gremlins’ Booher, whose status for Friday is unknown.

Mason Martin, who saw QB time earlier in the season when Booher was hurt, replaced Booher in the Bison win and scored on two short runs while Nathan Hess, Levi Hawk and Braden Slater all ran for touchdowns.

So how the Gremlins like with or without Booher at quarterback could be two different things. For the season, the Gremlins average 308 yards per game offensively — 217 rushing, 91 passing — with Booher completing 53 of 117 passes for 747 yards with 6 TDs and six interceptions. Martin has completed 13 of 21 for 165 yards with an interception.

In their first meeting in late September, it was the Logan Mosier show as the Dutch scored four unanswered touchdowns to build a 28-7 lead by the 3:39 mark of the third quarter.

Mosier caught two TD passes from Charlie Coudriet covering 5 and 67 yards while also returning a punt 75 yards for a TD. He finished with 10 catches for 149 yards while Coudriet completed 16 of 22 passes for 197 yards.

Champions to be Crowned in 4A, 6A as District 10 Playoffs Get Rolling
YDL Sports Network to Broadcast Coudersport at Brockway District 9 Class 1A Quarterfinal Football Game
This website or its third-party tools process personal data.In case of sale of your personal information, you may opt out by using the link Do not sell my personal information.
×
Manage consent