Pirates (Finally) to Have a Team Hall of Fame. Who Should be in? Chris Gives his Thoughts 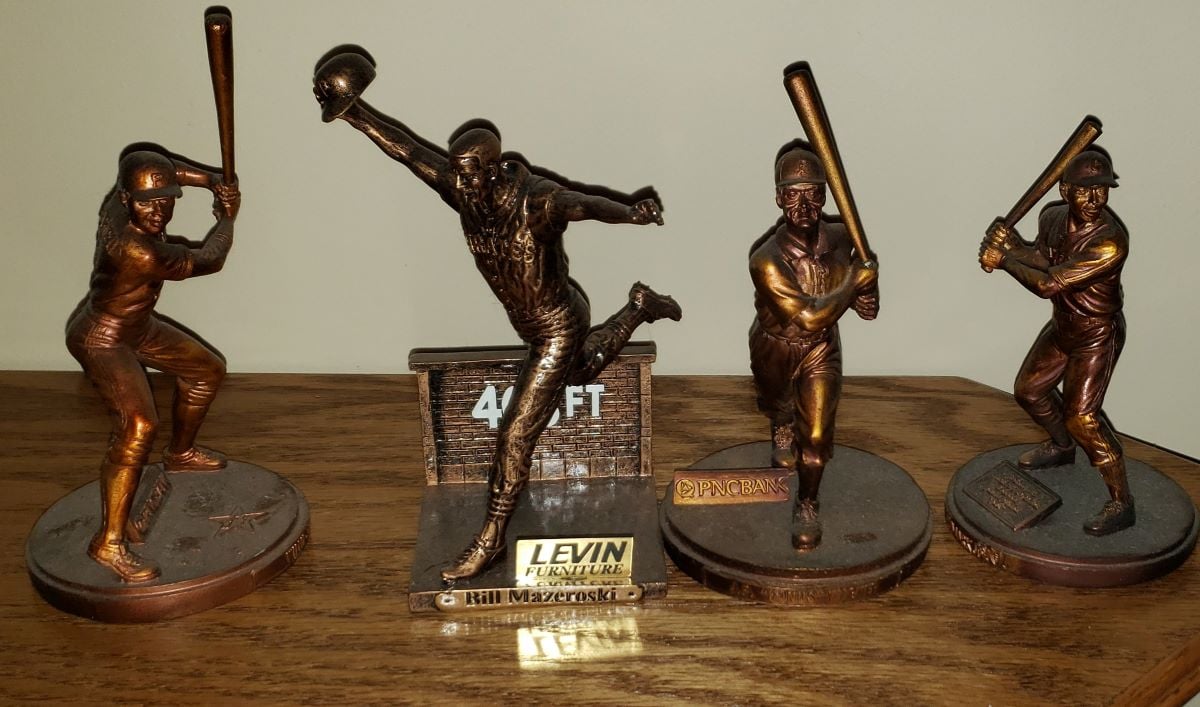 Four of the greatest Pirates of all-time have statues outside PNC Park. Replicas of those statues include (l-r) Willie Stargell, Bill Mazeroski, Honus Wagner, and Roberto Clemente

PITTSBURGH, Pa. – The Pirates announced this week that they will (finally) be starting a Hall of Fame.

That’s great news to anyone who loves the organization and loves baseball.

Despite a lot of futility over the past 30 seasons with only four winning campaigns and three playoff appearances, some of the top players in the game’s history have come through Pittsburgh.

So, obviously, when discussing a Pirates Hall of Fame, those 13 individuals are automatics.

Another Hall of Famers who spent a large amount of his time with the Pirates, Kiki Cuyler (7 of his 18 seasons), makes for 14. Bob Prince, the legendary announcer, is also in the Hall of Fame sort of as the Ford C. Frick Award winner making it 15.

The inaugural class of the Pirates Hall of Fame will be announced in August with induction taking place at the Sept. 3 game against the Blue Jays.

I would bet bottom dollar that not all 14 of those players will be in the inaugural class and there is a good chance at least one non-Hall of Famers is.

If you were going with a class of say five, a pretty good number for an inaugural class, the obvious ones are Stagrell, Wagner, and Clemente. After that, a nod might go to Bill Mazeroski, who is still alive and a cult-like figure within the franchise. The one non-Hall of Famer who might get the inaugural call is Steve Blass who in addition to his playing-day fame was also a long-time announcer with the team.

Once those five plus the remainder of the Hall of Famers get in, who is next in line?

You would have to think that Dave Parker is pretty close to being near the front of the next line of players. The “Cobra” played 11 years with the Buccos and hit .305 with 166 home runs and 758 RBIs in his time while helping the team win the 1979 World Series. He was the NL MVP in 1978.

Babe Adams is another player who should be near the top of that “next group” list.

Adams pitched 19 years (1909 to 1926) for the Pirates and won three games in the 1909 World Series, including the decisive seventh game while also pitching one game in the 1925 World Series. He won 194 regular-season games in his time in Pittsburgh while pitching to a 2.76 ERA.

Deacon Phillippe is another turn-of-the-20th-Century player who should get a serious look having pitched 12 seasons for the Pirates with 168 wins and a 2.59 ERA. He was 3-2 in the inaugural World Series in 1903 (a nine-game series) and also pitched in the 1909 Series.

A few of mid-century guys that would be series considerations included Omar Moreno, whose 412 stolen bases are the third-most in franchise history, who was a member of the 1979 World Series team, ElRoy Face, whose 186 saves are a franchise record and whose 802 appearances are also a franchise record, and Kent Tekulve, who is second in franchise history in saves with 158. Both Face (1960) and Tekulve (1979) were key members of championship teams, and Face also went 18-1 in relief in 1959. Vern Law was the 1960 Cy Young Award Winner in the NL, one of only two Pirates to ever win the award. He also won 162 games in a 16-year career spent entirely with the Bucs. Dick Groat was the 1960 NL MVP

The real question is who, if anyone, after the last World Series team in 1979 should be considered.

A couple of guys come to immediate mind.

Jason Kendall, whose 1,252 career games are the most by a catcher in franchise history, hit .306 in his nine years with the Pirates.

Doug Drabek, who won the 1990 Cy Young Award joining Law as the only Pirates to ever win the award. Drabek pitched six seasons with the Pirates helping the team to NL East titles in 1990, 1991, and 1992 winning 92 games while pitching to a 3.02 ERA.

A more controversial pick but still one that should be considered is Barry Bonds.

Yes, Bonds isn’t love in Pittsburgh considering he left after the 1992 season to join the Giants and the entire PED thing.

But as far as anyone knows, Bonds never took PEDs while in Pittsburgh and he was fantastic. The franchise’s best players since Stargell.

In seven seasons in Pittsburgh, Bonds hit .275 with 176 home runs and 251 stolen bases. He was the NL: MVP in 1990 and 1992 and finished second in 1991 and helped the Bucs to the NL East title in each of those three seasons. He was on a Hall of Fame path before going the Giants and was a big reason for the Pirates’ success during the early 1990s.

This is by no means a complete list, and there will and should be plenty of debate. Who would you like to see go into the Pirates Hall of Fame?

Column: Burns’ Performance One for the Ages Tuesday Night
Chris’s Thoughts: D9 Football Power Rating Formula Officially Useless
This website or its third-party tools process personal data.In case of sale of your personal information, you may opt out by using the link Do not sell my personal information.
×
Manage consent