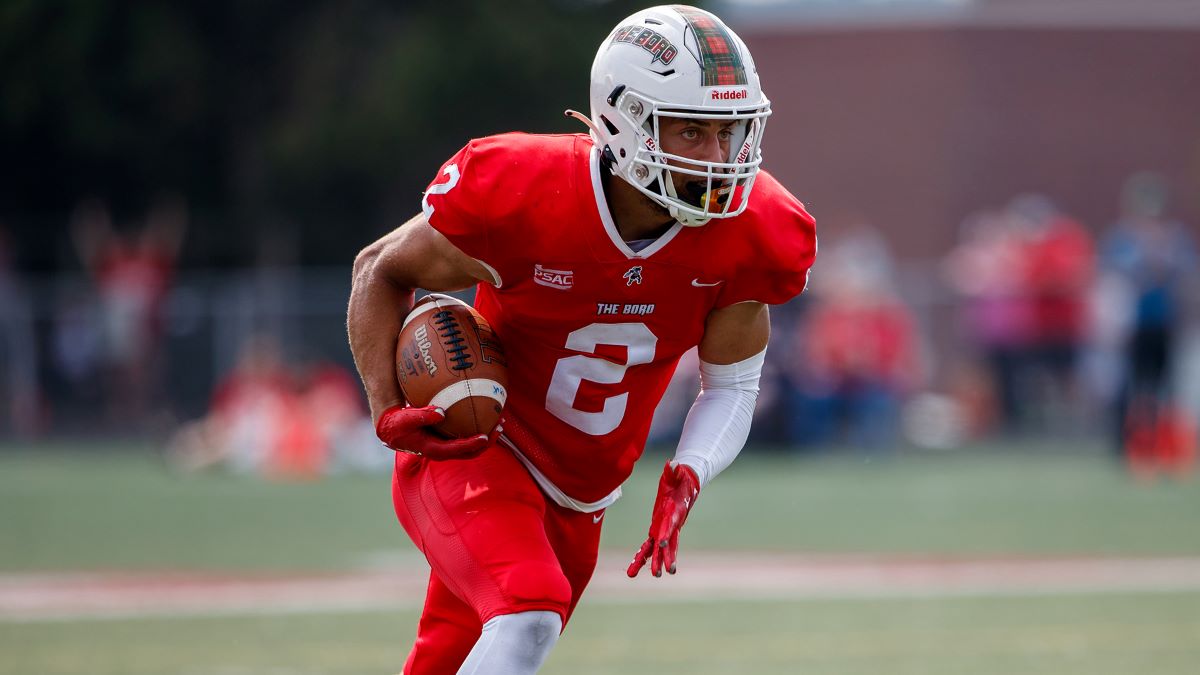 CLARION, Pa. – Led by a pair of Allen Stritzinger interceptions, including one returned 91 yards for a touchdown, Edinboro cruised to a 47-17 win over Clarion at Clarion’s Memorial Stadium Saturday afternoon.

“I am really happy with the way we played defense today,” Edinboro head coach Jake Nulph said. “That’s a credit to the players, the staff, Coach (Tony) Papley (the Scots’ defensive coordinator), and everybody involved in that. You know, Clarion is a unique offense, and it is certainly something that you don’t see every day. We got healthy today, and we got back to playing Edinboro-style defense which we fly around and we make plays.”

The Fighting Scots (4-4 overall, 2-3 PSAC West), who came into the game having lost two straight, built a 24-0 lead nine minutes into the second quarter.

“It was huge,” Nulph said. “This offense isn’t necessarily built to play from behind. So, we kept emphasizing how important the start was for us. If you look at the previous two weeks, we have been behind the eight ball. Well, this week, we really wanted to make sure we got ahead of the scoreboard and stayed there.”

An early blocked punt by Edinboro helped the Fighting Scots take control of the game early.

After a 30-yard Richie Pekmezian field goal put Edinboro ahead 3-0 on the game’s opening drive at the 8:04 mark of the first quarter, the Fighting Scots forced a Clarion punt from the Golden Eagles’ 41-yard line.

“It was a tremendous play by Wil Diaz on the punt block,” Nulph said.

Edinboro wasted little time seizing on the momentum, as Isaac Bernard hit Taddeus Stanfield on the next play to make it 10-0 Edinboro.

Bernard had a solid day going 20-for-31 passing for 235 yards, three touchdowns, and an interception.

Clarion (3-5, 2-3) moved the ball into Edinboro territory on its next possession, but the first of Stritzinger’s two interceptions, this one at the Edinboro 20-yard line, ended the threat.

“(We) were just locking in on our keys, keeping the game plan simple,” Stritzinger said. “Every guy did their job, they are one of 11.”

While the Fights Scots didn’t turn that interception into points, they did score on their next two drives after that to make it 24-0 with 6:07 to play in the first half.

Bernard hit Amani Bailey with a 15-yard scoring strike for the first of the two second-quarter touchdowns, and then Keon Anderson scored on a 1-yard run.

Anderson’s touchdown came after Edinboro stopped Clarion cold on fourth-and-1 from the Fighting Scots 46-yard line. The Golden Eagles actually had two plays to pick up one yard but Diaz and Clay Cunningham stoped Khalil Owens for no gain on third down, and then Cunningham and Malcolm Johnson stopped Corahn Alleyne for no gain on fourth down.

Clarion looked to regain some momentum just before halftime when Zach Benedek scored on a 15-yard run with 1:29 to play to get the Golden Eagles back within 17, 24-7, at the break with Clarion receiving the second-half kickoff.

But Edinboro’s defense forced a Golden Eagle punt on the first possession of the second half, and Bernard and Stanfield hooked up a second time, this time from 30 yards out, to push the lead to 31-7.

“That’s the biggest thing with our group,” Nulph said. “We have done a really good job of just playing the next play. We’ve had some adversity this season. But we just did a really good job of having a singular focus today and coming out and executing on a high level.”

Stanfield had eight catches for 138 yards and two touchdowns.

Clarion has one last gasp to say in the game when Esposito, the Brockway product, hit a 30-yard field goal to make it 31-10 with 7:48 to play in the third quarter.

But two Edinboro touchdowns in less than a minute put the contest out of reach.

Pekmezian hit a 29-yard field with 3:31 left in the third quarter to make it 34-10, and then Reed Martin intercepted a Regan Schleicher trick-play pass at the Edinboro 48 and returned it to the Clarion 19 setting up a 1-yard Zidane Thomas touchdown run. Thomas and the Scots thought he had scored on a 19-yard run one play before but he was ruled to have stepped out at the 1-yard line. No worries for Edinboro, as Thomas went over the top on the next play to push the lead to 41-10.

Watch Thomas go over the top

Stritzinger then put the nail in the coffin when he picked off a Benedek pass at the 9-yard line and went 91 yards the other way for a touchdown.

Stritzinger with his second INT of the game and he takes this one 90 yards to the house. @EdinboroFB 47, @ClarionFootball 10, 9:52 4Q pic.twitter.com/gqSffMDBF3

“It was fun,” Stritzinger said. “I haven’t played in two years, so being back and finally in the mix and being able to recognize routes and plays it felt good. I just seen the play and made it.”

Clarion had a rough day throwing the ball with three different passers combining to go 13 of 34 for 165 yards and four picks.

Benedek was 12 of 29 for 104 yards and three interceptions, Schleicher was 1 of 2 for 61 yards and the intersection, and Tony Powell went 0-for-3 in mop-up duty,

“This is the first time all season we had lost back-to-back games,” Nulph said. “We have to start stacking wins. We would win one, lose one, win one, lose one. Now, let’s try to get the next one. We’re going to enjoy this for 24 hours and then we have to get ready for Seton Hill.”

NOTES: Interestingly enough, Clarion is still looking for its first home win having gone 3-1 on the road this season but now 0-4 at Memorial Stadium. The Golden Eagles haven’t won at home since beating Seton Hill, 42-16, Oct. 5, 2019. They have lost 12 straight home games since then … Despite the lopsided score, the teams were even in yardage with both gaining 316 yards. Edinboro did so on 62 plays with Clarion running 67. The Fighting Scots had 16 first downs to the Golden Eagles 14 … There were only seven penalties in the game with Edinboro flagged twice for 20 yards and Clarion five times for 51 yards.