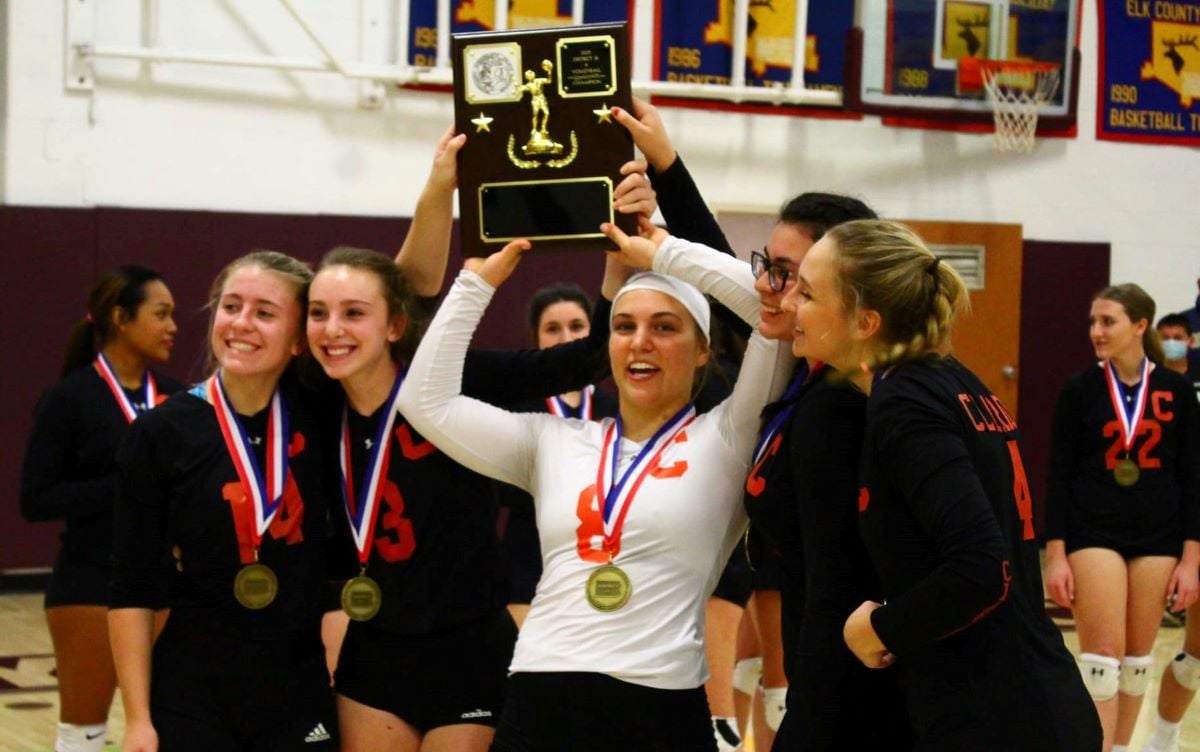 The Clarion seniors are perfect in District 9 after winning their fourth consecutive District 9 Class 1A title with a 3-0 (25-9, 25-19, 25-10) sweep of third-seeded Oswayo Valley in the title game Thursday night at the Aaron Straub Gymnasium at Elk County Catholic High School in St. Marys.

“It feels great,” Clarion head coach Shari Campbell, who has won 15 District 9 titles, all since 2001. “It’s new, you know, to a bunch of the kids. So, it’s great to just enjoy it. Our freshmen were like, what does the four (the players putting up four fingers) mean. I love it. We never overlook it. It’s awesome. It’s quite an accomplishment. They work really hard, so they deserve to enjoy it.”

Baring a rematch with Oswayo Valley in the PIAA semifinals, the Clarion seniors will finish their volleyball careers 56-0 vs. District 9 opponents with four titles.

“I am pretty proud of us,” senior Libero Jordan Best, who had just got done expressing that she never envisioned four D9 titles when she was a freshman, said. “I have loved the journey and the adventure. It has been super fun and awesome.”

Clarion wasted little time asserting its dominance over an Oswayo Valley squad that had entered the match unbeaten at 17-0 while losing just four sets all season.

The Lady Cats behind two kills and two aces from Korrin Burns led 11-1 before the fans had settled into their seats.

“It’s the district championships, so we were coming in hard,” Burns, who had a match-high 23 kills to go with five aces and two digs, said. “We were really striving for a good lead. The last couple of games, we didn’t start off strong. So, yeah, we were looking for that lead.”

For Simko, who finished with seven kills, it continued a string of strong play for the senior, who was asked to move to right-side hitter this year from middle hitter on last year’s state title team.

“Changing positions was a little bit of a change,” Simko said. “It was a fun change, just giving something different. I like the change. I think we are all happy, being able to adjust that easily from year-to-year, being able to fill positions. I think that is a good thing to have.”

Oswayo Valley rebounded at the start of the second set and grabbed a 5-4 lead thanks to a pair of Avery Kellert kills.

Clarion fought back and the set was tied at 10 before the Lady Cats went on a 7-1 run that saw Burns with two kills, Noel Anthony with a kill, and Adia Needham with an ace.

Runs like that have been a familiar refrain for Clarion this season, something Campbell attributes to the way the Lady Cats practice.

“It’s the work we do in the practice gym,” Campbell said. “We do drills that put them in those scenarios and make them have to get themselves dug out of that kind of stuff. We do competitive drills. We make them accomplish multiple things in a row to score just one point. So, I think that’s what you are seeing (it) is the work we do in our practice.”

The third set saw another long run by Clarion.

This time, the Lady Cats led 11-10 following three straight points from Oswayo Valley, including the 10th point on an ace by Trinity Lundy.

But Lundy’s ace was the last point the Green Wave scored.

Clarion rolled off the next 14 points, including four kills from Burns, to win the set, the match, and the championship easily.

“Our runs from the serving line and our defense backing up the serving line, really helps us keep that run and keeps us having the ball,” Noel Anthony, who served all but the first point of the run, said.

“I liked her match tonight,” Campbell said of her first-year senior setter. “It was kind of a cumulation of the work she’s done. She’s the perfect person to come in and have the guts to take over in that situation. She’s such a smart kid on the court and off the court. She is able to really learn things quickly, and she’s a competitor. I just can’t say more about the work she did. She was just phenomenal tonight.”

Best and Bri Pierce each added five digs to help Clarion use a team effort on defense.

“This team is really fun,” senior Paola Lopez said. “It has great energy. It’s always fun to be around them.”

NOTES – Clarion has won 57 straight matches against District 9 opponents dating back to the 2017 consolation match win over Coudersport … Overall, the Lady Cats have won 40 straight matches, while going 120-3 sets during that streak … This is Clarion’s fifth straight trip to the PIAA playoffs, the 19th in the 22 years that Class 1A has been in existence, and the 21st time in school history.

Keystone Captures First District 9 Volleyball Title Since 1992 with 2A Crown
Bradford, McDowell Girls’ Soccer Win Subregional Contests
We use cookies on our website to give you the most relevant experience by remembering your preferences and repeat visits. By clicking “Accept All”, you consent to the use of ALL the cookies. However, you may visit "Cookie Settings" to provide a controlled consent.
Cookie SettingsAccept All
Manage consent