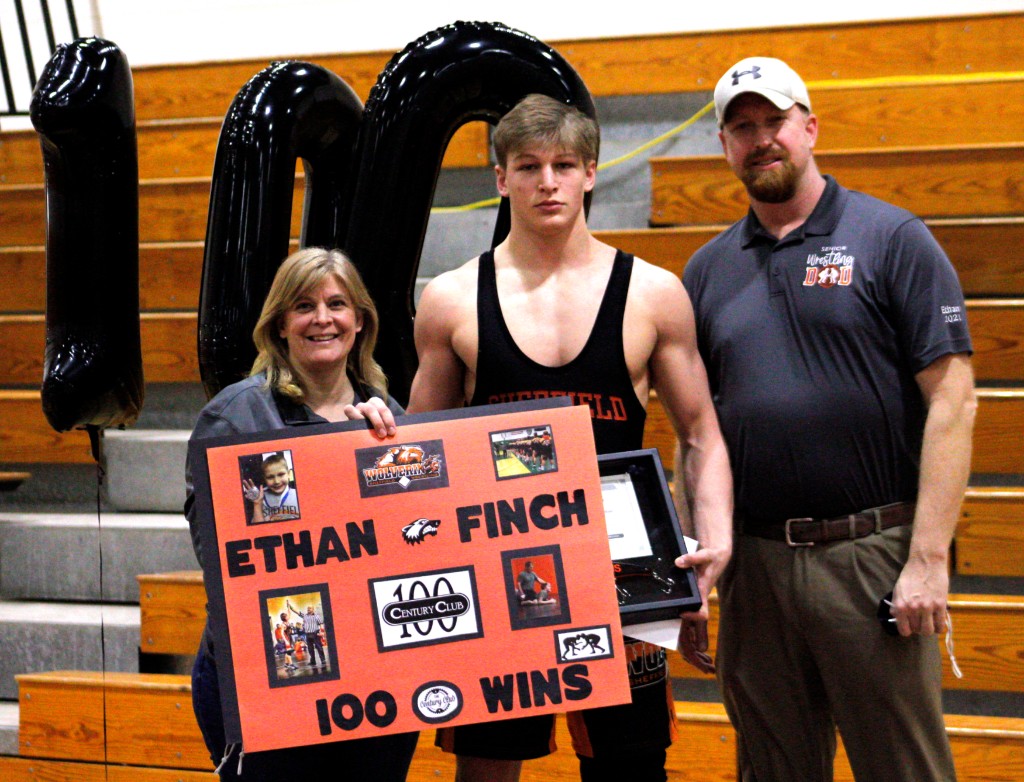 Sheffield's Ethan Finch with his mom, Julie and dad, Jared after his 100th career win on Thursday against Cranberry. Photo by Cody Elms.

SHEFFIELD, Pa. – The stage was set perfectly for Sheffield’s Ethan Finch on Thursday.

The final match of the night, his team trailing 36-33, in search of win No. 100 on senior night against the school where his coach, Jack Rice, won a state title as a high school wrestler.

And it was all over in 26 breathtaking seconds.

That’s all the time it took for Finch to pin Cranberry’s Walker Willey at 215 pounds and earn his spot as the first wrestler in program history to achieve the 100-win milestone.

“It doesn’t happen too often,” said Rice. “One-hundred wins is huge. He’s the first 100-match winner for Sheffield. Senior Night, against my old team that I won a state title for, to come down to the final match..it’s a perfect storm.”

Finch, who broke Terry Schraders’s school record last weekend at the Union City duals, was one of two wrestlers to earn his 100th win Thursday across Districts 9 and 10, joining Maplewood’s Joey King, who also got his win on his senior night against Cambridge Springs … also at 215 pounds.

Finch talked about his achievement afterward:

“I’m so happy for him, he’s earned it,” Rice said. “He started out his freshman year 16-12 and just exponentially improved each year. We’ve achieved all of our goals except for one. We’re going for that state title.”

Finch has come a long way since a 16-win freshman season.

For Finch, who will take his talents to the University of Pittsburgh next season, it starts with simply outworking everyone else.

He has that first man in, last man out mentality, something his coach obviously notices.

“Lifting in the morning, lifting at 3 p.m., practice, and then he runs afterward,” Rice said. “He wants it, he’s hungry and hopefully we have a postseason for him to be able to perform.”

As for the match itself, the Wolverines got additional pins from Collin Brown at 113, A.J. Barnes at 120, Trenton Mead at 138 and Cooper Traister at 152.

They also got a big 5-2 decision from Landon Mead over Kevin Pearsall in their 172-pound match.

Seth Yeager won at 285 pounds for Cranberry, as did Brayden McFetridge at 189. The Berries received four forfeit victories as well.

“I thought we wrestled well,” Rice said. “We won the wrestling on the mat. The score was a lot closer just because we couldn’t fill all of the weights. I’m really proud of Landon Mead. He had the pressure match and he was the difference-maker. He came through with that big win and that sealed the deal for us. I’m real happy with how the kids wrestled tonight.”

Feb. 4, 2021 D9 Boys’ Hoops: Ruhlman’s Layup in Final 10 Seconds Lifts Brookville Past Clearfield; Orton Passes Dad on ACV All-Time Scoring List
District 9 and District 10 Basketball and Wrestling Schedule for Feb. 5, 2021
This website or its third-party tools process personal data.In case of sale of your personal information, you may opt out by using the link Do not sell my personal information.
×
Manage consent