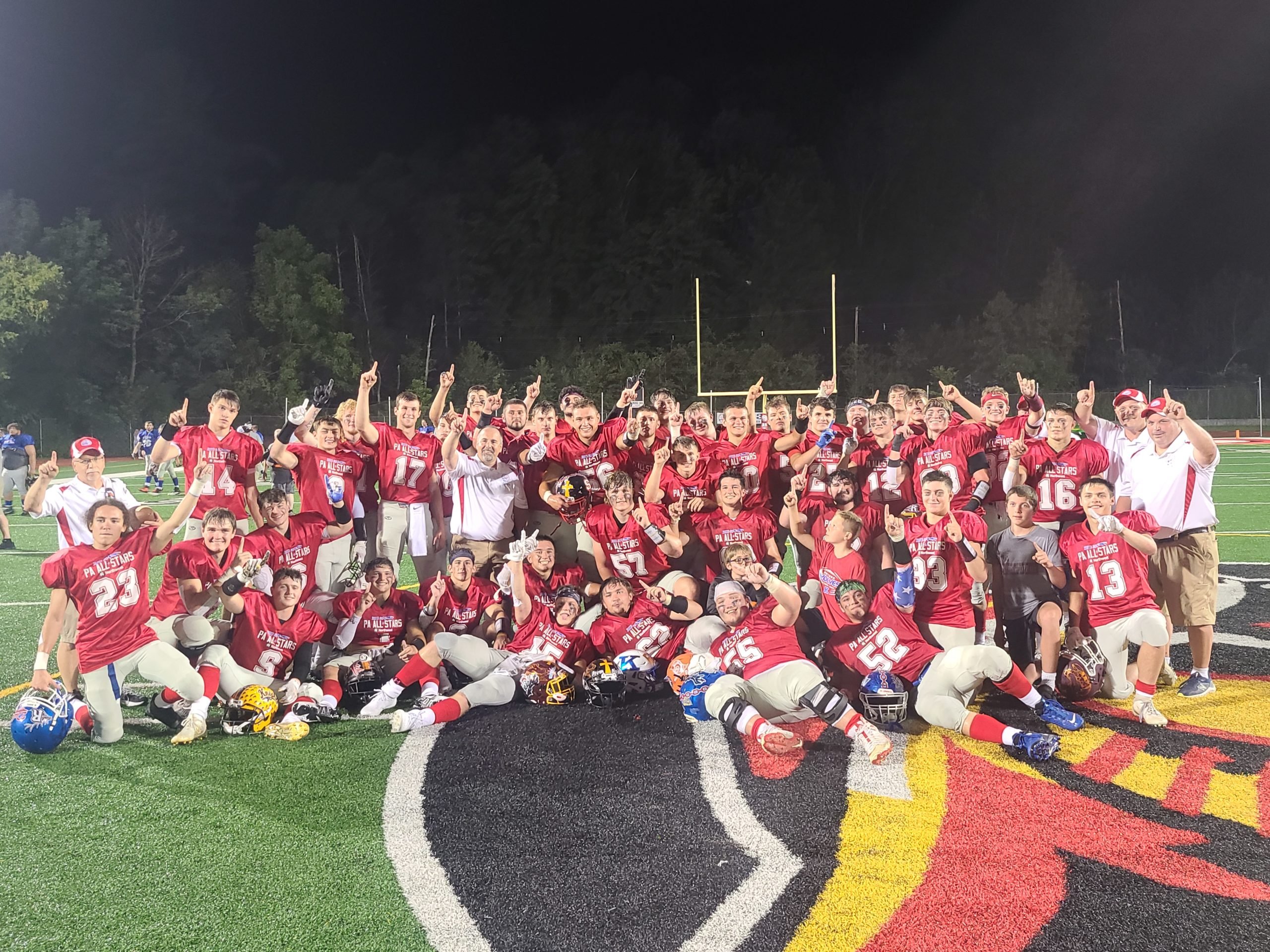 Zuke Smith (Kane) and Owen Trumbull (Eisenhower) threw two touchdowns each, Smith ran for another and Pennsylvania’s defense was impenetrable in a 35-0 blanking of New York in the 47th annual Big 30 All-Star Charities Classic on Saturday at Parkway Field.

The shutout was the fourth all-time for Pennsylvania and the first since a 27-0 victory in 2008.

“Great kids who are well coached,” said Pennsylvania head coach Mark Heindl, who serves as head coach of the Ridgway Elkers. “I keep going back to the motivation part of it. This senior group, it doesn’t matter what town they were from. They experienced a lot of heartache and a lot of adversity through the pandemic, and to be able to come to a stadium that was packed, they got an atmosphere that they missed out on in the fall, and I think they left the best 60 minutes of their football careers when they walked off the field.”

While the defense was in complete control from the get-go, it took the Pennsylvania offense a little bit of time to get rolling. Once they did, however, there was no slowing them down.

Smith and Trumbull spearheaded the effort. The duo will both be playing collegiately this fall at Alfred (Smith) and Thiel (Trumbull) respectively, and they put on a clinic.

Smith connected with Ethan Smith (Otto-Eldred) for a 47-yard pitch and catch, which set up his 18-yard scoring toss to Taro Tanaka (Port Allegany), with Tanaka weaving his way in and out of traffic at the 2:06 mark of the opening quarter to get the scoring going.

“It was something special, something to cherish,” Smith said about Pennsylvania’s performance.

It was Trumbull’s turn next, as he found Alex Bon (Ridgway) for a 20-yard gain, which helped set up a familiar connection to his high school teammate, Dillon Benson on fourth and goal from the five at the 3:58 juncture of the second quarter.

“We worked hard all week and the boys came out and put on a show,” Trumbull said. “Honestly pretty much everything (was working). If we had a mess up, we went right back to it, fixed what we needed to fix and it was there.”

The Pennsylvania defense forced a quick three-and-out, and the offense went back to work in the 2-minute drill.

Completions from Zuke Smith to Ethan Smith and Tanaka got Pennsylvania deep in New York territory. Pennsylvania did get backed up momentarily, facing a third-and-20 from the New York 28. No matter, as Zuke Smith rolled to his left and threw a strike to Bon for a score and a 21-0 lead with less than a minute to go in the half, capping a 95-yard drive.

Zuke Smith with his 2nd TD pass of the half, this one a 28-yarder to Alex Bon (Ridgway). Pennsylvania 21, New York 0 late 2ndQ #Big30 pic.twitter.com/4eUbNvD4xx

“They’re phenomenal, they’re leaders,” Heindl said of his two quarterbacks. “You saw it various times throughout the game. Those kids took control. They’re well-coached. When you’re a quarterback, you’re a leader on the field and they showed that.”

“A little bit of motivation goes a long way,” Heindl said. “They left it all out on the field tonight. To pitch a shutout is pretty special. This was a complete Pennsylvania win. We told them in pregame the biggest thing you have to worry about is dignity, class and respect and tonight our guys hit on every one of those three things and throughout the last two weeks.”

Offensively it was more of the same in the second half. Smith called his own number at the 2:12 mark of the third quarter from six yards out to make it 27-0.

Zuke Smith runs it in this time from 6 yards out. Pennsylvania 27, New York 0 late in the 3rd #Big30 pic.twitter.com/SNnO4F7kl9

Moments later, after yet another defensive stop, Trumbull and the offense got the ball back, with the Eisenhower product unleashing a ball to Donovan Fiscus (Warren) who came up with the 41-yard touchdown grab. A 2-point conversion pas to Trey Ayers (Port Allegany) put the mercy rule in effect with 14:50 to go in the game.

Donovan Fiscus hauls in a touchdown pass from Owen Trumbull in the fourth quarter. Photo by Wade Aiken.

“It goes back to what I said before, these kids got cheated out of a season,” Heindl said. “I know a lot of them, I think of Eisenhower, Smethport and St. Marys as three of those teams that lost in the district finals. Forty-one guys got the opportunity to come back and they walked out not only as state champions representing Pennsylvania but posted a shutout at the same time.”

Big 30 All-Star Charities Classic Football All-Star Game Returns Tonight (Aug. 7)
2021 District 9 Football Video Preview – Bradford Owls
We use cookies on our website to give you the most relevant experience by remembering your preferences and repeat visits. By clicking “Accept All”, you consent to the use of ALL the cookies. However, you may visit "Cookie Settings" to provide a controlled consent.
Cookie SettingsAccept All
Manage consent