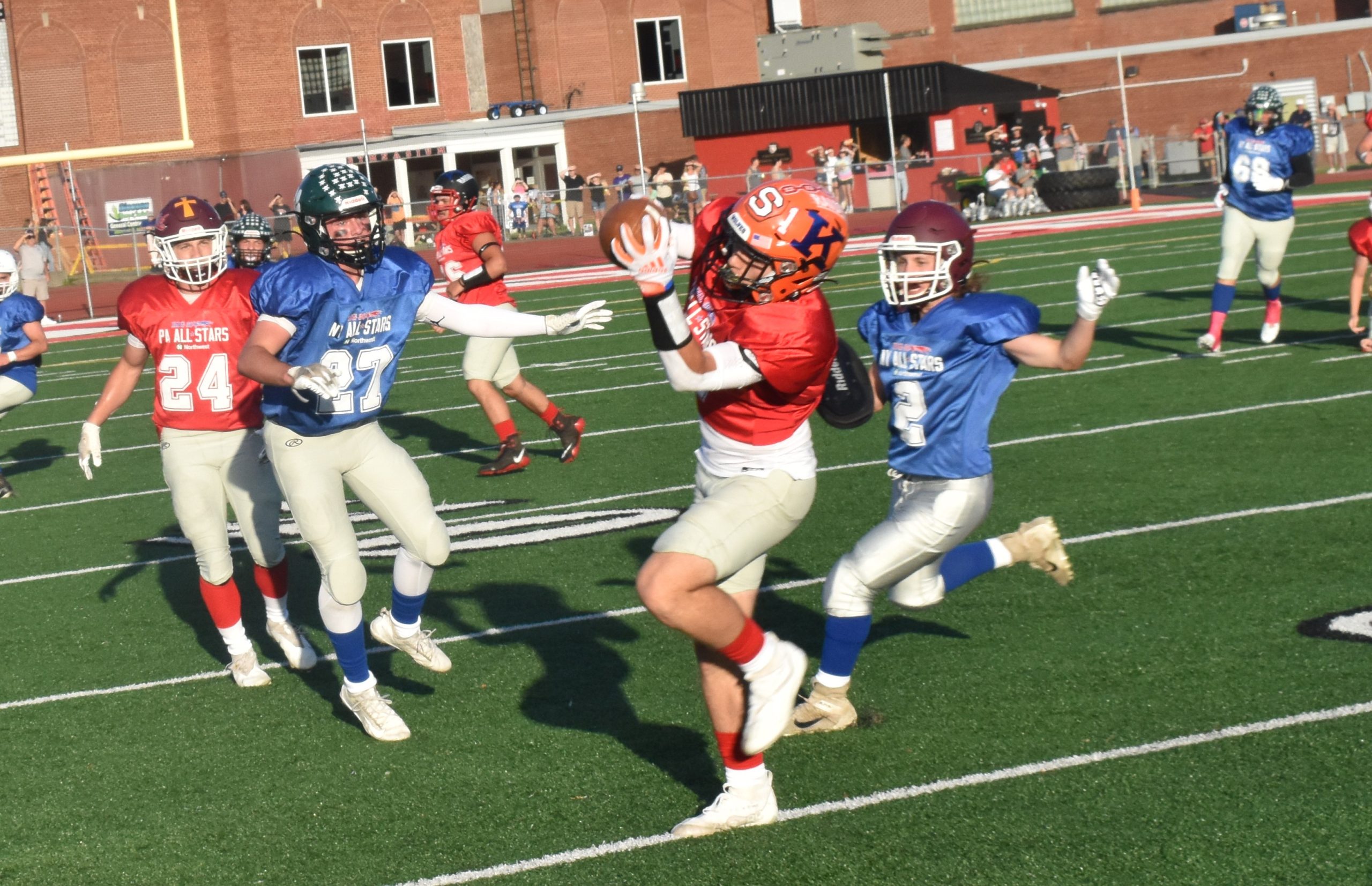 Pennsylvania's Alex Ognen (Smethport) hauls in a pass during the first quarter. Photo by Andy Close.

BRADFORD, Pa. – In a game that was controlled by the defense, Pennsylvania continued its recent domination in the Big 30 All-Star Charities Classic with a 27-13 win over New York.

Noah Lent (Smethport) accounted for three total touchdowns, two through the air and one on the ground as the Keystone state took the lead in the all-time series for the first time, 23-22-3. The Keystone state also has a six-game unbeaten streak (the 2019 game ended in a 27-all tie).

“These guys are phenomenal to coach,” said Pennsylvania coach Justin Bienkowski of Port Allegany. “We’re proud of them.”

The first score of the game came with 7:04 left in the second quarter, as Lent scampered 29 yards down to the 1-yard line and called his own number from there, and also kicked the extra point to make it 7-0.

The Pennsylvania defense forced several key turnovers, including one that set up the second score, as Justice Greene (Warren) had a strip sack to set the Pennsylvania offense up at the New York 21.

This time it was Lent connecting with his high school teammate, Alex Ognen for a 1-yard scoring strike to make it 14-0 with 2:25 left until halftime.

That 14-0 margin was the halftime score, marking six consecutive shutout quarters by the Pennsylvania defense (they won 35-0 in 2021).

“We felt like we were going to control the game with defense,” Bienkowski said. “We had some guys that had to play out of position because of game rules and things like that, but we were able to figure it out.”

All three defensive units – line, linebackers, and secondary were dominant in limiting New York to just 138 yards of total offense (100 rushing on 47 carries and 38 through the air).

Elijah Fitton (Bradford) and Chase Weimer (Port Allegany) led the secondary with an interception each.

The only hiccup came in the third quarter when New York took the opening drive of the half and drove right down the field and scored on Jamison Pittman’s (Olean) 5-yard run.

“They hit us hard with the fullback trap and toss,” Bienkowski said. “They got us a little bit, but the kids adjusted. I heard a couple of kids say we’ve worked too hard and played too well to give that third quarter away. It was great for them to kind of do that.”

They certainly did, as they shut down the New York offense the rest of the way.

The Pennsylvania offense struck just 10 seconds into the fourth quarter, as Lent swung the ball out to Cam Marciniak (Ridgway) who did the rest, weaving through defenders on his way to a 49-yard touchdown that made it 20-7.

Less than three minutes later, Pennsylvania put the game out of reach. After the Pennsylvania defense forced a three-and-out, there was a bad snap on the New York punt that put the ball on the 2-yard line.

Christian Coudriet (St. Marys) wasted little time in helping put the game away, firing a short 1-yard strike to Eric Salberg (Ridgway) that made it 27-7.

“These kids are high character kids,” Bienkowski said. “We had zero issues. To be able to say your part of the PA All-Stars, 49-year tradition, next year is 50. We did our part to keep the streak alive. It’s a really cool experience. I’ve been coaching football for 20 years and this ranks right up there with one of the best memories.”

New York added a late touchdown with 1:59 left when Josh Bush picked up a fumble and raced 30 yards for a score.

“I’m so glad we were able to coach this group of guys,” Bienkowski said. “Football season is here.”