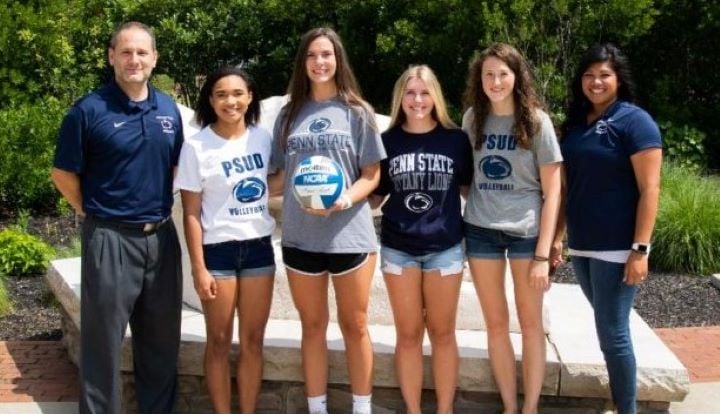 DUBOIS, Pa. – The Penn State DuBois Women’s Volleyball team has brought in a 2020 recruiting class that has a heavy District 9 flavor to it.

“This is an extremely talented group of ladies we have signing,” PSU DuBois head coach Dave Alberts said. “All of them come from strong local programs that I follow. I’ve seen what they have done for their previous teams and I can’t wait to see them in action for PSUD Volleyball.”

Kaschalk was a first-team All-District 9 performer in 2019, a PVCA All-State selection, and a District 9 Class 3A All-star First-team selection after also earning D9 3A All-Star first-team honors in 2018.

Girvin helped Clarion to a pair of District 9 Class 1A titles and finished her career with 578 digs and 72 aces.

Statistics for Baumcratz, who is transferring to PSU DuBois this year, were not provided, but Alberts told ClarionSportszone.com that he was “impressed that she was a four-year varsity starter and that she had played very hitter position.”

“Being a versatile hitter, she will have multiple opportunities to assist our offense,” Alberts said.

Alberts is entering his sixth season with the program, which is a member of the Penn State University Athletic Conference (PSUAC) and the United States College Athletic Association (USCAA). In 2018, Penn State DuBois qualified for the PSUAC playoffs for the first time in 10 years and advanced to the USCAA National Championships in Virginia Beach.