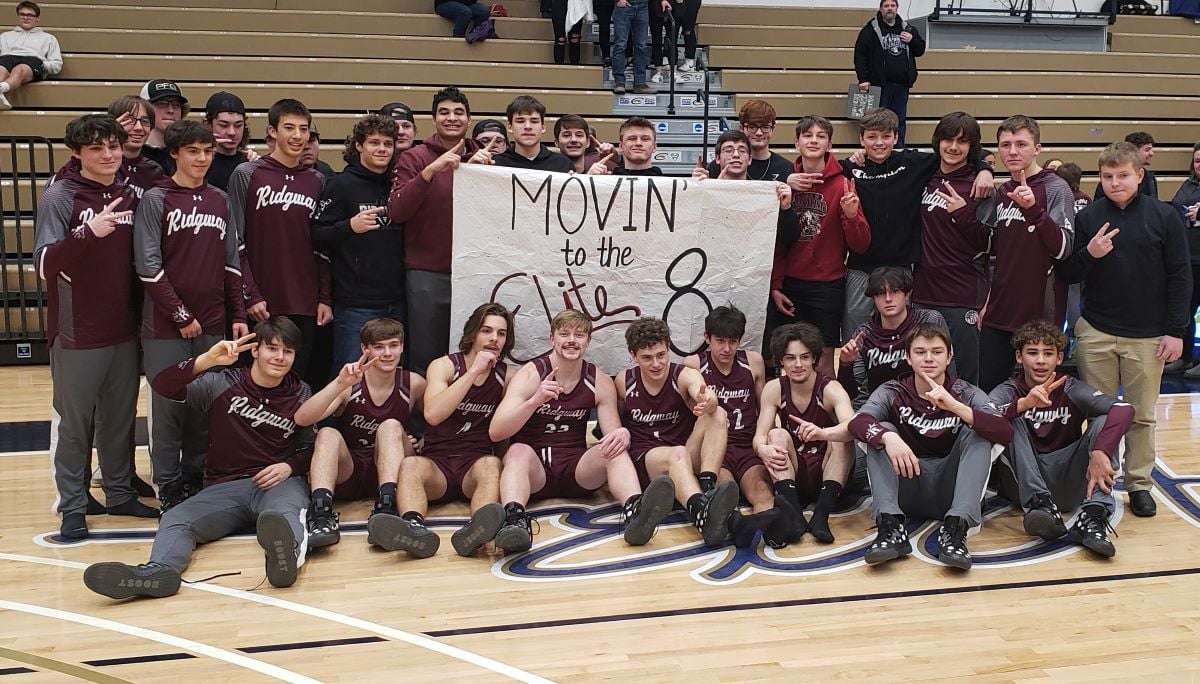 CLARION, Pa. – Dan Park poured in a career-high 29 points and grabbed 15 rebounds, as Ridgway advanced to the PIAA Class 2A quarterfinals with a 59-53 win over Greensburg Central Catholic in a second-round game Saturday at Clarion University’s Tippin Gym.

“Tonight was my night,” Park, who scored 13 in the first half and 16 in the second half, said. “But without Dom (Allegretto) we wouldn’t be here as well as everybody else on the team and the coaching staff, the practice players.”

Park was instrumental in Ridgway building a four-point, 26-22, halftime lead scoring nine second-quarter points including hitting a buzzer-beating jumper with about 2/10th of a second on the clock.

That was one of three buzzer-beating shots for the Elkers, who Jack Benninger do it to end the first quarter, and Aaron Sorg drill a 3-pointer to end the third quarter.

“We have actually been pretty bad at the end of quarters this year,” Tony Allegretto said. “We have been working on it a little bit more at the end of practice, and it was helpful tonight that the kids could hear us count down. They all knew and were aware of the time. We didn’t run any set plays, we just let them know how much time was left. We were much more patient than we have been. We executed today, and it saved us. To get those shots at the end of the first three quarters, that helped us out.”

But Ridgway struggled from the charity stripe in the quarter missing 10 free throws including 10 of the first 20 it took in the fourth quarter.

That coupled with hot outside shooting from WPIAL third-place finisher Greensburg Central Catholic (19-5), which hit three 3-pointers in the quarter, including two from Tyree Turner, allowed the Centurions to close to within two points, 51-49, on a Turner three with 1:47 to play.

“They (free throws) are not easy to shoot in a situation like that,” Tony Allegretto said.

The game was still a two-point contest, 53-51, after Anthony Semecko put home an offensive rebound off a missed three.

But Dom Allegretto hit one of two free throws with 50.6 seconds left, and Park came up with a massive offensive rebound on the miss allowing Allegretto to again split a pair of charity shots with 32.1 seconds to go to make it a two-possession game, 55-51.

Semecko scored again for GCC to make it 55-53 with 21.1 seconds left, but Ridgway finally connected on both of its free throws with 19.5 to go when Jack Benninger hit both shots to make it 57-53.

Park then hit two more free throws in the final 10 seconds to set the final score.

“I try not to look at the scoreboard much at all,” Park said when asked how he kept his composure as GCC made its run. “I just want to keep my head down and go to work and look up whenever it is over.”

Benninger had his second straight game of 13 points, which ties a career-high for him, while Sorg added 11. Dom Allegretto was held to six points, all in the fourth quarter on free throws.

Brevan Williams led GCC with 15 points with Ryan Appelby adding 13, six in the first quarter, and Turner 10, including six in the fourth quarter.

Ridgway will take on WPIAL champion and unbeaten Our Lady of Sacred Heart (OLSH), the defending PIAA champion who has won 65 in a row dating back to the 2020 season (OLSH was in the PIAA quarterfinals when the season was ended because of COVID-19) including a 74-43 win over Carlynton in the second round Saturday. That win moved OLSH to 25-0 on the season.

“We know how good they are,” Tony Allegretto said.

For Ridgway, it marks the fourth time under Allegretto, who is in his 18th and final season at the school with a career mark of 314-153, the Elkers have reached the PIAA semifinals, including the second time in four years. They lost in the quarterfinals in 2019 and 2017 and in the semifinals in 2012.

“It’s very special to me personally,” Park said. “I was part of one team that was able to make it to the Elite 8 (2019 in his freshman year), and I am proud to join that group again.”

NOTES: Park’s previous career-high was 26 points in the AML semifinals this year against Johnsonburg on Feb. 17. It marks the third time in his career he has scored 25 or more points, as he netted 25 vs. Bradford on Feb. 13, 2021, and the 11th time he has scored at least 20, including the seventh time this year … The 59 points were a season-high for the Elkers and the most points they had scored in a game in 34 games since also scoring 59 vs. Galeton on Feb. 17, 2021. The last time Ridgway scored more than 59 in a contest was Feb. 11, 2020, when the Elkers poured in 72 vs. Sheffield.

Six D9/10 Wrestlers Claim Second-Place Finishes at PIAA Wrestling Championships
Otto-Eldred Girls Rally from 10 Down Going to Fourth Quarter to Stun Bishop Canevin; ECC Comeback from 18 Down Falls Just Short
This website or its third-party tools process personal data.In case of sale of your personal information, you may opt out by using the link Do not sell my personal information.
×
Manage consent