Pair of D9 Alumnae to be Inducted into Clarion U. Sports Hall of Fame; (Day) Shute, Heeter to be Honored 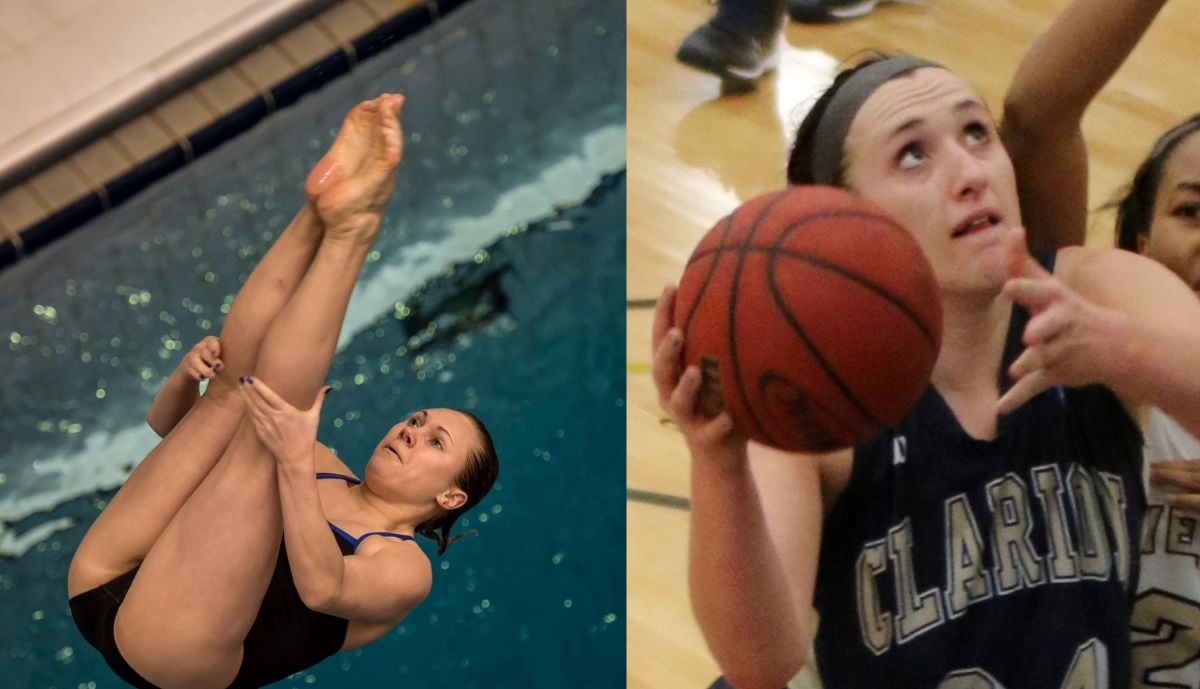 Kristin (Day) Shute (left) and Hannah Heeter (right) will be inducted into the Clarion U. Sports Hall of Fame April 29. Photos courtesy of Clarion University Athletics

CLARION, Pa. – A pair of District 9 alumnae will be inducted into the Clarion University Sports Hall of Fame April 29, it was announced Tuesday, March 15.

Dr. Kristin (Day) Shute, a 2011 DuBois graduate and a national championship diver, and Hannah Heeter, a 2010 Cranberry graduate and multiple-sport start, will be two of the seven inductees at the ceremony being held inside Tippin Gym.

Shute is one of the most accomplished overall women’s student-athletes in Clarion sports history.

Coached by Dave Hrovat, the eight-time All-American and three-time NCAA champion diver capped her senior year in 2015 by winning the biggest awards in the nation when she was named the 2015 NCAA Woman of the Year (all division) Oct. 18, 2015.

She was the first winner of the NCAA Woman of the Year Award from any Pennsylvania-based university.

She became a back-to-back champion on the 1-meter platform by taking home the title again in 2015.

An NCAA Post-Graduate Scholarship winner, Shute went on to complete her education at Lake Erie College of Osteopathic Medicine in 2019 with a Doctor of Osteopathy degree and is currently employed in the Penn State Health Network.

A native of Reynoldsville, Pa. Kristin and her husband, Brandon, have a son Parker.

Heeter was a superstar in both volleyball and basketball for the Golden Eagles and is one of the top two-sport student-athletes ever to don a uniform at Clarion in addition to earning Academic All-America honors.

In volleyball, under coach Jennifer Herron, she helped lead the Golden Eagles to a four-year record of 107-35, four NCAA Division II Tournament appearances, a trip to the NCAA Elite 8, an Atlantic Region title, and a PSAC title.

Heeter also earned top Academic honors by being selected as the 2013 Capital One Academic All-America of the Year for Volleyball in Division II.

A freshman in 2010, she helped Clarion to a 32-5 overall record and 17-2 PSAC West mark good for first place in the West. The Golden Eagles went on to win the PSAC Title and their first-ever Atlantic Region title which meant a trip to the Elite 8 for the first time in school history.

A first-team PSAC-West, AVCA All-Region, and Daktronics All-Region selection, she had 338 kills (.308 hitting percentage), averaging 2.62 kills per set. She also had 99 blocks and 90 digs.

In basketball under head coaches Gie Parsons and Jana Ashley, Heeter recorded the fourth-most rebounds in school history (967), the sixth-most blocks (97), and the 10th-most points (1,095) despite having her senior season cut short in December by a knee injury.

Her 12.4 rebounds per game career average are the Clarion school record.

She earned PSAC West Freshman of the Year honors in 2012 when she scored 322 points and grabbed a school-freshman-record 284 rebounds to go along with 47 steals, 43 assists, and 32 blocks. She had 13 double-doubles that season including a 22-point, 25-rebound effort vs. California.

Her 13.3 rpg that season set the Clarion single-season record, and she posted 16 double-doubles while earning first-team PSAC-West and second-team Daktronics All-Region honors.

That year, Heeter was also named a first-team Capital One Academic All-America and earned the Pete Nevins PSAC Scholar-Athlete of the Year Award.

In 2014, she scored 300 points (14.3 ppg) and collected 258 rebounds (12.3 rpg) in 21 games. A first-team PSAC West and second-team Daktronics All-Region choice, she was again named a first-team Capital One Academic All-American.

An injury in her eighth game of the 2015 season sidelined her for the remainder of her career.

A 2015 grad of Clarion University in Biology, Hannah earned her J.D. Degree from Belmont University College of Law in 2018 and currently resides in Nashville, Tenn. She is currently an attorney at Legility LLC.

The Hall of Fame will start with a 5:30 p.m. social at the Second Floor Eagle’s Perch at Tippin Gym and will continue with the dinner a 7 p.m. Tickets for the event at $40 and are available online at www.clarion.edu/shof or by contacting the Office of Alumni Engagement at 814-393-2572.

Join D9and10Sports March Madness Bracket Challenge
March 15, 2022 D9/D10 Basketball Scores Powered by Janney Montgomery Scott in Clarion
This website or its third-party tools process personal data.In case of sale of your personal information, you may opt out by using the link Do not sell my personal information.
×
Manage consent