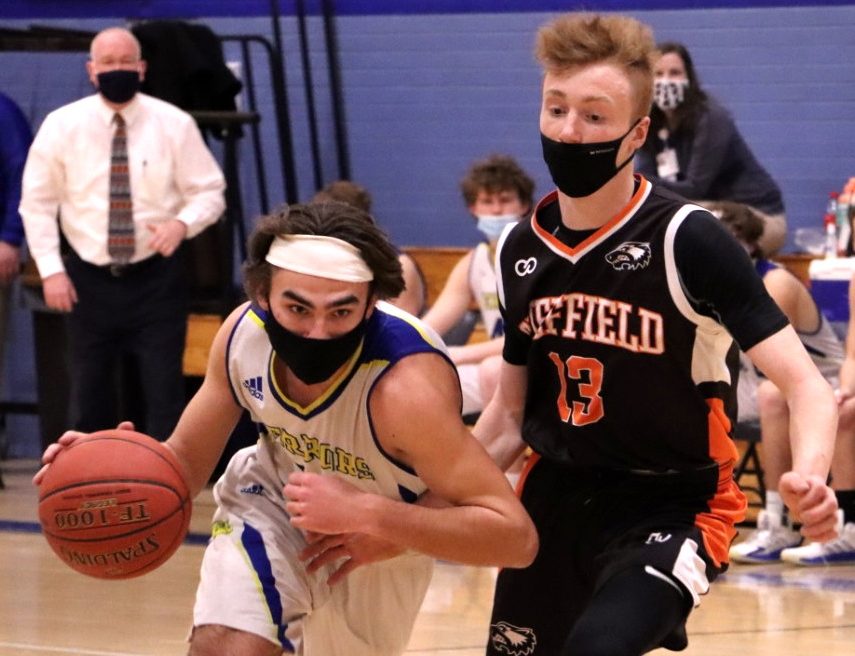 DUKE CENTER, Pa. – Otto-Eldred picked the perfect time to have its best offensive game of the season.

Gavin Jimmerson scored 22 points to lead four players in double figures as the No. 8 seed Terrors (9-8) powered past No. 9 Sheffield, 82-63 on Monday at the Terror Dome.

With the win, the Terrors advance to play at top seed Elk County Catholic on Wednesday.

“I’m lucky to have some experienced seniors to lead that charge, said Otto-Eldred coach Steve Bell. “We understand big-game situations and execution. You’ve got Cole Sebastian, Jake Merry, Zaz (Bell), our three senior starters. They listen, they follow the game plan and they bought into what we’ve been talking about the last half of the season. Every game, I think we’ve gotten better.”

The key to the game came late in the second quarter.

The Terrors had played nearly picture-perfect, building a double-digit lead thanks in large part to the play of Austin Cousins, who scored 10 of his 14 points in the first quarter.

Bell and Sebastian had gone out of the game with two fouls, and Sheffield and Connor Finch, who had eight second-quarter points, cut the lead to four, 30-26 in the latter stages of the first half.

That’s when coach Bell reinserted his two starters, and the response was a 9-0 run to close the half.

“I think that was the key to the game,” coach Bell said. “ Zaz and Cole both had two fouls. They were on the bench for a long stretch there in the second quarter. With about two minutes left I put them back in and tried to stop that run and get us a little momentum going into halftime and it worked perfectly. We scored a couple of buckets and instead of going into halftime maybe up two, we went up 11 and I think that was really the key to the ball game.”

The lead swelled to 20 early in the third quarter as Jimmerson scored nine of his 22 points in the third and Jake Merry (who scored 19 points) and Cousins both knocked down 3s.

The Terrors were able to hold the Wolverines (10-11) at that distance for most of the second half.

They did so despite the best efforts of Sheffield’s Tyler Hepinger, who scored 15 of his game-high 23 points in the second half. The Wolverine senior finishes his career second on the program’s all-time scoring list.

“I give Sheffield a lot of credit,” coach Bell said. “They never quit tonight and kept coming after us.”

Sebastian and Bell led the O-E defense, with Bell also cleaning up the boards for a Terrors’ squad that, after starting 0-7, has now won 7-straight.

Needless to say, it’s been quite the turnaround.

“It’s because they didn’t quit halfway through the season,” coach Bell said. “We’ve never had problems with energy or effort. They’ve been able to continue to get better. They understand their roles and they’ve really melded together and become a nice team.”

And now they get a date with the Crusaders

“What can you say? “ noted Bell. “Great program, No. 1 seed, we have to go there. We couldn’t be any better than we are right now, so, I think that gives us a chance. You never know, anything can happen.