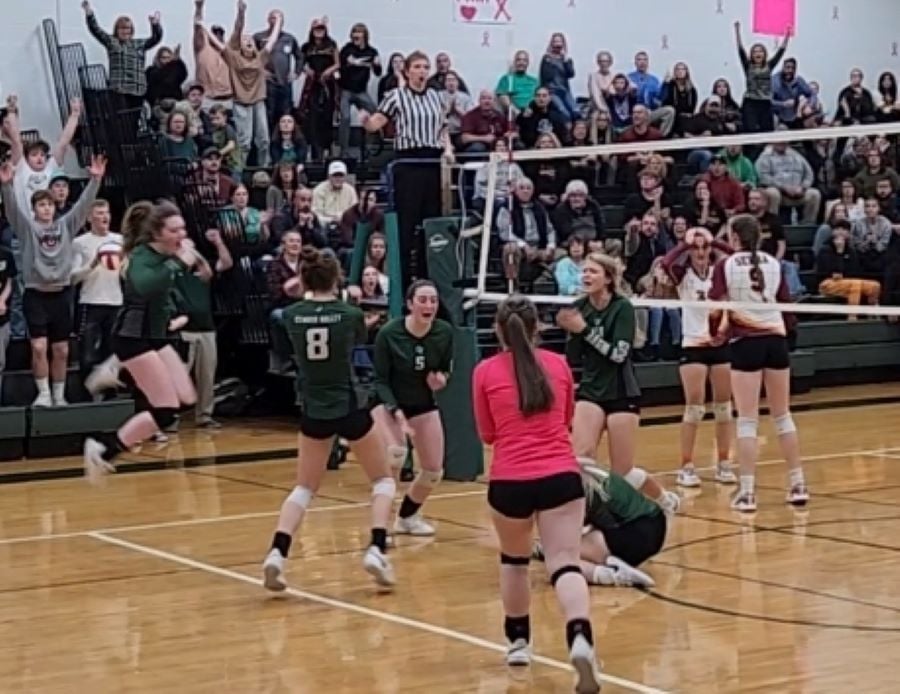 SHINGLEHOUSE, Pa. – Not content with one piece of history, Oswayo Valley made some more on Tuesday.

Serra Catholic had all the momentum after rallying from a 2-0 deficit, but the Green Wave (23-0) gathered themselves, jumping out to an 11-4 lead after kills from Avaree Kellert and Makenna Manning.

The Eagles (18-3) battled back, getting within 14-13 before Olivia Cook slammed home the last of her 23 kills to send the Green Wave to the quarterfinals.

“Going into the fifth set, I think we wanted it so bad,” Kellert said. “For the seniors, we didn’t want this to be our last game. This is the farthest OV has ever gone. We said this is a home game, we need to do it. We need to do this and we need to keep pushing.”

OV coach Ken Kellert was proud of the way his team responded.

“I told them if you want it you have to come together,” coach Kellert said. “I told them they have to play and they all knew it. Give them (Serra Catholic) credit. They were digging everything and we weren’t digging.”

Oswayo Valley wins it, 15-13 in the fifth! Green Wave are moving on to the PIAA quarterfinals pic.twitter.com/kTQVgkW5vo

The late-match dramatics didn’t look like they were going to be necessary early on.

OV called time out and promptly went on a 3-0 run to close the set after Serra was unable to handle a serve from Manning.

That momentum carried over into the second set, which was dominated by OV. An ace from Kellert and back-to-back kills by Cook had the Green Wave out in front 10-1. They never looked back, sending the sellout crowd into a frenzy.

Oswayo Valley takes the second set 25-12 to go up 2-0 on Serra Catholic pic.twitter.com/vOGAKhFYwh

“I think the crowd helped them a lot,” coach Kellert said. “It’s the most people we’ve had in the stands for a match. I think they said we sold 375 tickets. That’s quite a few people in a small town – and area. We had Coudersport and other areas come out and support us, too.”

Serra jumped out to a 12-7 lead in the third set after a kill from Sarah Glaneman, prompting an OV timeout. The Eagles led through, taking a 24-18 lead before OV almost pulled off a big rally, going on a 4-0 run, cutting the margin to 24-22 after an Eagles’ hitting error.

But Serra closed out the third to extend the match and then dominated the fourth set, much like OV did in the second.

“We’re up and I think they just relaxed a little bit,” coach Kellert said. “They (Serra) got some momentum, then some mistakes happen on our side. We can’t do that against teams of this caliber. You’re now at a level where little mistakes win or lose a game.”

In addition to Lundy, Cook, and Kellert, Perkins finished with 25 digs, four kills, and one block.

As they continue to make history, the Green Wave aren’t content to see their run end any time soon.

Varndell Leads Maplewood into PIAA 1A Second Round with Sweep of ECC
PIAA Releases 2022 Quarterfinal Sites for Volleyball, Soccer Saturday
This website or its third-party tools process personal data.In case of sale of your personal information, you may opt out by using the link Do not sell my personal information.
×
Manage consent