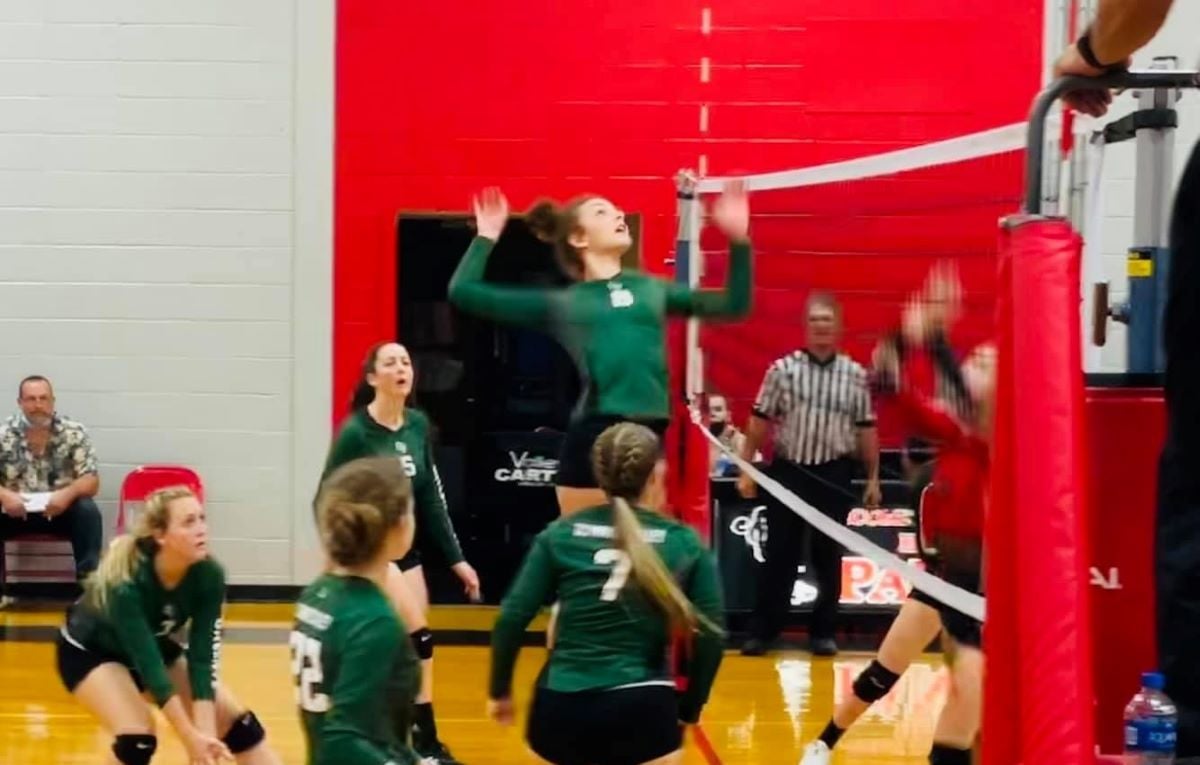 With the win, the Green Wave also avenged a loss to the Lady Cats in the D9 title match a year ago.

“This feels amazing,” said Oswayo Valley’s Olivia Cook, who was named Allegheny Grille of Foxburg Player of the Match, notching 21 kills, 14 digs, three blocks, and three aces. “We’re all so excited. We put in the work for it. I’m proud of everyone on the team. It was a really good game.”

The first set was back-and-forth, with each team unable to gain more than a 3-point advantage. With the score tied at 18-all, the No. 2 seed Green Wave was able to close the set on a 7-4 run to break the 35-set streak for the sixth-seeded Lady Cats.

Clarion jumped out to a big lead in the second set and led 23-15 before OV came storming back to tie it up, 24-24, before kills from Arayna Girvan and Taylor Alston ultimately gave Clarion the set.

It was Oswayo Valley that opened up the big lead in the third set, and they led 23-15 before Clarion rallied to within 24-22 before Cook closed it out for OV.

Avaree Kellert also had a big game hitting for the Green Wave with 18 kills to go along with 16 digs, four aces, and two blocks.

There was no such drama in the fourth set, as OV jumped out to a 10-1 lead and never looked back.

Trinity Lundy had 37 set assists for OV to go along with seven digs, five aces (three in a row in the fourth set), and two kills and Praylan Perkins finished with 17 digs, six kills, three aces, and one block.

“I’m very proud of them, they played their hearts out,” said Oswayo Valley coach Ken Kellert. “They wanted it, they wanted it bad. You could see it out there, they were really pushing each other. Even when they made a mistake, they pushed themselves to win.”

Girvan was phenomenal in her final game in a Clarion uniform, finishing with 21 kills and nine digs, while Hadlee Campbell had 11 kills, four blocks, and nine digs, Bri Pierce 16 digs, and Grace Ochs 42 set assists.

“This season was a lot of adversity,” said Clarion head coach Shari Campbell. “I’m hoping that our young players feel what that feels like and know there are other teams that are working and that it takes work to attain things. We don’t want to make a habit of losing.”

With the win, Oswayo Valley advances to play top-seed Elk County Catholic for the District 9 title on Thursday (Kane High School, 6:30 p.m.). Both teams punched their ticket to the state playoffs, with D9 taking two entries.

The two teams met in the semifinals a year ago, a 3-0 win for OV.

“If we play like we did tonight, I think we’ll be fine,” Kellert said. “I put my cards on the table for us.”

The Lady Crusaders were led by the duo of Tori Newton and Reagan Bauer, who had 18 and 16 kills, respectively.

“I am incredibly proud of these girls,” said Elk County Catholic coach Tricia Bauer. “We lost the first game and they came out on fire in the second game. They played their hearts out tonight. Our defense made some incredible saves and our hitters did a great job of creating chaos on the other side.”

Also for ECC, Madison Marzullo had 10 kills and Kiri Emmert ran the offense to the tune of 47 set assists.

“We are really excited to be back in the District 9 championship game,” Bauer said.

Maplewood, Cochranton to Meet for D10 1A Volleyball Title After Semifinal Wins Tuesday
Obama Academy Opts Not to Play DuBois; 2A Title Game Moved to 7 p.m. Wednesday
This website or its third-party tools process personal data.In case of sale of your personal information, you may opt out by using the link Do not sell my personal information.
×
Manage consent