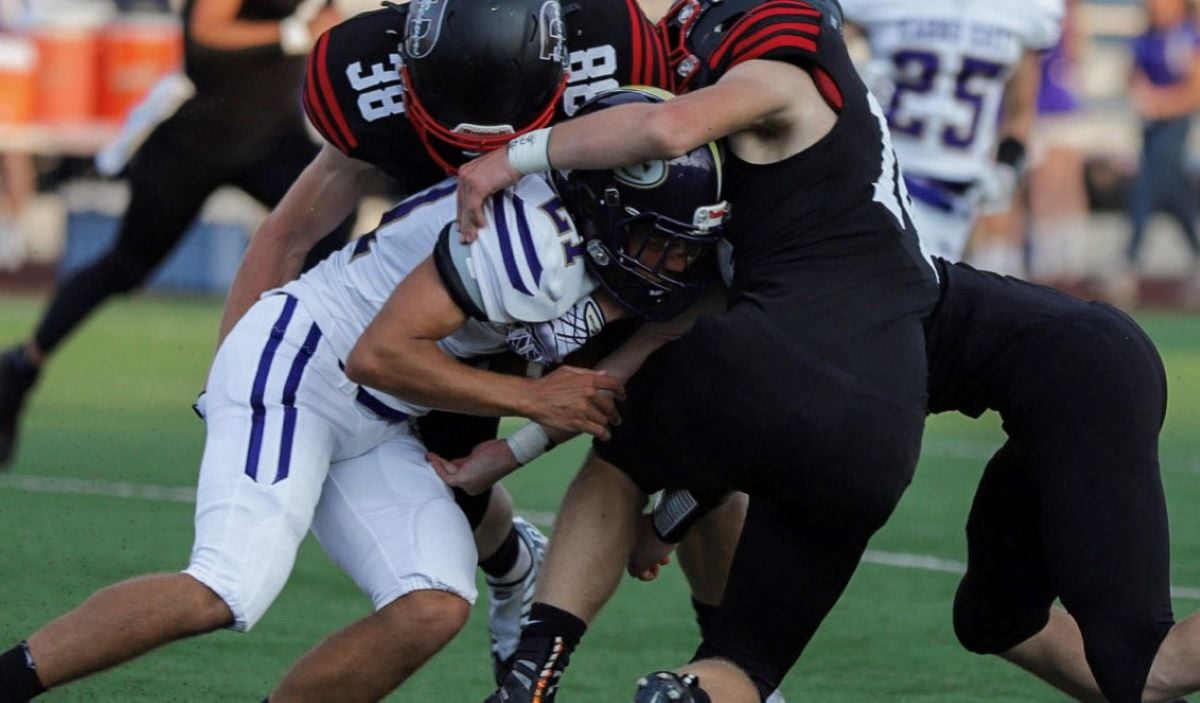 Levi Hawk, shown earlier in the season, had 99 yards and 2 TDs on the ground for Karns City in a win over St. Marys Friday. Photo by Anna Mattivi

The Gremlins (2-2) didn’t throw an official pass – the only pass they attempted on the night was called back due to a penalty – but used 59 rushing plays to control the clock and keep the ball away from a Dutch offense that came into the game averaging 34.7 ppg.

The Gremlins used two first-half touchdown runs from Levi Hawk to score their 14 points, as Hawk scored on a 4-yard run in the first quarter and a 9-yard run in the second quarter.

But it was the drive Karns City didn’t score on that might have won the Gremlins the game.

Up by 14 coming out of halftime, Karns City received the second-half kickoff and got great field position after a nice return to the St. Marys 47-yard line.

The Gremlins proceeded to run 14 plays and reached the 1-yard line where they faced a fourth-and-goal. While Nathan Hess was stopped for a 1-yard loss – despite the fact Karns City actually had 12 players on the field – the real damage was in the time chewed off the clock.

By the time St. Marys ran its first play of the second half, there was just 4:39 to play in the third quarter.

While neither team was able to get anything going for most of the next nine minutes or so, St. Marys got itself back in the game with 6:53 to play when Charlie Coudriet his Carter Chadsey with a 6-yard touchdown pass. The two-point conversion was no good, but the KC lead was now eight, 14-6.

The Dutch then had a golden opportunity to tie the game.

After a first-down pass by Cooper Coyle to Nate Garing was called back on a blindside block, Karns City had the ball at its own 5-yard line on third-and-forever.

A short run followed by a short punt and a nice return by Matt Davis from the KC 36 set the Dutch up at the Karns City 23-yard line with 4:49 to play.

A first-down pass to Chadsey moved the ball to the 16.

On second down, Coudriet got lucky when Zach Kelly dropped a sure interception around the 5-yard line, and on third down a Courdiert pass was incomplete setting up fourth-and-3 with about 2 ½ minutes to play.

However, just as Dornish appeared to reach the first-down stick at the 13-yard line, Micah Rupp exploded from his safety position phishing Dornish out of bounds very close – it seemed – to the first down. A measurement was surely coming.

Except, inexplicably, the official on the far sideline marked the ball out of bounds at the 15-yard line giving Karns City the ball back.

The Gremlins were then the beneficiaries of another great spot during the ensuing drive that all but ended the game.

On second-and-3 from the KC 37-yard line, Coyle hit the center of the line before being driven back at the 39. He lost the ball on the play but his forward progress was ruled to have been stopped. But instead of spotting the ball at the 39, the ball was placed at the 40-yard line after a long discussion giving the Gremlins a first down.

The St. Marys sideline, rightfully upset, was then flagged for an unsportsmanlike penalty moving the ball into Dutch territory at the 45-yard line.

The Dutch were able to stop the clock one last time and forced a punt taking over with under 30 seconds left at around their own 15.

A hook-and-ladder pass then moved the ball out over the 30-yard line, but Braden Slater picked off Coudriet on the game’s final play.

Hawk ran 17 times for 99 yards for Karns City with Hess, just a freshman, rushing 15 times for 54 yards. Coyle had 12 carries for 52 yards. In all, nine different Gremlins carried the ball.

Coudriet was 12 of 23 passing for 163 yards, a touchdown, and two interceptions while being limited to one yard rushing on six carries.

Logan Mosier had five catches for 66 yards with Chadsey adding three for 39 and the touchdown and Mason Sheeley two for 35.

Matt Davis and Dornish each ran for 17 yards.

Eisenhower’s Bauer Sets School Record as Knights Run Past Seneca
Camper’s Running, Strong Defense Send Union/A-C Valley Past Brockway
This website or its third-party tools process personal data.In case of sale of your personal information, you may opt out by using the link Do not sell my personal information.
×
Manage consent