Oil City Defense Stops 2-Point Conversion, as Oilers Survive and Advance in PIAA 4A First Round 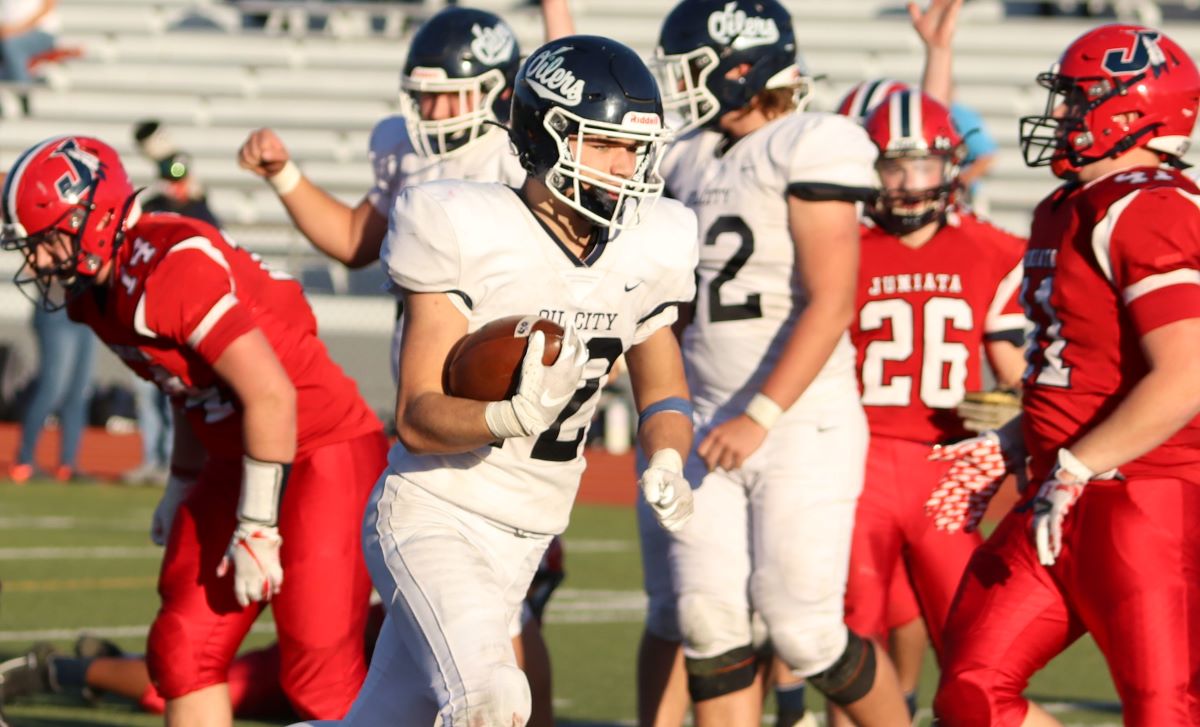 Dakota Cole scores the decisive 2-point conversion for Oil City in the fourth quarter a 1/2 hour (but just one play) after he had pulled the Oilers within 1 with an 87-yar scoring catch and run. Photo by Jared Bakaysa of JB Graphics. See more of Bakaysa's work here

ALTOONA, Pa. – Oil City stopped a Juniata 2-point conversion with 31 seconds left and held off the Indians for a 34-33 win in the first round of the PIAA Class 4A playoffs at Mansion Park in Altoona Saturday afternoon.

“We’re very fortunate,” Oilers head coach Dan York said. “As many turnovers as we had and stupid things that we did, were just happy with the win.”

Thanks in large part to four second-half turnovers by the Oilers, the Indians erased a 26-7 halftime deficit by scoring 20 points off turnovers to take a 27-26 lead on a 4-yard Yaneil Ortz run with 8:56 left in the game.

Oil City responded almost immediately when Holden Stahl connected with Dakota Cole for an 87-yard go-ahead touchdown pass that gave the Oilers the lead back, at 34-27, following the 2-point conversion. The 87-yard touchdown pass tied for the second-longest in Oil City history, according to Penny Weichel, the former Sports Editor of the Oil City Derrick.

The 2-point conversion came nearly a half-hour after the touchdown, as on the scoring play one of the referees and a photographer on the Oil City sideline collided. Both people were taken from the stadium on stretchers, and the teams were sent off the field.

After returning to the field and getting a three-minute warm-up period, Oil City recorded what turned out to be the winning 2-point conversion play on a nifty run by Cole.

Following back-to-back punts, Juniata took over at its 38-yard line with 1:52 to play.

The Indians promptly went backward with a false start and a hold followed by an incomplete pass and another false start that led them facing a third-and-30 from the 18-yard line.

But quarterback Jacob Condo threw a 35-yard pass to Emmanuel O’Donnell to convert the first down and give Juniata the ball at the Oil City 47-yard line.

A roughing the passer call moved the ball to the Oilers 32-yard line, and, eventually, the Indians had third-and-2 from the 5-yard line when Condo found a wide-open Caleb Seeger in the end zone to get the Indians back within one.

Juniata initially lined up to kick the extra point in an attempt to tie the game, but after a timeout changed the play to a 2-point attempt.

Condo rolled out to the right and was unable to find an open receiver, which led to a scramble that was denied by a group of Oilers defenders who took him down behind the line of scrimmage.

Needing to get the ball back again, a failed onside kick attempt allowed Stahl and Oil City to take a knee and seal the victory.

Stahl had a solid day going 6-of-9 for 192 yards and a touchdown with his favorite target Cole hauling in three catches for 125 yards and the late fourth-quarter score.

“Stahls has been a good leader the last three years,” Ford said. “We expect that out of him.”

Oil City jumped out to an 8-0 lead on an 11-yard scoop-and-score fumble recovery touchdown from Brandon Eppley.

Isaiah Aeschbacher extended the Oilers lead to 14-0 late in the first quarter after breaking a pair of tackles for a 33-yard rushing touchdown.

Isaiah Aeschbacher had 115 yards on 11 carries to lead the Oilers rushers.

A failed fourth-down attempt by the Indians gave the Oilers the ball back at their own 35-yard that ended with an eight-play, 65-yard drive that was capped off with a 10-yard run by Sean Stack and the Oilers led 20-0 with 8:47 left in the second quarter.

Juniata quickly responded to get on the board as Condo found O’Donnell on a broken coverage for a 70-yard score to make it 20-7 a minute later.

Despite the loss, Condo was 18-of-32 for 206 yards with a touchdown and interception. O’Donnell was the leading receiver hauling in six catches for 134 yards.

Stahl helped the Oilers add one more score before the half with a 3-yard quarterback sneak to make it 26-7.

The second half saw a momentum swing for the Indians.

On the opening kickoff, Jaric Trout recovered a fumble that was lost by Cole and gave the Indians the ball at the Oilers 22-yard line.

The drive ended with Stahl intercepting Condo in the end zone to keep the Indians from scoring.

A few plays later another fumble was lost by Oil City that was recovered by Junita, this time by Austin Derr.

The Indians stalled out again on their drive, but things shifted their way after their punt.

A blindside block backed the Oilers up to their 21-yard line and a controversial catch-fumble from Cole was picked up by Zach Herr for a 30-yard fumble recovery touchdown to cut the deficit to 26-14 with a minute left in the third.

Oil City was once again on the ropes as an illegal block was called on the kick return that backed the Oilers up to their own 20.

Juniata capitalized on another turnover, as Stahl fumbled as he was getting sacked and gave the Indians the ball at the nine yard line.

Yaneil Ortiz punched it in with a 2-yard run and the Indians once again cut the deficit to 26-21 less than a minute into the fourth quarter.

Another mistake by Oil City saw it lose the ball on the ensuing kickoff that was recovered by Juniata at the 13-yard line.

Ortiz finished the game with seven carries for 17 yards and two scores, both coming in the second half for the Indians. Caleb Seeger was the leading rusher with nine carries for 58 yards.