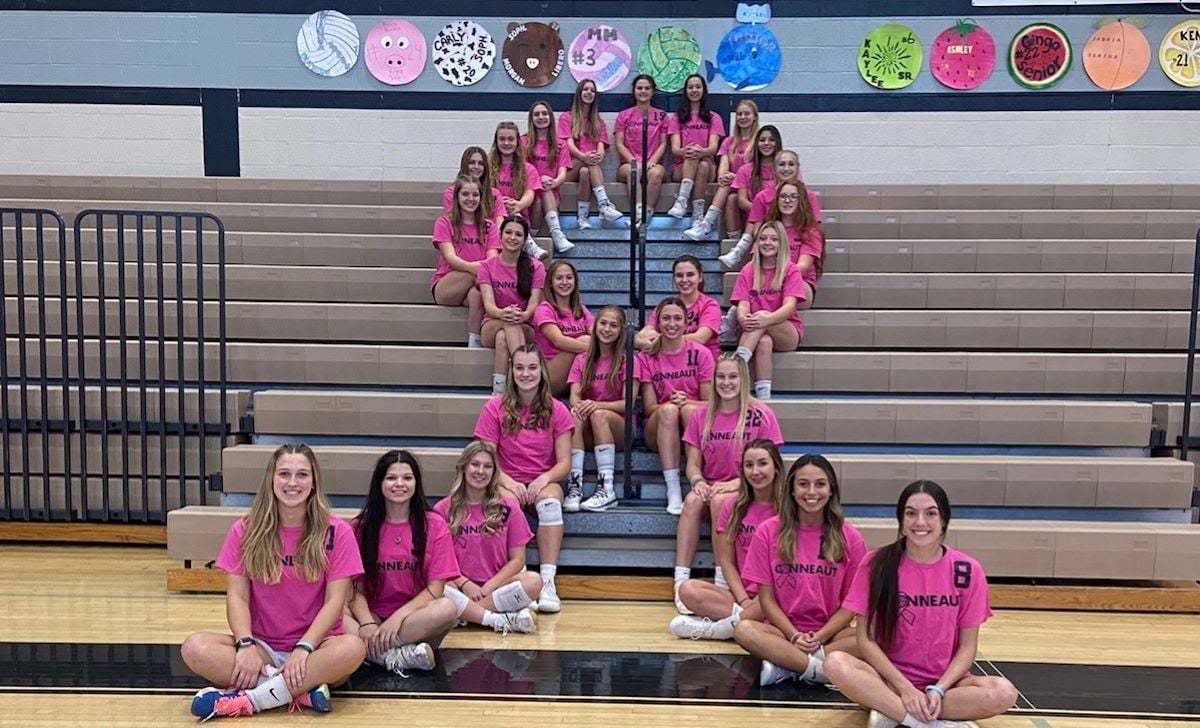 Conneaut players form a ribbon prior to their Pink Out win Thursday. Submitted photo

Abby King ran the offense for the Ramettes with 14 set assists.

Jayna Johnson did a little bit of everything with 11 assists, 4 kills, and two blocks, while Cora Jekielek had seven kills, Myka Costanzo had five aces, Maya Smith had four aces, and Mia Anderson added three blocks.

Costanzo talked about the win afterward:

Alyssa Arblaster added nine kills and 10 digs for the Panthers who also got six kills and three aces from Lyndzee Amory.

Lindsey Greco ran the offense for Saegertown with 35 set assists and added eight digs with Rylie Braymer pacing the defense with 15 digs.

Each Lady Cardinal mentioned above had 11 kills in the match.

Gabby Lajuenessa had 25 digs for the Knights, and Sydney May ran the offense with 26 set assists.

Dixon also had nine set assists and Gigliotti seven digs for the Lady Owls who also got six set assists from Lily Wells and five digs from Maddie Dougherty.

Savannah Ross helped run the offense for the Lady Rovers with 12 set assists and added three digs and a kill.

Brockway volleyball is brought to you by Fran Morelli Sales & Service and Morelli’s Family Restaurant.

Kayla Forsythe added 10 kills for the Grape Pickers who also got nine digs from Briell Kings and five digs from Aleksandra Tupper.

Michayla Magee ran the offense for the Bears with 14 set assists and added six digs.

Marley Rodax added nine kills and Eve Pfeiffer six kills for the Cardinals who also got nine aces apiece from Devyn Sokol and Dana Jackson. Cochranton had 24 aces as a team.

Samantha Griebel added eight kills and 14 digs for the Lady Chucks who also got seven kills and six digs from Ciara Toven.

Jenna Wagner and Olivia Hutchinson each added six kills for the Ramblers who also got 16 digs from Jailey Sliker, 10 digs from Nikole McLallen, and six aces and six digs from Maddie Simmerman.

Lilli Mook had a double-double of 24 kills and 14 digs for General McLane with Elaine Corwin adding nine kills and 10 digs and Bailey Cannon five kills.

Mook also had three aces with Rachel LeSuer and Emily Wismer each chipping in two aces. LeSuer also had 13 digs.

Mackenzie Hooftallen had three kills and five aces for Cameron County with Aubree Lorenzo also recording five aces to go with a kill.

Olivia Kulyk added 12 kills, eight digs, and four blocks for the Lakers who also got five kills from Lexi DiFuccia.

Rosalie Carden ran the offense for the Lady Gremlins with 14 set assists and chipped in eight digs and two kills.

Caitlin Stephens ran the offense for West Middlesex with 31 set assists while completing a double-double with 11 digs and adding six aces.

Izzy D’Onofrio had 15 digs in the win and Avery Hanahan added eight digs.

Leigha Nelson ran the offense for the Lady Gators with 31 set assists and added two aces, and Amber Funk had 15 digs from her Libero position.

Sierra Myers had nine kills, seven digs, a block, and an ace for Coudersport with Ava Wahlers adding eight kills, 12 digs, and a block.

Madyson DuBot-Angood ran the offense for the Lady Falcons with 16 set assists while adding six digs.

Marley Kline, Natalie Durish, Sophia Babington, and Taylor Alson each added four kills for the Lady Cats, who used 26 aces to get the easy win.

Lexi Ruckdeschel had a team-high 14 kills to go with 13 digs and five blocks for A-C Valley.

Bella Ielase added nine kills and 19 digs for the Lady Falcons who also got four kills and 10 digs from Mackenzie Parks.

Ava Olosky added two aces, two kills, and a dig for the Lady Tide who also got two kills, a block, and an ace from Lizzy Palmer, and three digs from Brooklyn Price.

Taylor Keener ran the offense for the Muskies with 16 set assists and chipped in six digs and two kills.

Maddy Jones and Alexia Bowers each had eight kills for Warren with Kylie Fehlman adding seven kills and Kirsten Johnson and Carly Beers six kills each.

Lindsay Madigan ran the offense for Warren with 26 set assists.

Sharpsville’s Fry Wins Sept. 26-29 Volleyball Performance of the Week in a Landslide
Pizza Hut Scoreboard: Oct. 6, 2022 Volleyball/Soccer
This website or its third-party tools process personal data.In case of sale of your personal information, you may opt out by using the link Do not sell my personal information.
×
Manage consent