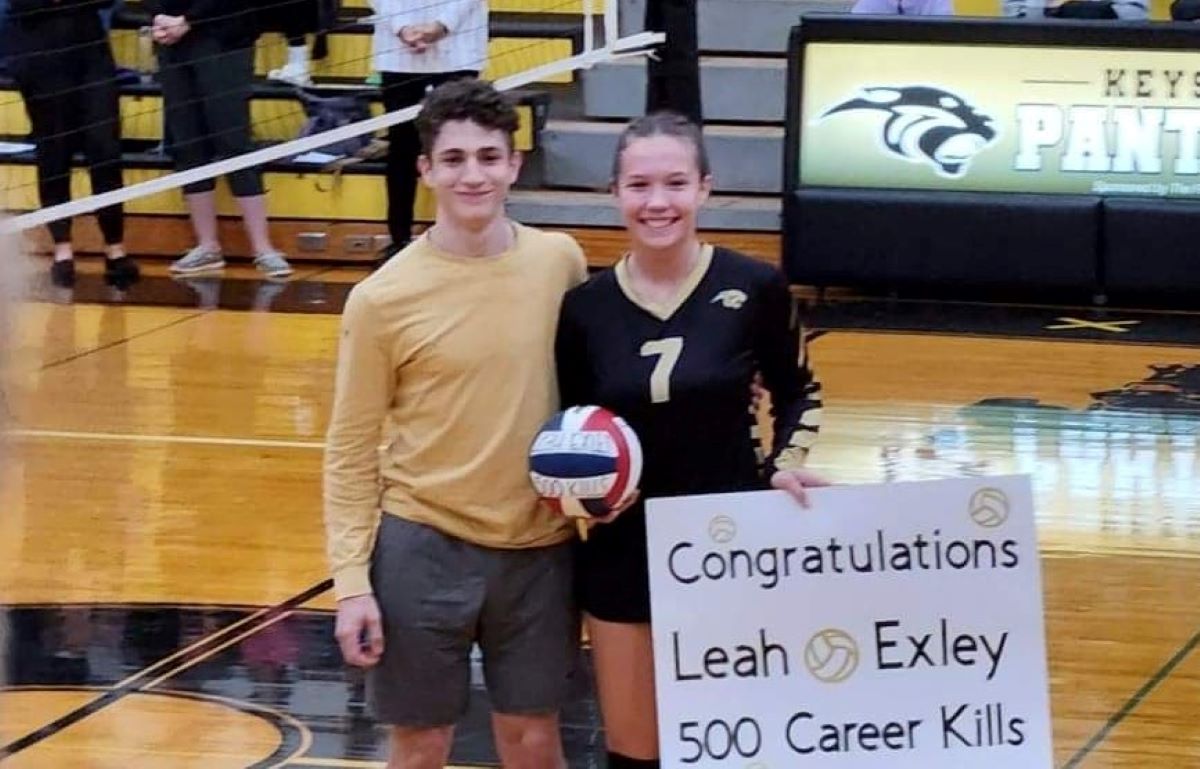 Prior to Keystone's win over North Clarion Monday, Leah Exley was honored for her 500th kill. She then led the Lady Panthers to victory. Submitted photo

Also vote for the Sept. 26-29 Volleyball Performance of the Week

Exley recorded 12 kills and 18 digs in the win with Reagan Mays running the offense with 14 set assists. Sydney Bell also had five kills for Keystone with Cameron Peters recording 15 digs.

Cowan led the way with nine kills and was named Allegheny Grille of Foxburg Player of the Match.

Cowan talked about the win:

Moses had 16 kills, 13 digs, and three blocks for the Lady Gators with Madeline Smith adding 12 kills, 19 digs, and five aces.

Gabby Henry had four kills as did Addy Ruiz for Clearfield with Sam Campolong chipping in three kills.

Julie Monnoyer had three kills and one block for Brookville.

Kylie McAdoo added 13 digs and five aces for the Raiders with Marissa Hillyer chipped in two kills, five digs, and two aces, and Ava Murcko had two kills, four digs, and a block.

The Lady Rovers had 19 aces as a team.

Ava Wahlers had eight kills, nine digs, and an ace in the win, while Madyson Dubots-Angood ran the offense with 15 set assists and chipped in two kills and 11 digs.

Alyn Thomas had six kills, two blocks, and an ace for Smethport with Baylee Fitzsimmons chipping in 23 digs, two kills, and a set assist.

Sydni Hoobler paced the defense for the Knights with 13 digs, and Sydney May ran the offense with 19 set assists.

Lindsey Reiter helped run the offense for the Lady Dutch with 14 set assists while adding four kills and five aces.

Oct. 3, 2022 Soccer: ECC, Bradford, Fairview Girls Get Big Wins; Brockway, KC Boys Triumph
Oct. 4, 2022 Volleyball and Soccer Schedule
This website or its third-party tools process personal data.In case of sale of your personal information, you may opt out by using the link Do not sell my personal information.
×
Manage consent