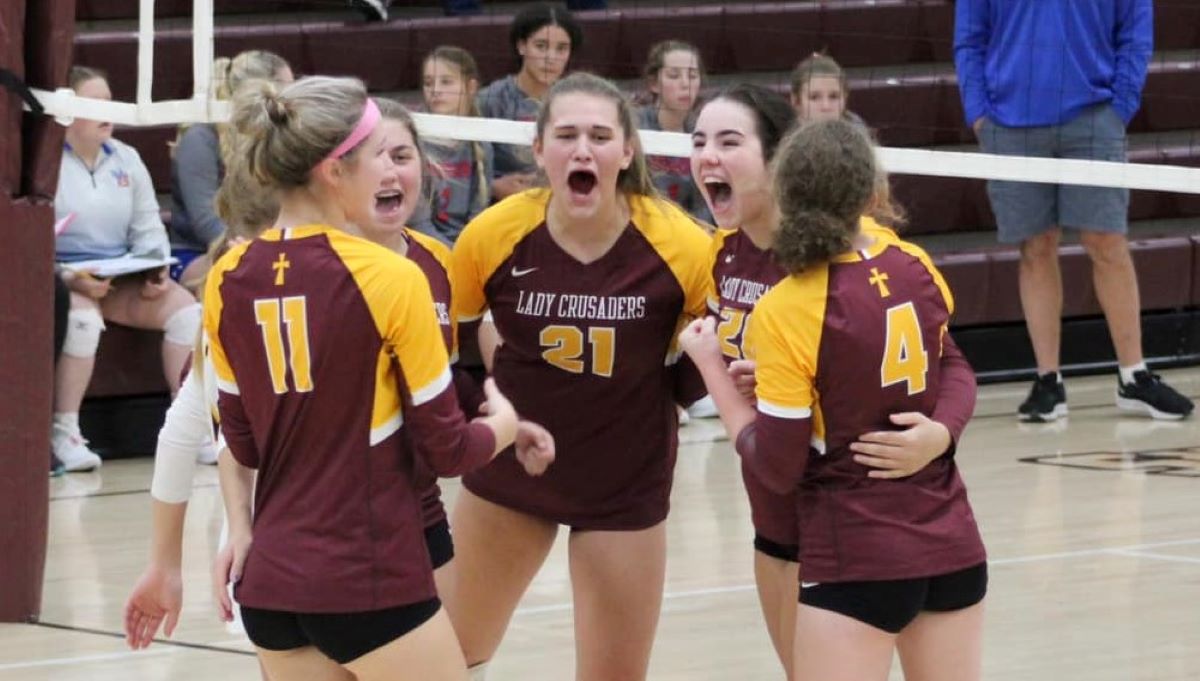 “It was nice to get our first playoff win,” ECC head coach Tricia Bauer said. “I think the girls were a little nervous the first game, but after that game was done they were back to business.”

“It was a good win tonight,” Bauer said. “Our defense came up with some nice plays.”

Emily Eckert set up the offense for the Lady Falcons with 20 assists and added five aces and four digs.

ECC will take on Elk County rival, fifth-seeded Johnsonburg, in the semifinals at 6:30 p.m. Tuesday, Nov. 1, at ECC.

It was a good win tonight. Our defense came up with some nice plays. We are back in action on Tuesday at home at 6:30

“We were able to set the tone early,” said Oswayo Valley coach Ken Kellert. “Especially serves. If you get the serves going, you’ll be fine. And we were.”

Avaree Kellert led the offensive attack for the No. 2 seed Green Wave with 17 kills, 16 digs, and a pair of aces, while Olivia Cook had eight kills and 17 digs.

Kellert was named Allegheny Grille of Foxburg Player of the Match and talked about the win:

After a dominating first set by OV, No. 10 seed Clarion-Limestone jumped out to an early 5-0 lead in the second. The momentum was short-lived, however, as OV rallied to take an 11-8 lead and never looked back.

Praylan Perkins had 21 digs, four kills, and two aces for the Green Wave, while Trinity Lundy had 26 set assists, 10 digs, and three aces.

“That’s such a big thing, having the home crowd,” coach Kellert said. “That helps a lot.”

“I have so much respect for the girls on my team and how they carry themselves through both wins and losses,” Troupe said. “This was tough for many reasons, but they fought until the final point, and that makes me proud.”

Oswayo Valley advances to play No. 6 seed Clarion, a 3-0 winner over No. 3 Otto-Eldred. OV and Clarion met for the D9 title a season ago, won by Clarion en route to their second consecutive state title. That match is set for 6:30 p.m. Tuesday, Nov. 1.

“The nice thing about this year is they have to come here,” coach Kellert said. “Hopefully we’ll play well like we did tonight and push themselves. I think they’ll be fine.”

“It means a lot to get back to the semifinals,” sophomore Hadlee Campbell said. “Last year we graduated Korrin (Burns), Jordan (Best), Peyton (Simko), and Noel (Anthony). A lot of people didn’t believe we would make it (this year). We are showing right now that we can. It means a lot to us.”

The Lady Cats struggled early and trailed 9-6 in the first set before using a 9-3 run to take control of the set.

On the night, Girvan had 20 kills and eight digs and Campbell provided six aces, six kills, and 11 digs.

“I have been struggling with my serve a little bit,” Campbell said. “I just had to get the mindset of getting it over first. Now I am trying to get back into serving it a little tougher. We are just progressing as we go.”

Campbell was named the Allegheny Grille of Foxburg Player of the Match. Watch her full postgame interview.

In the second set, Otto-Eldred pushed Clarion as much as anyone has over the past three seasons taking a 22-21 lead on the Lady Cats.

But, following a Clarion timeout, the Lady Cats rolled off the final four points to win the set before cruising to victory in the third set.

Grace Ochs ran the offense for the Lady Cats with 32 set assists while chipping in six digs and a kill.

Clarion will travel to second-seeded Oswayo Valley for a semifinal contest at 6:30 p.m. Tuesday, Nov. 1. It is a rematch of last year’s championship contest won by Clarion, 3-0.

Annasophia Stauffer and Julia Jones each added eight kills for the Ramettes with Ella Lindberg chipping in with five kills.

Abby King ran the offense for Johnsonburg with 26 set assists while chipping in five digs and a kill.

WARREN 3, CATHEDRAL PREP 0
MEADVILLE, Pa. – Warren held off a late Cathedral Prep rally, that included a reversal on what the Dragons thought was the match-winner, to complete a 3-0 (25-19, 25-18, 28-26) sweep in the District 10 Class 3A quarterfinals on Thursday.

Warren had match point at 24-19 in the third set, but Cathedral Prep rallied to get within two at 24-22. The Dragons thought they had the match won on the next point as Carly Beers sent an attack down the line. Officials initially ruled that the ball went out of play after being touched by a Rambler, they then gathered and reversed the call, giving the point to Cathedral Prep.

“Well, it got a little tight at the end but we made plays when we needed to,” Warren coach Mike Dolan said. “Our offense looked good, we had 41 kills many of which were made possible by solid defense all around.”

Alexia Bowers had a double-double for the Dragons with 10 kills and 14 digs. Kylie Fehlman had 12 kills, while Maddy Jones, Beers, and Kirsten Johnson had six kills each. Jones added 10 digs and two aces, and Beers had eight digs and three aces. Summer Lucks had 14 digs and Lindsay Madigan had 35 assists and two aces.

“Kylie Fehlman was consistently good all night,” Dolan said. “Lindsay and Summer worked well together again. Carly Beers’ serving was terrific, keeping them off balance on a couple of key serving runs.”

Warren will face Meadville in the D10 semifinals on Thursday, Nov. 3 at a time and location to be announced. The Bulldogs came away with a 3-1 win over the Dragons in the regular season finale for both teams.

Dolan said facing a tough challenge like the one the Ramblers presented in the quarterfinals should get Warren ready for the rematch with Meadville.

“It’s good to get a win against a pretty physical team and hopefully it helped prepare us for a very good Meadville team next week,” Dolan said.

Abby Ball ran the offense for the Lancers with 18 set assists.

Hickory will face top-seeded Conneaut in the semifinals Thursday, Nov. 3.

“What a match tonight,” St. Marys head coach Missy Nicklas said. “Hats off to all the girls. They played hard, played together, and battled, especially when we were faced with out-of-system balls.”

St. Marys will face DuBois in the District 9 Class 3A title game Monday, Oct. 31, at a time and place to be determined.

Oct. 27 Playoff Soccer: Elk County Catholic Boys, Harbor Creek Girls Notch Upset Wins
Cathedral Prep Advances to Semis in PIAA Class 2A Team Tennis
This website or its third-party tools process personal data.In case of sale of your personal information, you may opt out by using the link Do not sell my personal information.
×
Manage consent