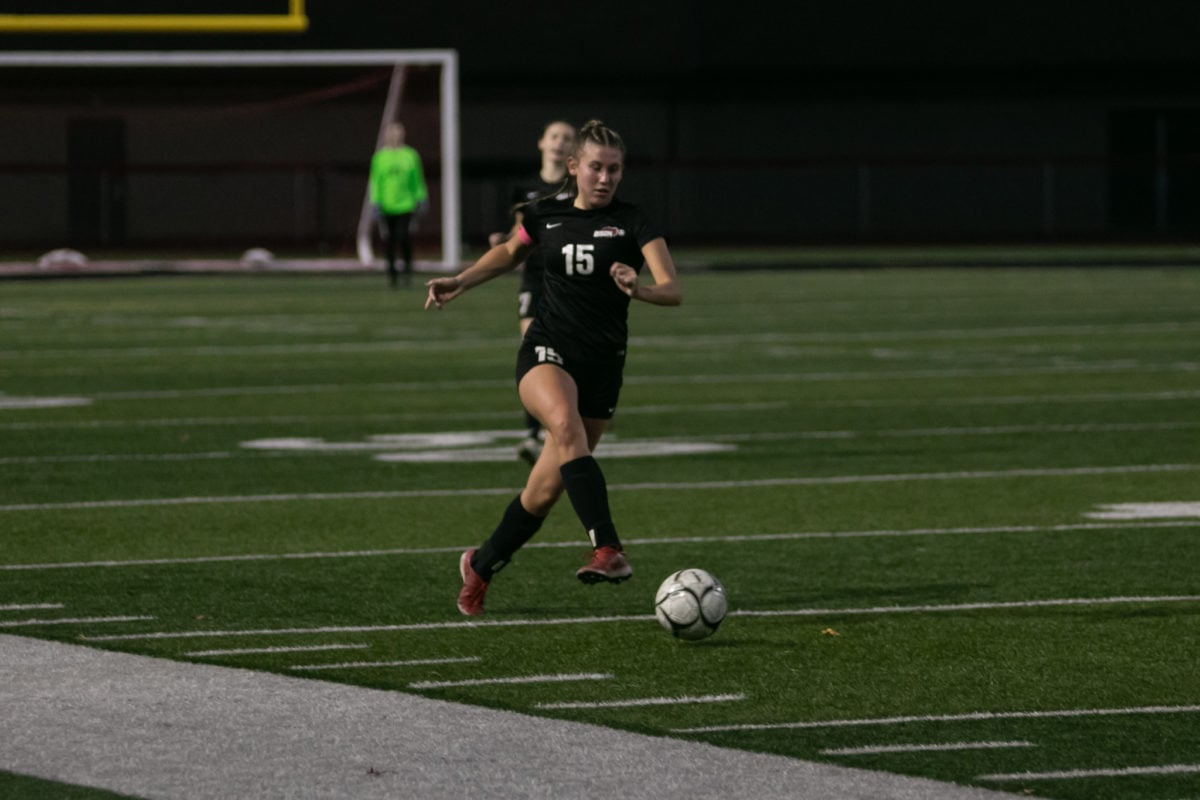 Smith got the Lady Bison on the board first at the 8:14 mark with a shot from the top of the penalty arc.

“It was crazy to get up real fast,” Smith said on scoring the first goal. “It felt good to get the first goal and get everyone going.”

From midfield, Smith set up Emma Hipps on a breakaway where she buried a shot to the left of Brookville keeper Jordan Cook to extend the lead to 2-0 at the 10:02 mark.

“I was looking for her on that backside,” Smith said on assisting the Hipps goal. “She’s always there and it was just routine at that point.”

McKenna Lanager would score less than two minutes later with an assist from Smith.

Smith would notch her second goal of the game about halfway through the first half and extended the lead to 4-0.

At 22:36, Hipps set up Riley Ryen for a goal where her initial shot from the left side went off the post but would deflect off her into the net from her forward momentum.

Megan Hamm netted the next two goals, one at 24:43 and the second at 32:25. Smith assisted Hamm on her second goal of the game.

Abby Ryan capped off the first half scoring with a goal at 37:30 and the Lady Bison took a 8-0 lead into halftime.

The Lady Raiders managed their one and only shot of the game in the first half.

Clearfield’s defense stepped up and kept Brookville from getting any real chances in the second half.

“The defense played great today,” Smith said. “They were good at possessing it and bringing it out of the back instead of just clearing it long.”

The second half was no different for the Lady Bison as Smith scored her third goal four minutes into the second half.

Alayna Winters set up Hipps’ second goal with a pass from the left side of the field to the right side where Hipps was wide open for the shot.

Cook made nine saves for the Lady Raiders in the loss.

Clearfield will get a rematch of last year’s title game with second-seeded Karns City in the 2A title game at Frank Varischetti Field in Brockway at 7 p.m. Thursday, Nov. 4.

The Lady Bison won 5-4 last year over the Lady Gremlins and ended their eight-year streak of District 9 titles.

MARIENVILLE, Pa. – Soccer can be a funny game sometimes.

Elk County Catholic dominated time of possession, especially in the second half, in its District 9 Class 1A girls’ semifinal game against Forest Area at East Forest but needed a Lady Fires own goal to secure a 1-0 win.

The Lady Crusaders had 12 corner kicks in the game only to see each one stopped by the Forest Area defense, but a seemingly innocent play over the middle proved to be the difference.

ECC’s Riley Belsole threw a ball laterally across the box where Forest Area’s Maria Bauer went to play the ball. ECC’s Shawna VanAlstine converged on Bauer and the ball was kicked toward the Forest Area net.

Lady Fires keeper Emma McFarland seemed to have a beat on the ball, but just as she was about to catch it her teammate, Addison Siegel, went up to head the ball and accidentally headed into her own net.

Down 1-0, Forest Area came hard in the final five minutes of the game and had three golden opportunities late in the contest only to have ECC keep Alli Geci deny both.

First, with about 2:10 to play Amber Guzzi had a golden chance in front only to see Geci knock the ball wide of the cage on Guzzi’s shot.

That led to a corner kick that saw the ball come to Oliva Siegel in front of the net, but her shot was thwarted by Geci.

Finally, with around 43 seconds to play, Emily Best got free but saw her shot go just wide.

Prior to that barrage, the play in the second half was nearly all on the ECC offensive side of the field with the Lady Crusaders earning six corner kicks only to see Forest Area and McFarland turn away each one.

Forest Area’s best scoring chance of the second half came early in the half when a pass across the box was just out of the reach of a Lady Fire player.

The best scoring chance for the Lady Crusaders came late in the half when McFarland was able to thwart an attack right at the corner of the cage.

ECC advances to the District 9 Class 1A title game where it will face the winner of Thursday’s semifinal game between fifth-seeded Clarion and top-seeded Brockway. The title game will be played Nov. 2 at a time and place to be announced.

KARNS CITY, Pa. – No. 2 seed Karns City took care of business on Wednesday, beating No. 3 seed St. Marys 9-0 and setting up a showdown with Clearfield in the D9 title game.

McKenna Martin scored two goals, while Avah Burke, Rylee Miller and Taylor Miller also found the back of the net for Karns City.

DUBOIS, Pa. – Clearfield’s Hunter McKinney scored less than three minutes into the game as Clearfield upended DuBois 4-0 to earn a date with Bradford in the D9 championship game.

It was one of two goals in the game for McKinney. The Bison led 2-0 at halftime.

Cole Miller and Evan Davis also found the back of the net for Clearfield, with McKinney adding an assist.

Todd Hallman had the shutout in net.